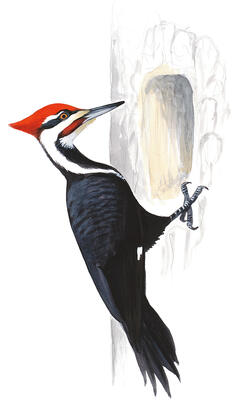 Like a jazz player beating out a drum roll, a woodpecker uses its bill to rap out a brisk series of notes.

Early spring resounds with the percussive hammering of woodpeckers. Their rhythmic drumming works like many birds’ songs: it broadcasts to other woodpeckers over a long distance a clear assertion of territorial and mating rights.

We also hear woodpeckers knocking on wood when they're carving holes in trees to create nest cavities or extract insect prey, but these whacks are more methodical

Woodpeckers offer a fascinating cast of drummers. A hefty Pileated Woodpecker lets go a resounding tattoo against a hollow trunk. A Yellow-bellied Sapsucker seems to be signaling in Morse code, as it snaps its bill against a stub of dead branch. And the little Downy Woodpecker’s drum roll seems rather modest—rather short and not too fast.

For any woodpecker, it’s all about proclaiming a sound signal as far and as loud as possible. And as it searches for the most resonant drum, it might just find that your metal rain-gutter makes the best music.