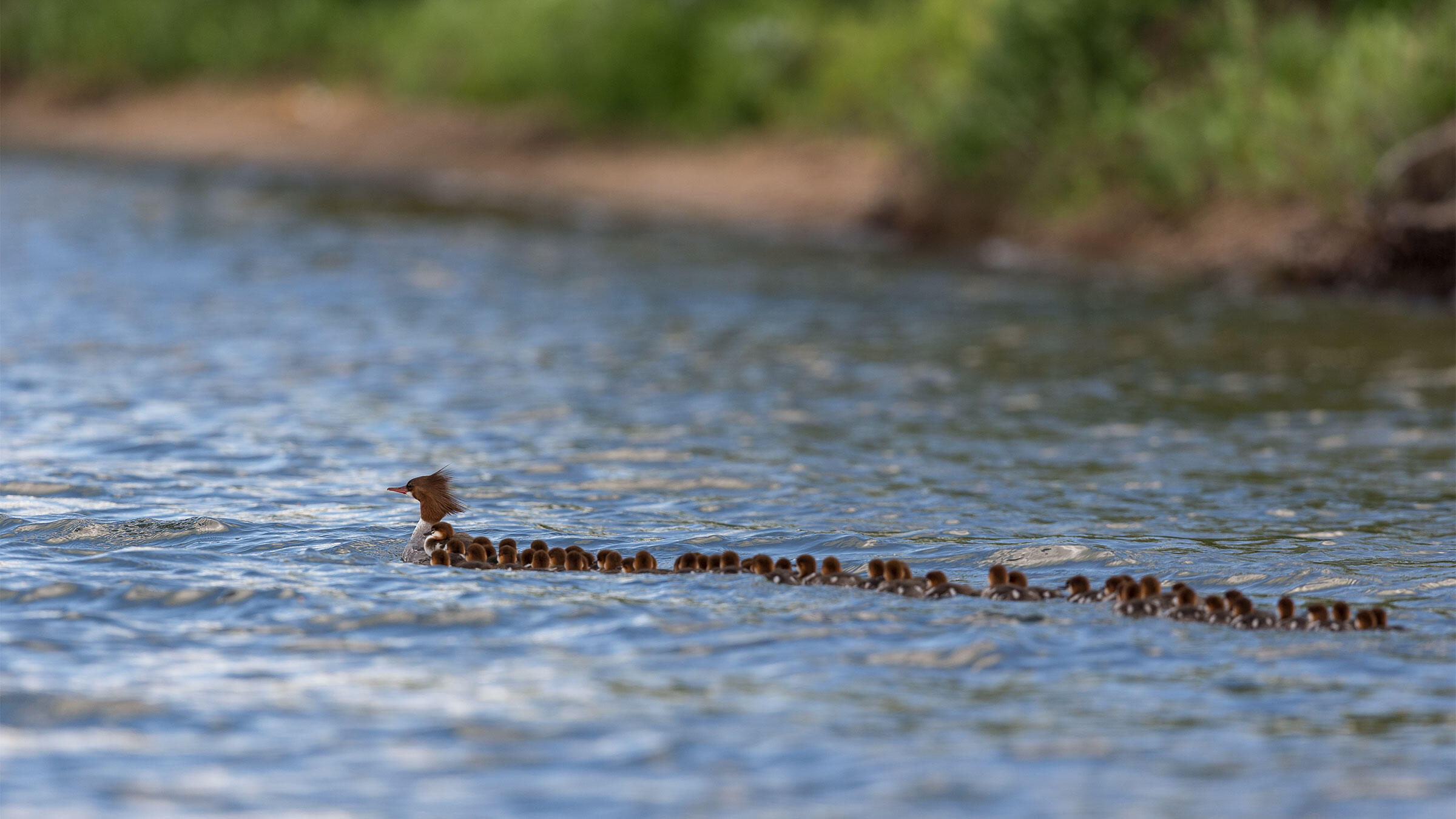 Here's Why This Mama Merganser Has More Than 50 Ducklings

A photographer in Minnesota recently captured an adorable shot of a Common Merganser followed by dozens of fuzzy babies.

Update, July 17: Brent Cizek, the photographer of the above image, says he has since spotted the mother with another two dozen ducklings, bringing her total up to 76.

Choppy waves bounced Brent Cizek’s small plastic boat as he headed for the shore of Lake Bemidji in Minnesota, hoping to beat a fast approaching summer storm. An amateur wildlife photographer, Cizek had decided to brave the late-afternoon winds to scope out the lakeshore for future shoots. He’d only brought one lens, thinking he might get a shot of a mallard he’d seen the day before, but wasn’t expecting to photograph anything special.

Then, as he motored toward the boat slip, Cizek saw something remarkable: a female Common Merganser surrounded by more than 50 little ducklings. While Cizek watched, the little mergansers formed a long, orderly line behind their mom and began swimming away. The scene was too good to pass up.

“I probably shot 50 pictures, and I was just praying that one was going to turn out sharp because the waves were so strong it was nearly impossible to even keep them in the frame,” Cizek says. To further complicate things, he had to alternate between maneuvering his little trolling motor and quickly snapping pictures. “Luckily enough, just one picture turned out.”

Cizek says he has been photographing wildlife in his spare time for about two years and only recently became interested in birds. Last year, he saw a Common Goldeneye with 20 ducklings in tow and thought that was extraordinary. He had no idea ducks could care for so many ducklings—much less 50.

While 50 is definitely on the high end, such big brood counts are actually pretty common, says Kenn Kaufman, field editor for Audubon. This is at least partly because ducks often lay their eggs in the nests of other ducks. In fact, Kaufman says a female duck will have a nest of her own and also make her way over to another nest or two to drop off a few eggs.

While 50 is definitely on the high end, such big brood counts are actually pretty common.

Scientists aren’t sure exactly why ducks do this, but it could effectively serve as a reproductive insurance policy. If a raccoon invades a merganser nest and destroys all the eggs, the female still has more offspring being safely incubated in other nests. “One possibility would be, in a sense, not putting all their eggs in one basket,” Kaufman says.

This behavior doesn’t completely explain Cizek’s photograph, though, because there is a limit to how many eggs one duck can successfully incubate. Female ducks lay about a dozen eggs and can incubate as many as 20, says Kaufman. More than that, and the birds can’t keep all the eggs warm.

The merganser in this picture probably picked up several dozen ducklings that got separated from their mothers. Adult ducks can’t tell which birds are theirs, and lost young birds that have already imprinted on their own mothers will instinctively start following another Common Merganser because she looks like mom.

Since posting his picture online, Cizek says he’s been able to keep tracking the birds virtually, as other people in Bemidji, Minnesota, report seeing the giant brood make its way around town. This mother duck will tend to her ducklings for a couple more weeks, until the little birds are big enough to defend themselves. At that point, they will leave the group, and if they are females, one day potentially end up adopting a few dozens ducklings of their own.