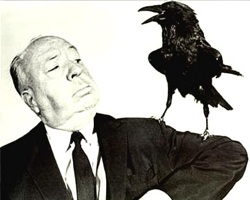 Bodies were piling up, and crime scene investigators were closing in on their killer. Soon another TV forensic mystery would be solved. But something was off: CSI had the wrong bird. A house wren—common dweller of woodlots and suburban backyards—was calling from the desert.

Despite paying meticulous attention to other details
that bring movies and TV shows to life, Hollywood is notorious for blundering when it comes to casting birds.

“In my experience, inaccuracy is the norm,” says bird guide author and Audubon magazine field editor Kenn Kaufman. “It’s typical and expected for films to have the wrong bird sounds in the background. Which is sort of bizarre when you consider how much birdsong lends to a sense of place. Even if you don’t know what the birds are, you still might associate the sounds with the place if you’ve been there.”

In fact, Tinsel Town has a long history of making bird mistakes, says Kaufmann. “In 1948, in his book Birds Over America, Roger Tory Peterson wrote about it. He pointed out that typical California birds could often be heard in the background in films that were supposedly set elsewhere. (He even joked about how Hollywood had extended the known range of some of those birds.)”

Kaufmann: “Crimes of the Heart. It was supposed to be set in the Deep South, but the soundtrack included a cacophony of birds found elsewhere: shorebirds on the tundra, sparrows of the northern prairies, etc. It stands out in my memory as the most diverse, and inaccurate, set of birds I've heard in any film.

“At the opposite extreme, the best/most accurate bird background sounds I've ever heard were in The Piano, directed by Jane Campion. It was set in New Zealand, and everything I heard in the background was in fact an expected New Zealand bird (many of which have very distinctive voices).”

David Allen Sibley: “One of my personal favorites is in one of the Indiana Jones movies. The opening scene in a steamy tropical jungle includes the sound of a displaying male Willow Ptarmigan [a bird of the Arctic tundra]. Another, like many other examples, was a movie set in the Colorado Rockies in winter that included Alder Flycatcher and Mourning Warbler singing, both extremely rare in Colorado at any season, absent from the US in winter, and I think the scene had them singing at night!”

Greg Butcher: "In Dances with Wolves, a bunch of doves is shown on the ground near Kevin Costner. One of them is a Ringed Turtle-Dove, which is basically a domestic version of an African dove. Definitely not something that would have been found in the Wild West 140 years ago."

Have you caught one of Hollywood's bird bloopers? Drop us a comment. We want to hear about it.