Carol McIntyre spent her childhood mostly oblivious to birds, and that indifference followed her into adulthood. But in the autumn of 1977, when she was a college student, everything changed. McIntyre and her friends were hiking along the Appalachian Trail in New Jersey when they crested a ridge and came across a group of birders. The birders had their binoculars trained on hundreds of migrating Broad-winged Hawks, swirling up in a formation called a kettle. “I had never seen anything like that before in my life,” McIntyre says. “It was pretty magnificent.”

As she listened to the birders describe where the hawks had come from and where they were likely going—thousands of miles to the south—McIntyre grew transfixed. “I’m not really sure why it hit, but boy it hit hard,” she says. McIntyre went back to that same ridge the following weekend. And then she changed her major from landscape architecture to biology so that she could learn as much as possible about raptors.

Today, McIntyre, a wildlife biologist in Denali National Park and Preserve, is a rock star among raptor biologists. For the past 30 years, she has conducted one of the longest-running population studies of Golden Eagles in the world. “Because she studies an apex predator, Carol’s work has illuminated much about the way the whole tundra ecosystem of central Alaska works,” says Scott Weidensaul, an author and naturalist who has worked with McIntyre. “Given how drastically the Arctic and subarctic are changing as the climate warms, her incredible baseline—not only on eagles but on songbirds, mammal populations, and much else—is profoundly important.”  McIntyre’s research, for example, shows that the laying rates of Alaska’s Golden Eagles are closely tied to the abundance of snowshoe hares, one of the birds’ primary food sources. When hare populations peak, more eagles lay eggs.

McIntyre also helped solve a longstanding mystery: Where do Denali’s juvenile Golden Eagles go after they leave the park? When she arrived in Denali in 1987, not much was known about the migration patterns of the species. These majestic birds breed in the north, but each fall they travel thousands of miles to their winter homes. McIntyre could only speculate about where they went because she didn’t have any way to track them. Many of the birds in Denali wear leg bands, but sightings in the south were rare. And the radio transmitters biologists use to track other wildlife didn’t have a long enough range.

In 1997, however, McIntyre got the go ahead to use of a new kind of satellite transmitter that could keep tabs on the birds even across long distances. She spent the summer using a rope and a harness to rappel into eagle nests so she could fit 21 eaglets with transmitters, and then she anxiously waited for them fly south. “We didn’t know whether the birds would all go to a similar area like some species do, or whether they would be spread across a very large area,” she says.

McIntyre learned that the eagles didn’t overwinter in a single spot.

The eagles finally made their move, and McIntyre tracked them from her office in Fairbanks as they flew across the Canadian plains. McIntyre learned that the eagles didn’t overwinter in a single spot. Their winter territory stretched from central Alberta to southern New Mexico. And when the juvenile eagles returned, they didn’t come back to Denali. Instead many “hightailed it to the Arctic coastal plain,” she says, a destination that added another 500 miles to their trip. McIntyre suspects this is a good survival strategy for eagles too young to breed. On the coast, where Golden Eagles rarely nest, they can find plenty of food and avoid accidentally wandering into the territories of breeding adults. In three years, McIntyre tracked 48 birds, and learned more about the Golden Eagles’ movements than she had in the previous 10.

Some people might find living in Alaska isolating, but McIntyre enjoys the wildness. As a child, she witnessed the tiny farming community in New Jersey where she grew up succumb to the incessant creep of suburbia. "When they started putting surveyors stakes out in farm fields, I was the kid out there pulling them up,” she says. Alaska isn’t immune to development pressures, but they do feel less intense. She can still hitch up her team of sled dogs and drive them nearly 100 miles to the Yukon River without crossing a single road. And of course she keeps an eye out for birds along the way, not just Golden Eagles, but Arctic Warblers and Common Redpolls, too. “I have a great appreciation for every feathered friend out there,” McIntyre says. “I can't even imagine my life without birds.” 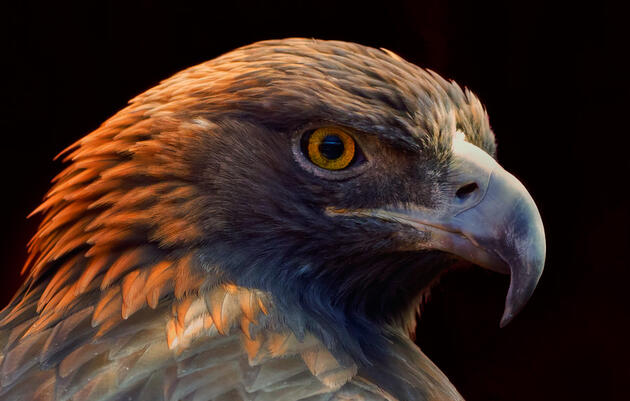 The secret is in the density of their visual cells. 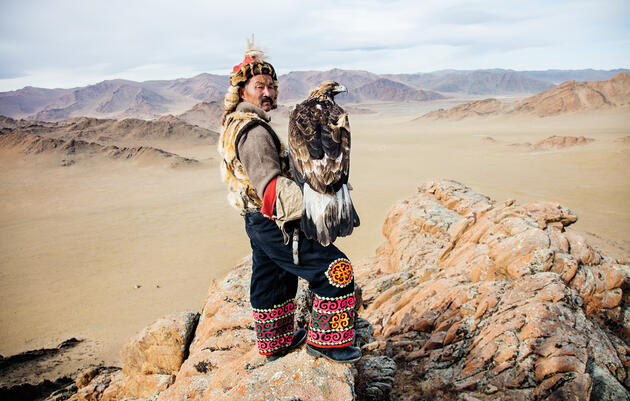 Since the time of Kublai Kahn, the Kazakh people have allied with raptors to find sustenance in a barren, mountainous land. 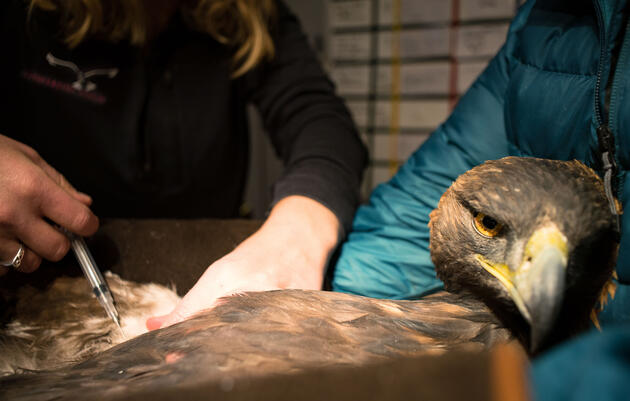 With only three raptor rehab centers, the state relies on a network of dedicated volunteers to shuttle injured eagles, hawks, and owls for treatment.