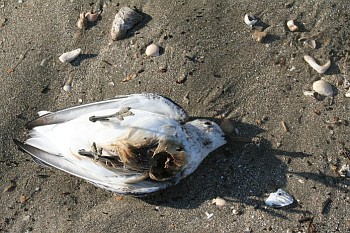 Last week at a Deepwater Horizon response press conference, Federal On-Scene Coordinator Adm. Paul Zukunft told National Public Radio’s Debbie Elliott, “We did have you know certainly a loss of wildlife, but in comparison we had about 2300 dead oil birds and Exxon Valdez, that number was nearly 225,000. So again, the impact could have been much worse than what it was.”

But it is too early to know what the impact of the Deepwater Horizon spill has been, or will be, on bird populations. We do know that the count of carcasses, and the number of live, oiled birds that are rehabilitated, does not begin to enumerate the impact of the spill on populations. It does not reveal the actual death toll, nor the cost to birds in terms of their long-term ability to survive and reproduce. The complexities are numerous and lead to confusion when bird numbers are reported publicly.

Comparing the count of dead birds that were collected with oil visible on their feathers from the Deepwater Horizon spill to the estimated toll from the Exxon Valdez oil spill is like comparing, well, apples to zebras. The 2,263 birds collected dead with visible oil on their bodies is an actual count done, as all actual counts are done, imperfectly. The 225,000 from the Exxon Valdez is an estimate, calculated with a complex algorithm incorporating the death toll, numbers of oiled, live birds, and models and other estimates to create an educated, scientific guess about how many birds died.

An estimate will also be calculated for the Deepwater Horizon spill, as it is for all oil spills, by scientists from the federal and state governments, as well as scientists from universities and nongovernmental organizations. This is part of a process is called the Natural Resource Damage Assessment – the official way to assess the damage to the natural resources, the birds, fish, marine species, marsh, beaches, waters, from a human-caused disaster. It is called an assessment because the final number reached, the impact, will be assessed against, or charged to, BP – a fine for how much damage they caused to the natural resources of the Gulf of Mexico.

To calculate the estimated loss, scientists will try to understand what proportion of the actual death toll the collected birds represent. For the Exxon Valdez spill, they estimated that the collected dead birds represented somewhere between 10 and 30 percent of the actual number of birds killed. If those numbers held true for the Deepwater Horizon, the estimate would be somewhere between 7,000 and 23,000 birds killed.

But the percentage of birds collected will not be the same, and it may be more difficult to calculate accurately for the Deepwater Horizon disaster. Most of the birds that were collected dead were collected on land – a few tiny islands in the Gulf of Mexico. Much of the effort of searching for birds was focused on the breeding colonies because the majority of birds that could be captured alive or collected dead would be found on those islands. Thus, the total area of oiled islands is a tiny fraction of the total area of Gulf of Mexico waters into which oiled birds may have disappeared.

In many of our nation’s notable spills, the oil has spilled close to shore. Scientists can drop a number of chicken carcasses into water the same distance from shore, then count the ones that reach shore to estimate how many birds that died in the water might have reached land. My guess is that a chicken carcass dropped 50 miles away from the Gulf Coast shoreline would never reach land.

In addition, many dead birds could not be collected from breeding islands without causing unwarranted harm to the breeding colonies. Many decisions that were made to protect the colonies during the breeding season interfered with the ability to collect accurate data on the impacts of the oil spill. This choice, though difficult, was ultimately more protective of the populations of birds. And that is the right choice – to protect the living over counting the dead.

Dead, oiled birds were collected from the barrier islands at the end of the nesting season. I have spoken with some of the officials conducting the counts, and they are well aware that the bodies under-represent the death toll. The barrier islands bake in the sun, are sometimes over-washed by waves, and may be invaded by predators. Birds that died weeks or months before the islands were searched may have decomposed beyond recognition, or been eaten by predators, or been dragged or washed away. Searchers could not collect piles of feathers to count, because they could not identify which piles may have represented one bird, or two, or several. So, they only collected identifiable bodies. Birds that were lightly oiled with this light, sweet crude may have shown no visible signs of oiling, and thus not been collected or counted. These ‘missing’ bodies will have to be estimated, also, in some way, to add to the damage assessment.

Throughout the oil spill, until the past few weeks, trained personnel from the U.S. Fish and Wildlife Service and other groups involved in the Natural Resource Damage Assessment also boated around the islands and walked the Gulf Coast counting birds that showed visible signs of oiling, or visible signs of sickness. They reported those birds to the oiled wildlife hotline and will count them as part of the damage assessment process. It is also certain that some oiled birds were not counted. They were too far away, or the oil was simply not visible to the searchers. Again, it is not the actual count that will be used, but an estimate from that count.

Of course, this accounting of the birds killed outright in the height of the crisis is only one concern. There could be long-term effects on the survival or ability to reproduce of birds that ingested oil, were exposed to chemicals, or were otherwise stressed during the spill. There are still many questions about the effects that will be more difficult to trace, such as birds having to work harder to feed themselves if food becomes more scarce, and birds that either starve or cannot raise their young because food is in short supply. For a more complete description of the long-term, subtle effects that concern us, see our recent report, “Oil and Birds: Too Close for Comfort.”

Nobody likes the answer “It’s complicated.” And, anything said in less than a sound bite is left out of most media reports. But the counting of birds is complicated, and the estimates of actual damages, more complicated. That is why we have science, algorithms, computer models, and field tests to estimate factors to go into those models. From months to years of work, one number will be reported. That number will only be reported when the lawsuits are settled and the final Natural Resource Damage Assessment can be reported. If that number is compared by an official or by the media to an actual death toll in the future, people will be confused, concerned, and outraged. But that number will not be, for the Deepwater Horizon, 2,263. And while it will not be completely accurate, it will be the best that we can estimate.

BP must be held accountable for the damage it has caused to our natural resources. The state and federal governments must act to direct penalties toward environmental restoration and pass laws to prevent an uncontrolled spill like this in the future. NRDA must be carried out with rigor, integrity, and transparency. Audubon has advocated for the birds, the coast, and our other natural resources throughout this oil spill, and we will continue to do so. We will continue to call for appropriate penalties, and to insist that they be used to restore these ecosystems that are so vital for birds and for our human communities.