Some of us are born with wanderlust, but what exactly spurs a bird to journey thousands of miles each year? The answer is in part genetic, and a recent study of yellow-rumped warblers in the journal Evolution reveals how changes over generations could improve a bird's abilities to become a master, long-distance flyer.

The research, conducted by zoologists and physiologists at the University of British Columbia, began with a genetic puzzle. There are four different groups of yellow-rumped warblers, each distinct in behavior and appearance: the Goldman’s, myrtle, Audubon’s, and black-fronted. Their genes, however, tell a different story.

Examining DNA obtained from the nucleus of these birds’ blood cells revealed that the Audubon’s and black-fronted warblers were indistinguishable. In other words, these birds are so closely related that, despite different appearances and the fact that Audubon’s migrate whereas black-fronteds don’t, these birds can’t be recognized as different species.

“We know that myrtle warblers hybridize extensively,” says University of British Columbia zoologist David Toews. So he wasn’t surprised to see a little mixing in the yellow-rumped gene pool. But Toews and his collaborators suspected that the mitochondrial DNA could explain migration differences between individual Audubon’s warblers.

Toews team studied 225 yellow-rumped warblers, conducting gene sequencing and studying hydrogen isotopes in their feathers—a technique that allowed them to reconstruct roughly were a bird had spent the winter and summer. (For a more detailed look at the study methods, check out Grrl Scientist’s post on The Guardian.)

Toews and colleagues found that Audubon’s warblers with migratory myrtle DNA make longer annual journeys than those with mitochondrial DNA from the black-fronted warbler. In addition, studies of muscle material revealed that the mitochondria in myrtle’s DNA may produce energy more efficiently for cells. This difference could mean that Audubon’s warblers that carry these key myrtle genes are better long-distance travelers.

So what does this tell us about the yellow-rumped family tree? Black-fronted and Audubon’s warblers come from the same group of birds. It's probable that the early Audubon's group did a little migrating, perhaps because their range experienced more seasonal changes. But at some point, a few began breeding with traveling myrtles and the genetic mixing created hybrids with a special advantage. Their myrtle DNA made them better at migration, enabling them to expand their range, and in turn gave them survival and reproductive advantages in certain locations. Eventually, these mixed migrating birds became the modern Audubon’s warbler.

Today, some of these birds travel much smaller distances, constrained by the genes passed on by black-fronted ancestors, while others travel wider swathes of North America, doing their myrtle foremothers proud. 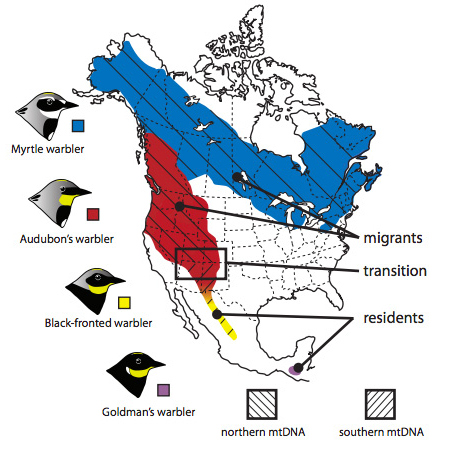