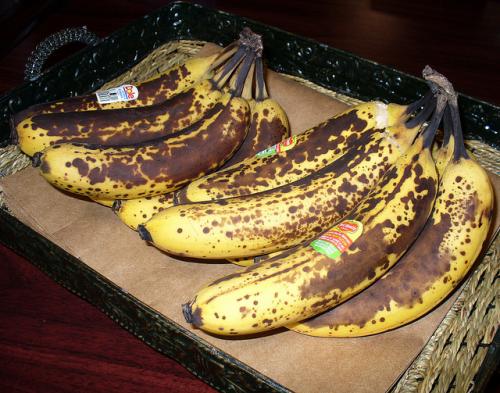 This weekend, as I was packing away this week’s groceries on top of an unopened container of spinach and some other week-old produce, I realized just how easy it is to waste food. In my house, if we’re not careful produce ends up pushed to the back of the refrigerator. When we rediscover it, it’s often a little less new and shiny, so we toss it in the trash.
My family isn’t alone in this practice. Americans threw away more than 33 million tons of food in 2010, according to the most recent estimates by the EPA. And around 40 percent of food goes uneaten in the U.S., the equivalent of $165 billion a year, a study by the National Resources Defense Council found in August.
The waste occurs in all the stages of the food supply process. It begins from the moment crops are harvested to when they hit grocery store shelves, and continues into our homes, where poor planning and misinformation lead us to throw out 25 percent of our food, according to the NRDC report.
Not only can it be a strain on your budget, but all that discarded food has a terrible environmental impact. Rotting food in landfills produces methane, which the EPA reports is 21 times more harmul to the environment than carbon dioxide.
One of the easiest ways to combat the problem is to actually eat the food we buy, which is easier said than done. I find bananas with dark brown spots extremely distasteful, but that doesn’t mean they can’t be used.
In fact, tons of fruits and veggies can be repurposed even when they aren’t so cosmetically pleasing.
Here are a couple recipes that incorporate “old” food. Use this as a guide, but just make sure not to eat anything moldy or rotting! At that point, it’s probably too late.
Apples
Shelf life: Depending on the type, 6-8 weeks in the refrigerator and up to two weeks when stored at room temperature
How to save them: Make them into pies and tarts, where baking will soften them up and mask minor dents and blemishes.
Apple pie from Martha Stewart
Bananas
Shelf Life: 2-5 days at room temperature (can be frozen for months!)
How to save them: Peel and cut into slices and freeze in freezer bags. The cold stops it from ripening further, giving you some time to pop them into smoothies.
Try this easy Berry Banana smoothie.
Or bake them into pastries. Banana Chocolate Bread from Martha Stewart
Peppers
Shelf life: Approximately 1 week
How to use it: Peppers start looking a little wrinkly after a while, and it becomes a little less fun to eat them fresh. But roasting, saut