By Jane Alexander and Jeff Wells 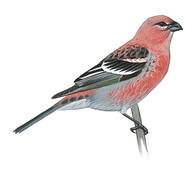 Throughout the long, cold Covid winter, we, like so many others, have found moments of joy in observing the natural world around us. Birds have been a particularly special part of that time, helping us remain connected to the world and to each other. We have watched little white-throated sparrows scratching for seed under backyard bird feeders, puffy-headed black-and-white Bufflehead ducks bobbing in sheltered coastal coves, and flocks of mellow, rosy-colored Pine Grosbeaks quietly devouring last years dried fruits in crabapple trees in city parks.

These are among billions of birds, of hundreds of species, that nest in the Boreal Forest region of Canada and Alaska but come south to winter in southern Canada, the U.S., Mexico and throughout Latin America and the Caribbean. Some shift as far south as Chile and Argentina. This connection is especially profound between the birds and the people of Canada and the U.S. An estimated one billion birds that nest in the Boreal Forest of Canada migrate south to spend the winter in the U.S.

The virtual Leaders Summit on Climate that President Biden will host next week on April 22 and 23 is an opportunity for the U.S. and Canada to showcase their special bond. The two countries can demonstrate a vision for addressing climate change in ways that promote values of reconciliation and equity while simultaneously protecting intact forests, grasslands, wetlands and other ecosystems as well as the birds and other wildlife that thrive in those habitats.

Both Canada and the U.S. publicly declared ambitious intentions around these ideals in the early weeks of 2021. The administrations leading both countries have embraced the idea of establishing a new kind of reconciliation relationship with Indigenous governments.

Canada has provided past funding, for example, to support Indigenous Nations creating Indigenous Protected and Conserved Areas. It has also funded a pilot program for the Indigenous Guardians who steward the land. In the U.S., that new spirit of reconciliation is perhaps best exemplified by the appointment and Congressional approval of the first Indigenous Cabinet Secretary, Deb Haaland, as Secretary of Interior.

The work by Indigenous governments to protect and steward their traditional lands needs to be considered an important nature-based climate change solution. It is also one of the most hopeful solutions to the global biodiversity crisis. Indigenous lands across the Boreal Forest region of Canada and Alaska hold massive amounts of carbon in storage and provide nesting grounds for billions of birds as well as habitat for countless other animals and plants.

The opportunity to express recognition of these facts by both the U.S. and Canada and a shared vision for ensuring the future of places like the Boreal Forest region should be a priority at the upcoming Leaders Summit on Climate. But more than that, the shared vision should include tangible pledges for increased funding for Indigenous Protected and Conserved Areas and Indigenous Guardians programs, for development of new Indigenous land management models, for increased funding in support of conservation efforts across the Americas, and for adherence to the principles described in the UN Declaration on the Rights of Indigenous Peoples. This includes the principle of Free, Prior, and Informed Consent.

The birds that have gifted us with their presence during our Covid isolation have also given us opportunity to recognize the true connectivity of all places and peoples. The decisions we make and the policies that we support make a difference far from our own little spot on this Earth. We hope that the Leaders Summit on Climate will showcase the ways that the governments of the U.S. and Canada can support new nature-based climate solutions that also exemplify opportunities for reconciliation and new models of interaction with Indigenous governments.