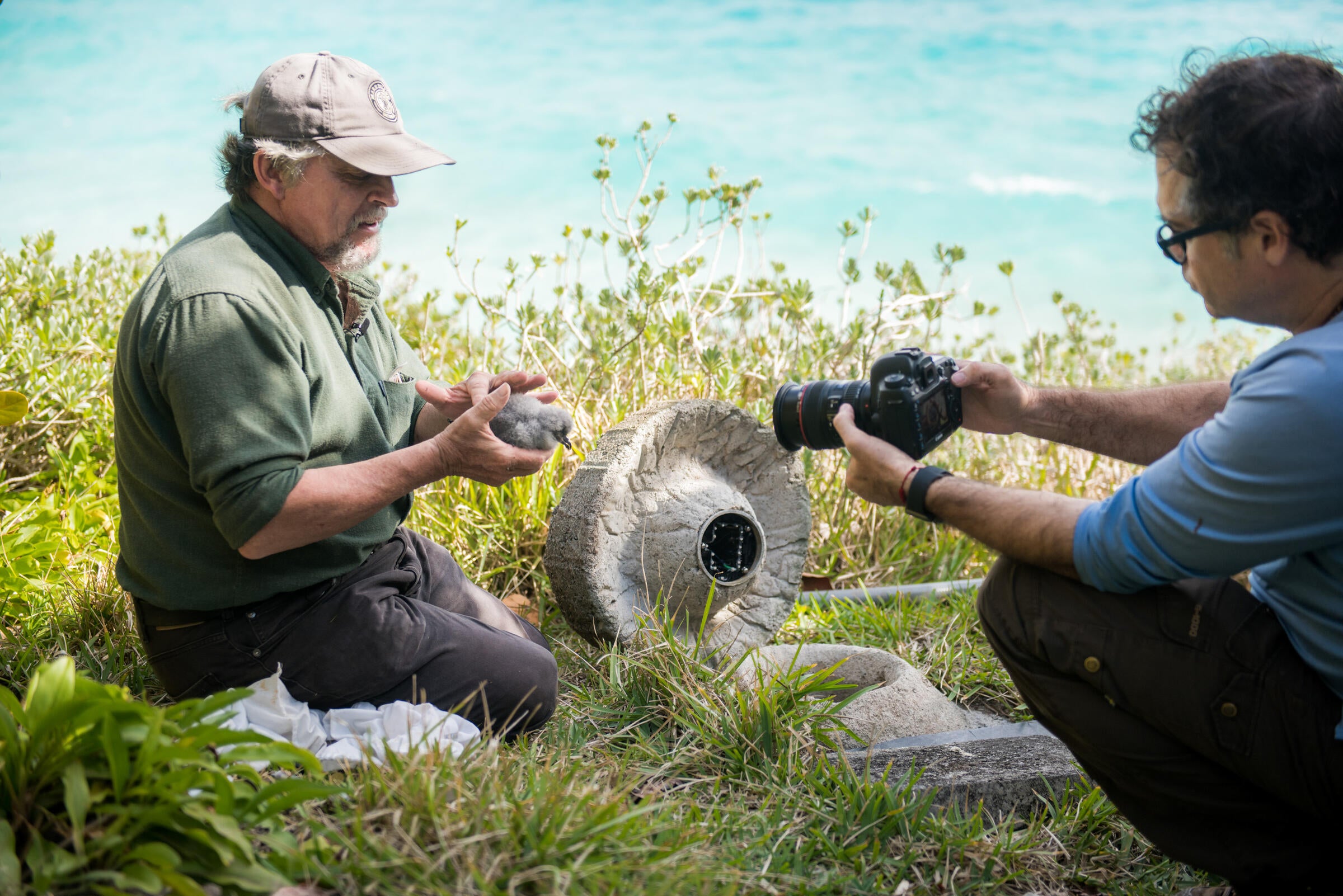 Jeremy Madeiros, principal scientist for terrestrial conservation in Bermuda, conducts a health check on a Cahow chick while Jean-Pierre Rouja, the photographer and environmentalist who founded CahowCam Project in 2013, films. Photo: Chris Burville

For the past decade, the CahowCam Project has entertained viewers while revealing new insights into the lives of the endangered Bermuda Petrel.

Just after midnight in March, 2017, an intruder enters a seaside burrow on Bermuda’s Nonsuch Island. He’s a young male Bermuda Petrel, or Cahow, a 15-inch-long seabird wearing slick gray-and-white feathers. He is also one of only 350 or so individuals left of his species in the world. As the bird waddles into the basketball-size nesting cavity, he’s excitedly greeted by a fluffy mass of down—a cheeping, five-day-old Cahow Chick waiting for its parents to return with a meal.

But the young male is not the chick’s parent; he is an invader looking to take over the nest. He suddenly grabs the chick’s neck with his hooked bill and starts biting. The next 18 minutes are tense, as the male alternates between scoping out the nest and assaulting the chick. Unsatisfied, he finally exits the chamber, leaving behind a shaken but otherwise intact nestling.

This encounter—caught on camera and livestreamed to thousands of online viewers—was the first time Cahow conservationists had ever observed such a behavior. At that point, researchers were well aware of the dangers that invasive rats, land crabs, and competing tropicbirds pose to young petrels. But this video footage documented an unknown threat to the endangered seabird: other Cahows.

The discovery is one of several made by The CahowCam Project, a set of livestreaming webcams currently in its 10th season of monitoring Cahow nesting burrows of Nonsuch Island, a 14-acre wildlife sanctuary in Bermuda. The project consists of three cameras: two tucked away in nesting cavities, and one stationed outside of the two burrows. Jean-Pierra Rouja, a photographer and environmentalist who founded the project in 2013, runs and maintains the livestreams. Last year, they collectively saw roughly 450,000 views from people around the world.

“The 24/7 monitoring of these feeds is so, so important,” Rouja says, noting the impact a global audience plays in helping to keep an eye on the Cahows. “Invariably, just because of the time zones, where our followers are from, there’s always somebody watching.”

The CahowCam Project's feeds typically goes live to the public sometime during winter, once the birds have occupied their burrows, and runs through June, when the breeding season ends. In late February, the nesting pair currently occupying the burrow surveyed by CahowCam1 successfully hatched a single white egg—the clutch size for every Cahow. In early March, a second egg monitored by CahowCam2 also hatched. The survival of each and every nestling is critical toward saving one of the world’s rarest seabirds.

This Cahow chick was filmed on Feb 23, 2022. It hatched on Feb 19th, 2022—the earliest recorded hatching in the history of the colony. Video: Jean-Pierre Rouja

The main goal of the CahowCams and other bird webcams is to get as many people as possible interested in bird conservation, says Charles Eldermire, who oversees livestreams of owls, ospreys, birdfeeders, and more with the Cornell Lab of Ornithology’s Bird Cam Project, which partners with Rouja’s CahowCam Project. Making viewers understand the value of the Cahows and other at-risk species is key to helping them, he says. “People are going to be the thing, ultimately, that saves these birds.”

The idea for the CahowCams came to Rouja while he was filming the final years of a Cahow translocation project led by Jeremy Maideros, Bermuda’s senior terrestrial conservation officer. In 2004, Madeiros began translocating Cahow chicks from Bermuda’s outer islands to manmade burrows crafted on the higher grounds of Nonsuch Island, moving more than 100 chicks over five years. (Read the full story of Madeiros’s effort in the Winter 2022 issue of Audubon magazine.) But for all the decades of work done above ground to help Cahows, dating back to the 1950s, little was known about their subterranean lives.

“The underground burrow is in complete darkness and occupied for six months straight,” Rouja says. “We had no idea of what was happening down there.” 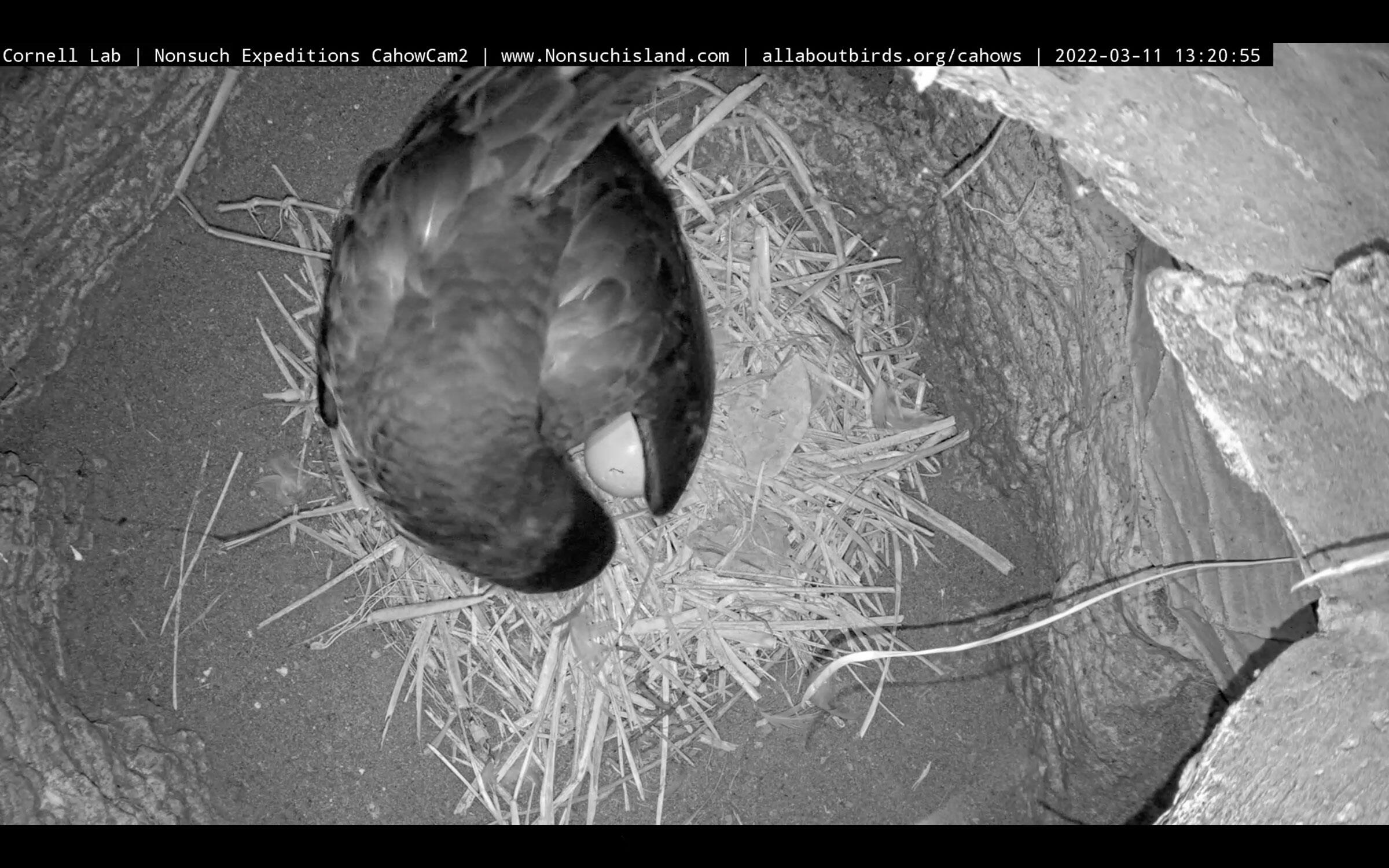 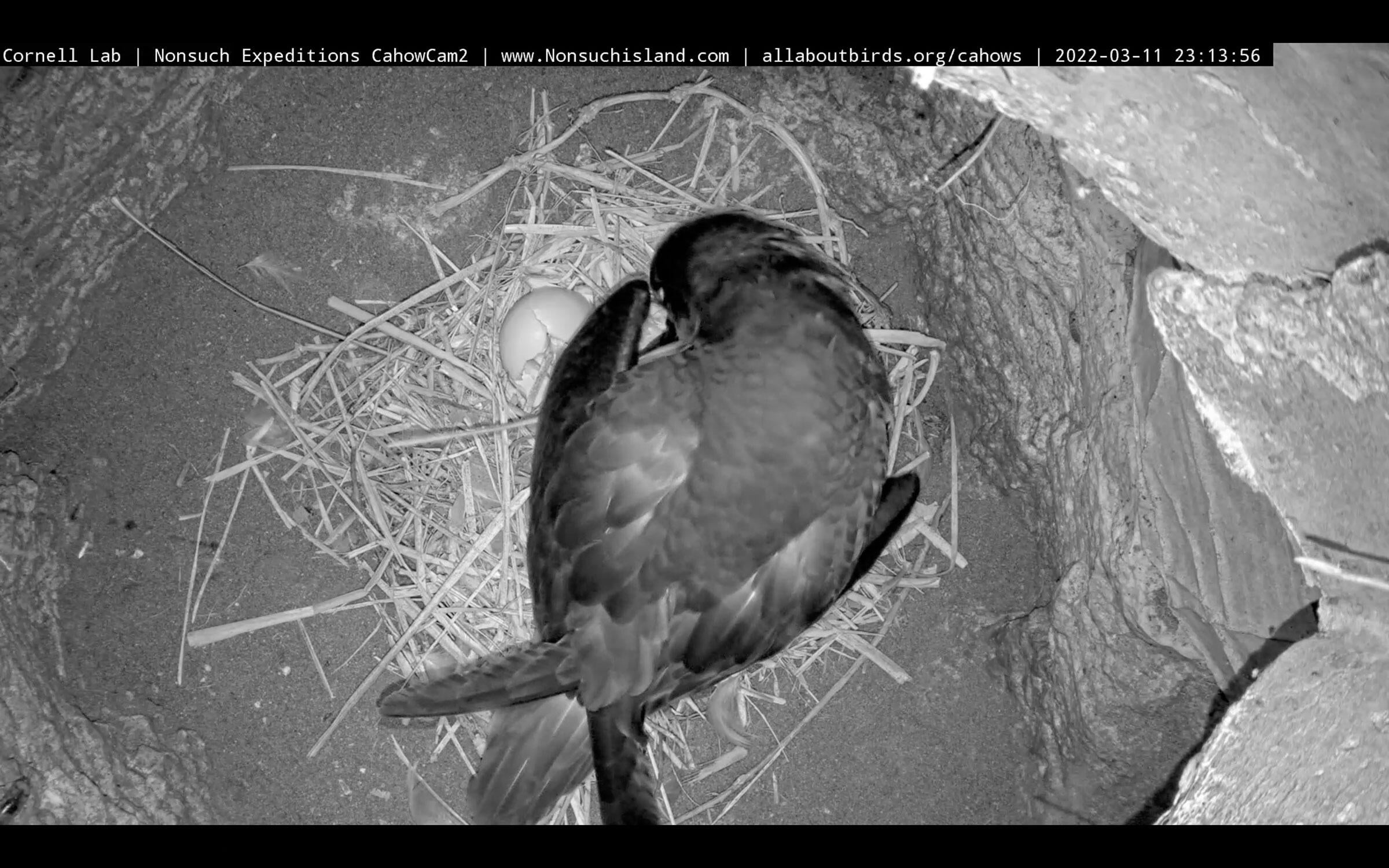 The first glimpse of the chick as it breaks through the egg shell. Video still: Nonsuch Expeditions/Cornell Lab Bird Cams 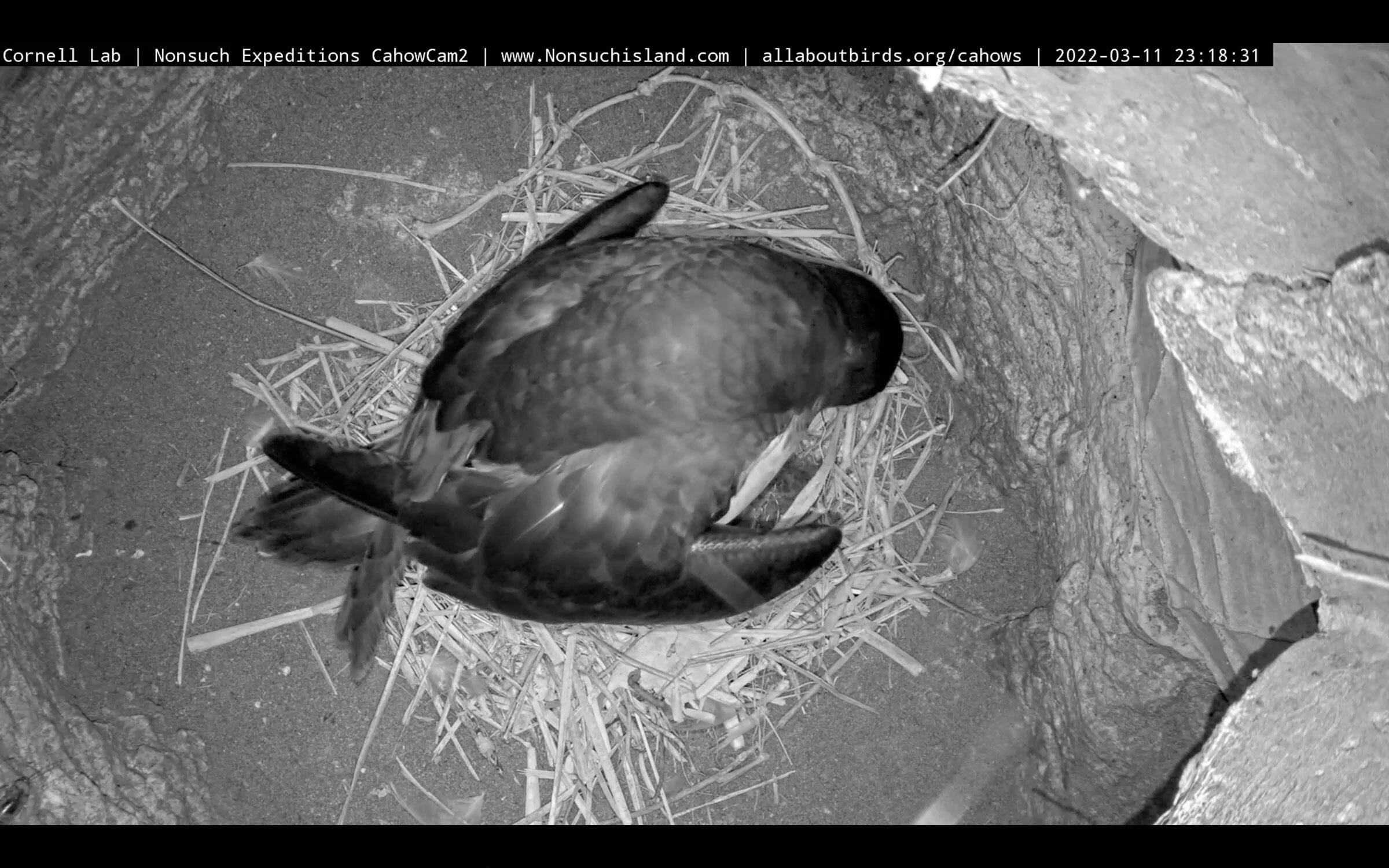 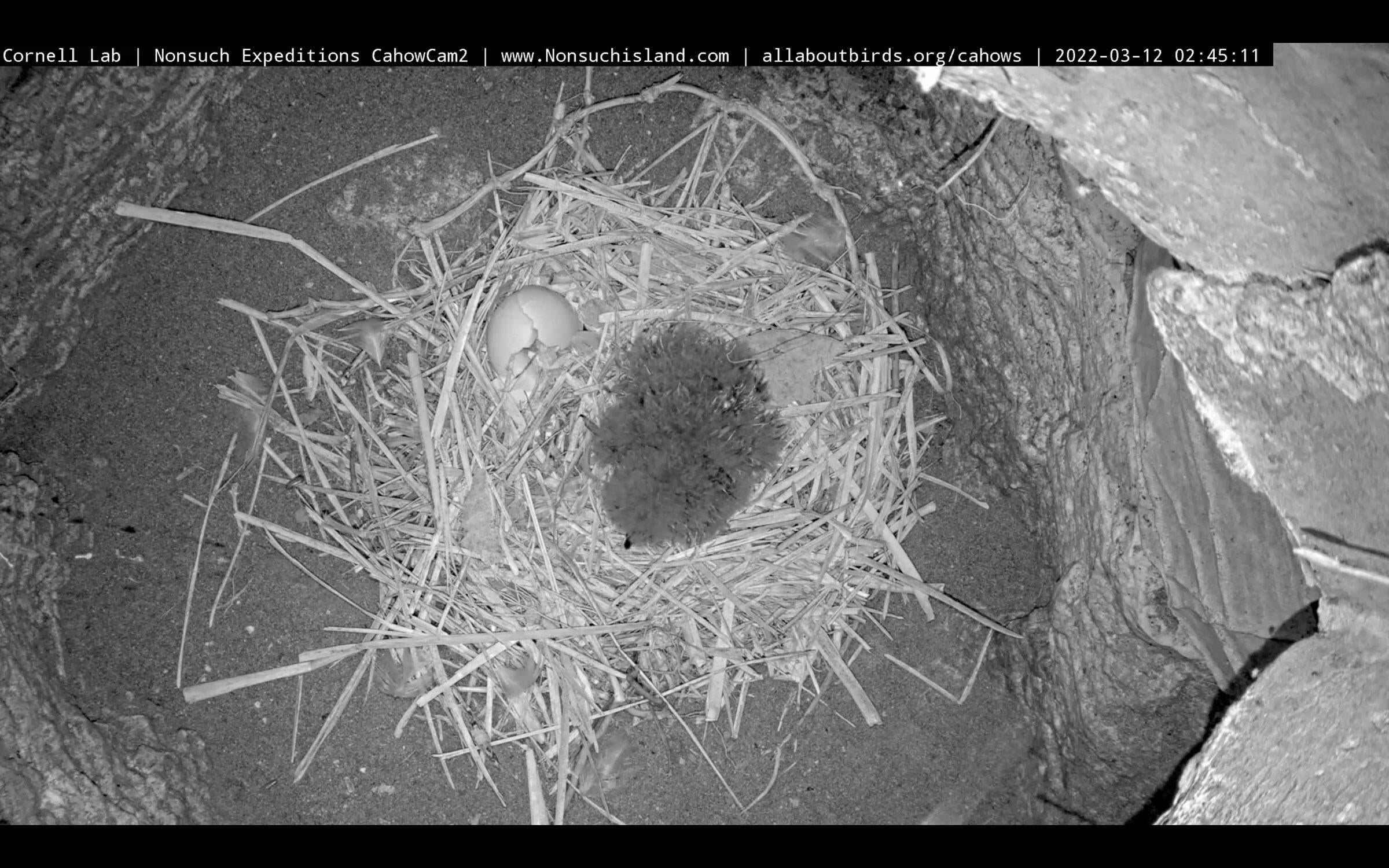 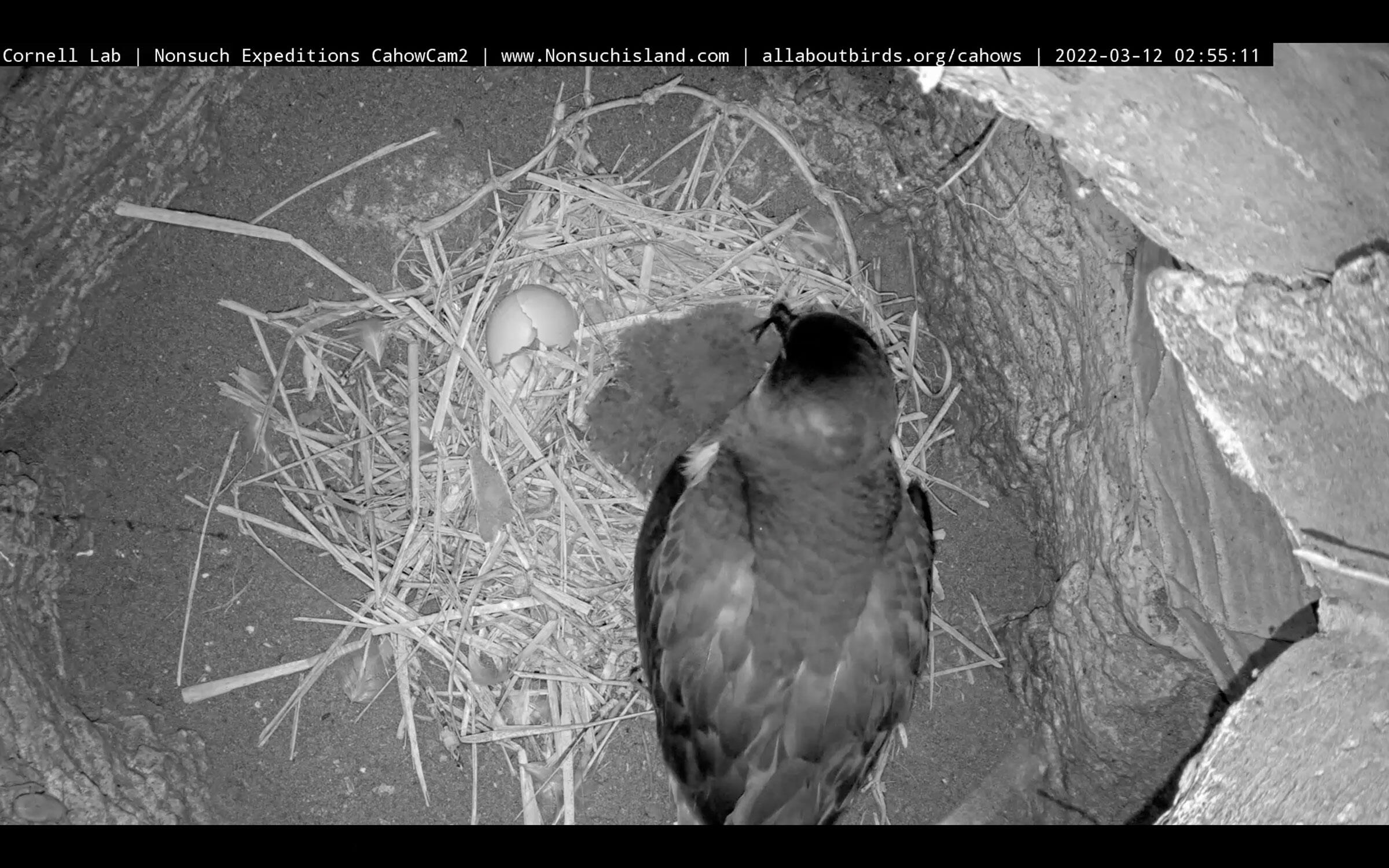 On March 12, the chick has one of its first meals. Video still: Nonsuch Expeditions/Cornell Lab Bird Cams

Observing any Cahow activity is complicated by their relationship with light: They don't like it. Living most of their non-nesting lives on the wing at sea, the birds don't approach land in daylight and even shy away during the brightness of a full moon, an adaptation that helps deter predation by raptors including owls, Rouja says. Their nests are also pitch black: Madieros’s artificial burrows, which mimic a Cahow’s natural home, are each made of concrete and consist of a six-foot-long tunnel with a 90-degree bend to keep out sunlight.

So when Rouja proposed the CahowCam Project in 2011, he modified his own cameras and built custom military-grade infrared lights that would be invisible to the Cahows. The cameras also needed to be solar-powered, waterproof, and energy efficient, allowing them to stay online when storms or other obstacles prevented him from reaching the island for maintenance. 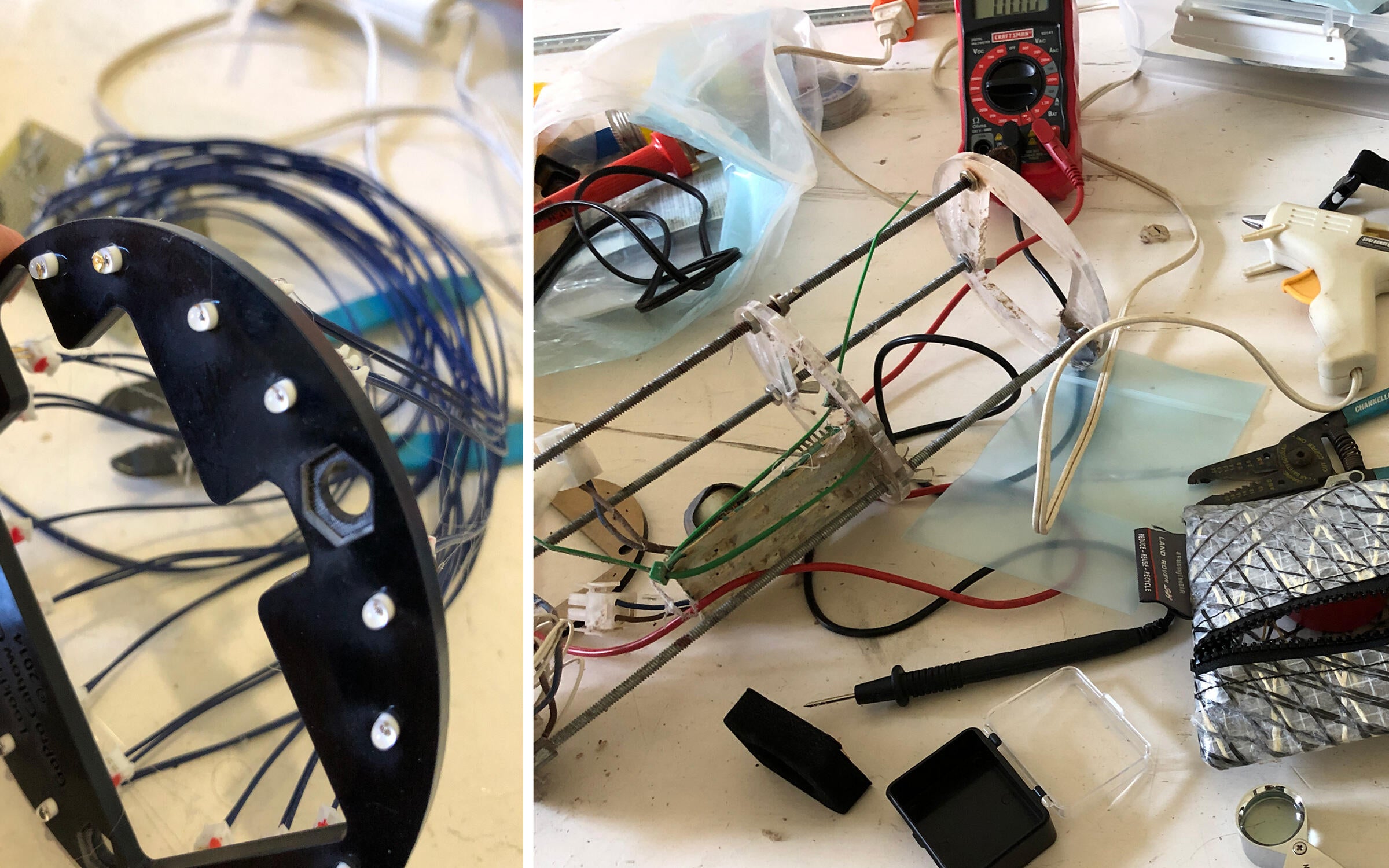 Left: A laser-cut camera faceplate with embedded micro infrared LEDs to light up the inside of the burrow. Right: Tools and supplies used by Jean-Pierre Rouja out on Nonsuch when replacing any individual LEDs that burn out. Photos: Jean-Pierre Rouja 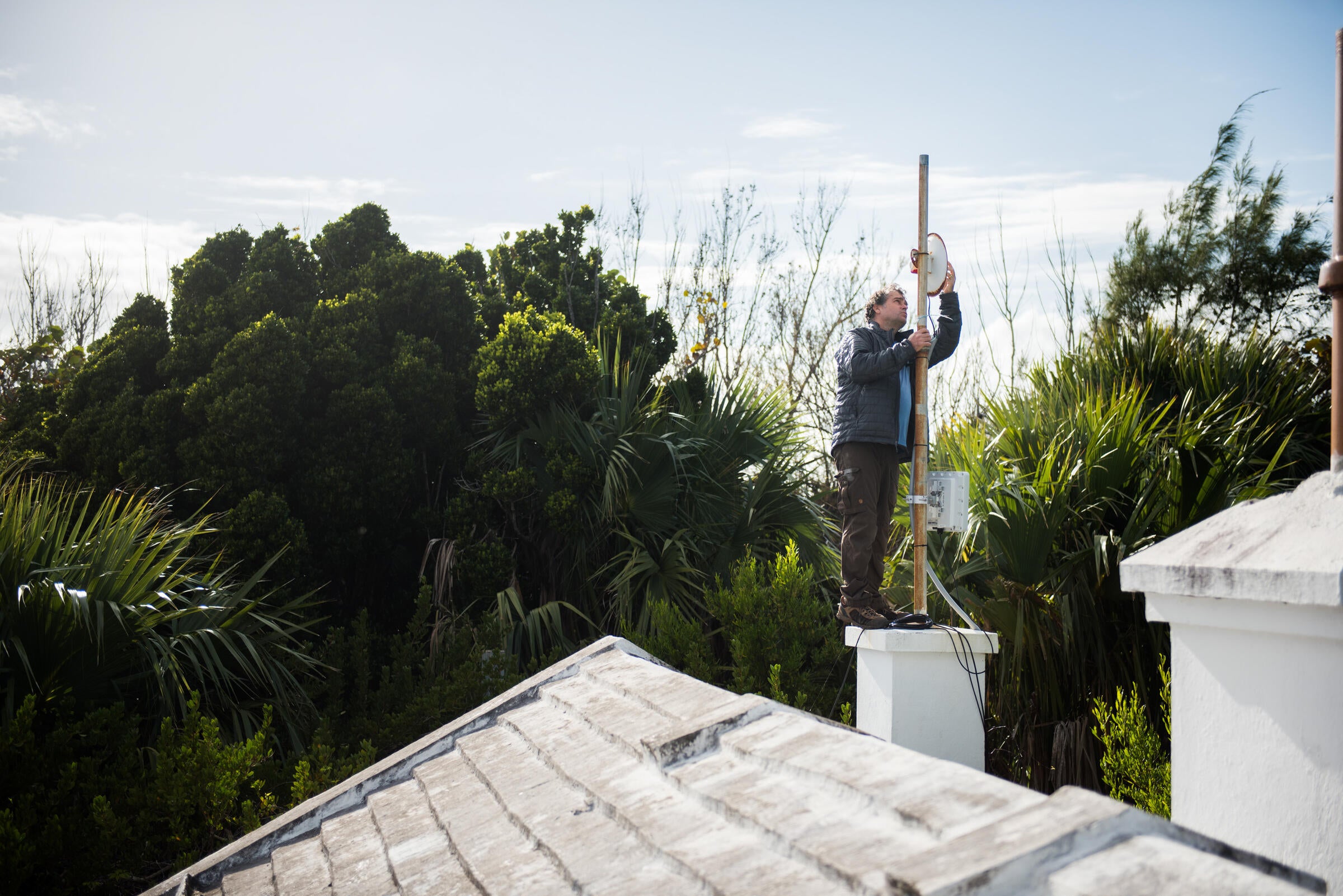 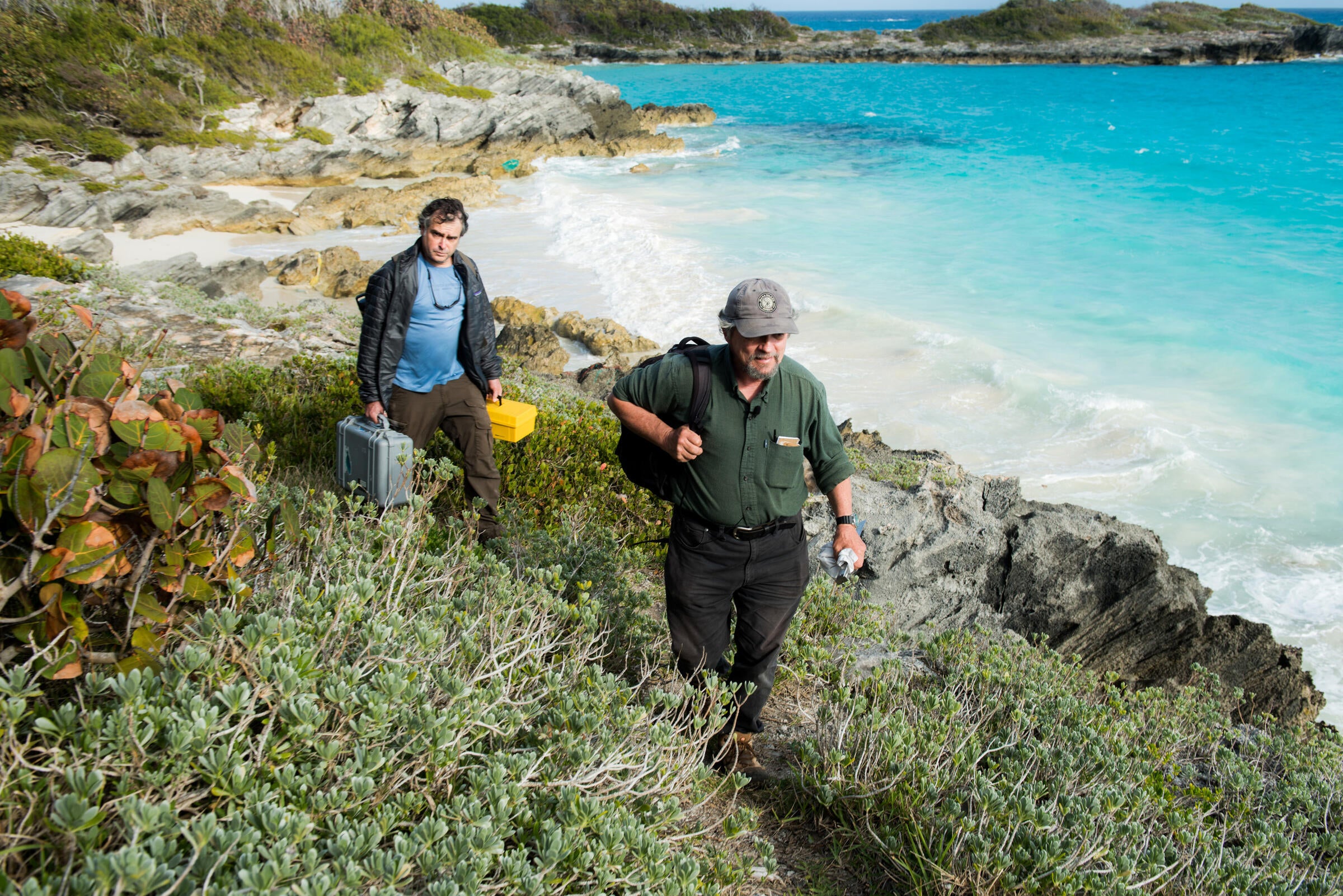 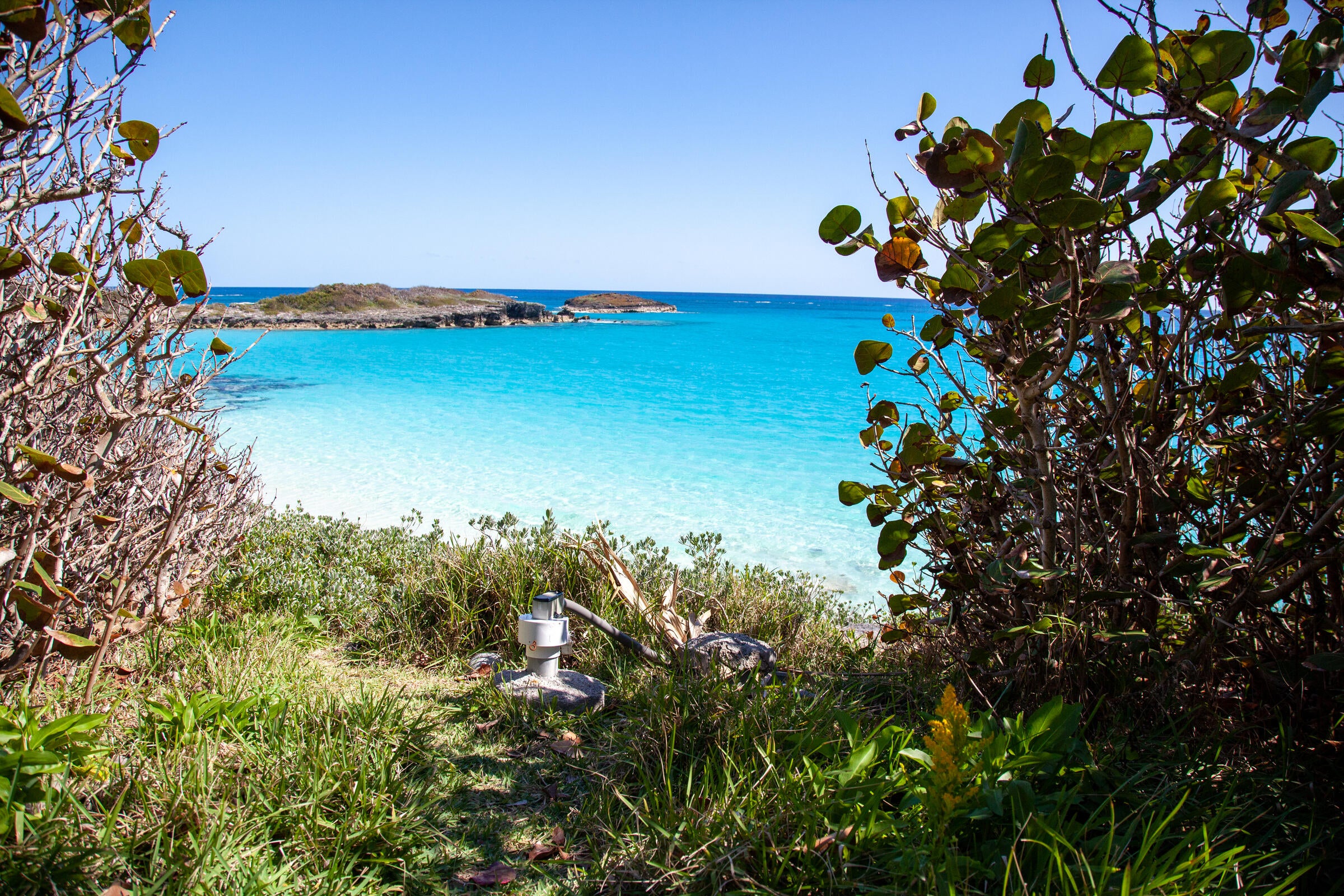 Nonsuch Translocation Colony A and the original CahowCam system, with infrared camera and 940mm custom-built infrared lights installed in a 4-inch PVC pipe embedded in the concrete lid of burrow 831. This design allows for the cameras to be moved from one nest to another without disturbing the occupants and has held up through multiple years and several hurricanes. Photo: Jean-Pierre Rouja 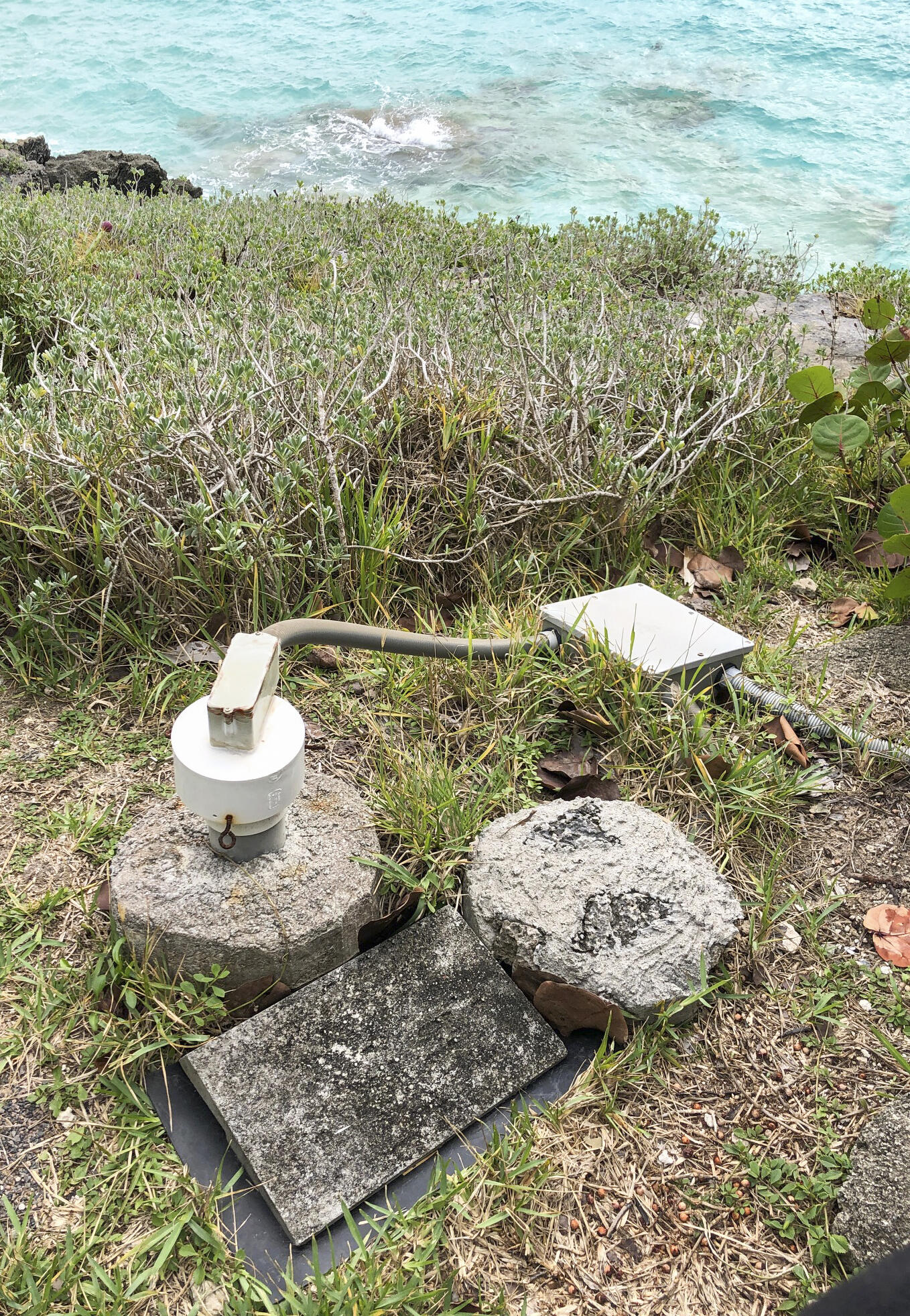 CahowCam 1 set up: Top left is the concrete burrow lid with lighting in a PVC pipe, and at the bottom is the rectangular concrete slab covering the hole where the camera is buried underground. The pipes lead back to a junction box for the solar power and internet access points. Photo: Jean-Pierre Rouja 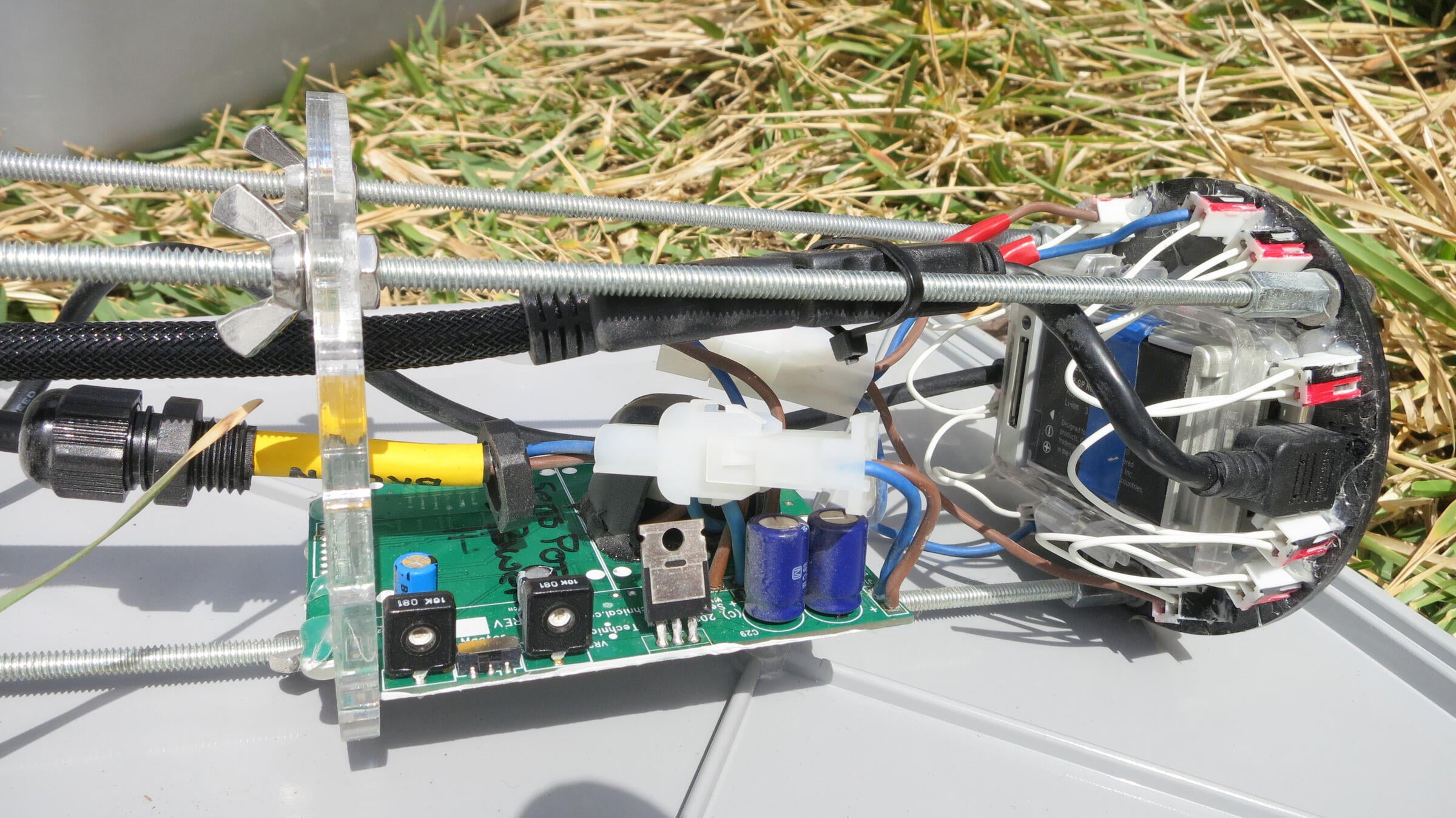 CahowCam prototype version 2.0 as deployed in 2013, with camera surrounded by lights on the far right. Photo: Jean-Pierre Rouja 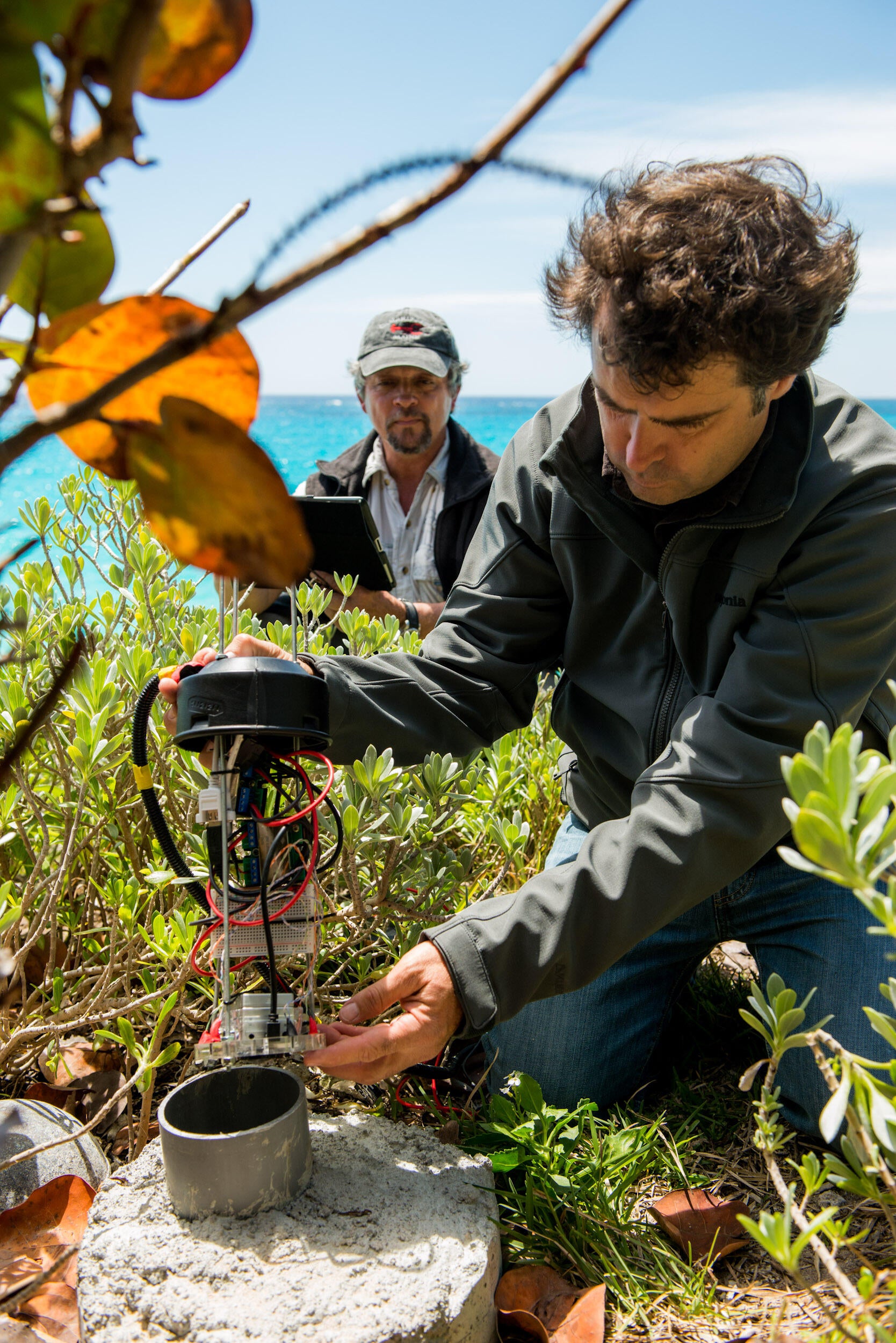 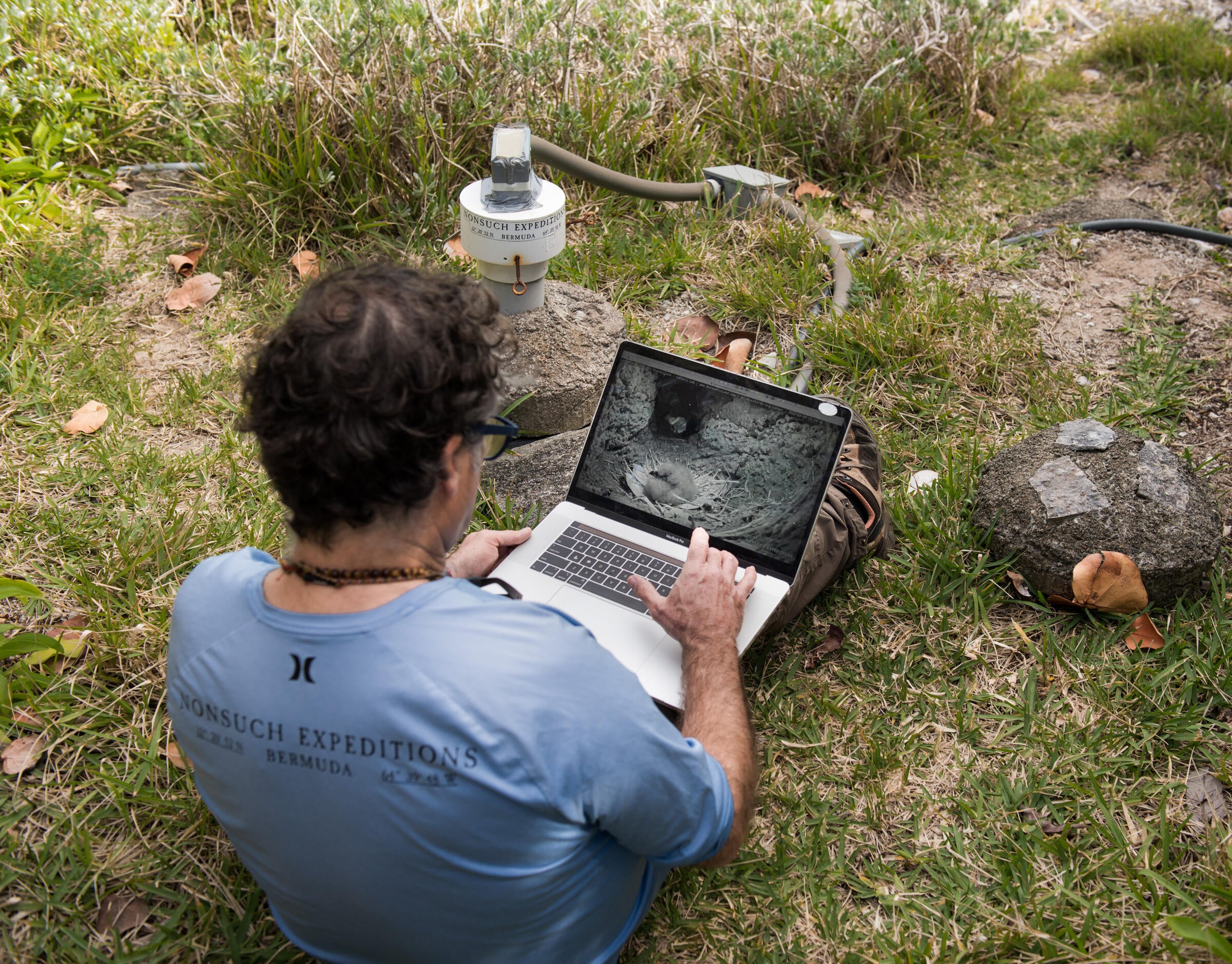 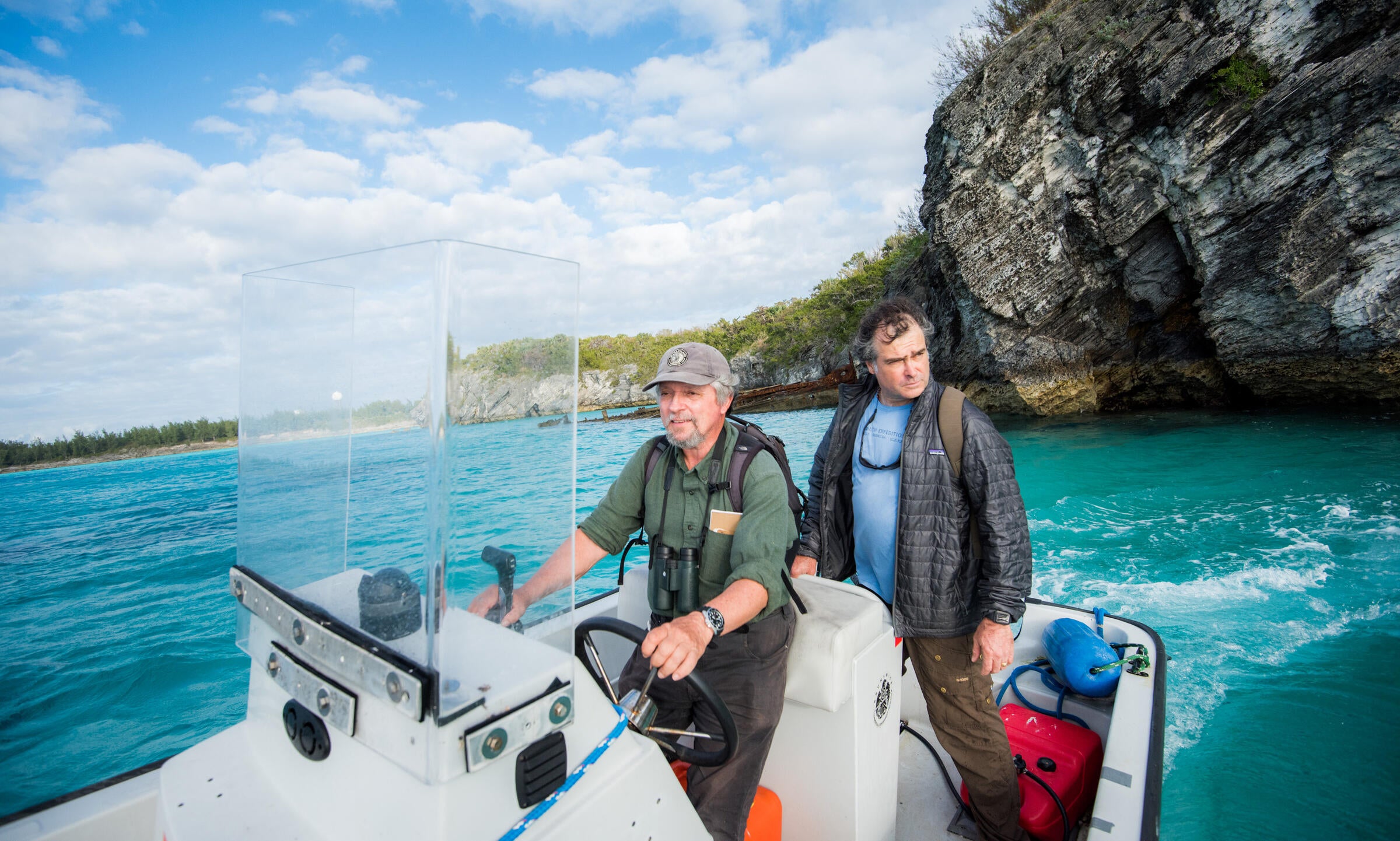 Two years later, the CahowCam Project officially launched. Initially, the cameras served only as scientific tools; when Madeiros visited the island to check on the birds, he would use the WiFi on his iPad to connect to each camera and survey the nests. But Rouja had grander ambitions—he wanted to broadcast the nesting birds online. The following year, in 2014, the installation of a larger solar array and wireless internet would allow the CahowCam Project to start livestreaming to viewers around the world. And in 2017, a partnership with the Cornell Lab of Ornithology brought the stream to even more homes. During the first year of working with Cornell,  CahowCams garnered 600,000 views with a total of 8.5 million minutes of video watched.

This constant vigilance has led to some important discoveries and observations over the years.

This constant vigilance has led to some important discoveries and observations over the years. For instance, conservationists rearing translocated or rescued young have benefited from watching how Cahows preen over-excited chicks to calm them before feeding, a ritual that can take up to 15 minutes. And a few years ago, CahowCam 3, which is angled toward the burrow entrances, captured a fascinating fledgling behavior. When young Cahows are around three months old, they leave the nest and head out to sea, where they’ll spend the next 3 to 5 years before returning to breed and raise their own chicks. Apparently, as captured by cam footage, chicks emerge from their burrows during their final few nights to exercise their wings—flight practice, essentially. Rouja believes this is how young birds test out different maneuvers they will use out over the opean ocean.

“It's not like their parents teach them this,” he says. “They're on their own, and they instinctively know to teach themselves how to do something before they do it.”