Save birds and habitats with a donation to Audubon. 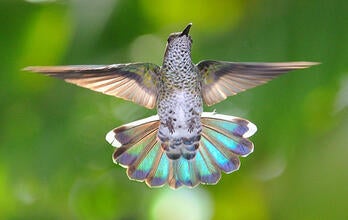 It is with great sadness that we report the passing of naturalist, citizen-science champion, and all-around birding great Chandler ‘Chan’ Robbins. He was 98. For more than 70 years, Robbins helped us understand birds and the natural world they inhabit while inspiring generations of scientists, citizen-scientists, and birders alike. He was awarded the Audubon Medal in 2000 for his groundbreaking work in bird conservation, and people who follow current bird news may recognize Robbins as the man who banded Wisdom, still raising young albatrosses and the oldest known living wild bird, back in 1956.​ Below are a few statements from Audubon staff on his impressive legacy.

Chan was the heart and soul of the Christmas Bird Count. As a scientist, he understood the importance of gathering data over time and his passion for birds was contagious. —David Yarnold, President and CEO, Audubon

Chan Robbins was a generational talent, with remarkable, influential and wide-ranging contributions to birding, conservation, and science. Co-author of my first field guide—the Golden Guide, founder of the USGS Breeding Bird Survey, bander of the oldest known bird, Wisdom, the Laysan Albatross, longtime CBC participant and enthusiast. All this, yet such a humble man, whose love of his family and birds always shined bright. —Gary Langham, VP and Chief Scientist, Audubon

The light that guides birders, ornithologists, and conservation scientists flickered yesterday with the passing of Chandler S. “Chan” Robbins.  When his “A Guide to Field Identification: Birds of North America” was published in 1965 it was a visionary book; a complete guide to birds of North America that also included range maps on the same page as the illustrations.  In that same decade Chan started the Breeding Bird Survey, now one of the two most important sources of data about birds in the Americas.  He was also instrumental in the other key avian database—the Christmas Bird Count, having been involved since 1934 (the year the originator of the CBC, Frank Chapman, retired) until this past season.  It hugely bothered Chan that he was unable to participate this year for the first time since then.  Yet through his long and storied life he remained a wonderful, humble, and welcoming figure, loved by all whose lives he touched.  He lives on in all of us. —Geoff LeBaron, Director of the Christmas Bird Count, Audubon

For those unfamiliar with Robbins’s work, we’ve reproduced the following article about him by Jeff Hull that first appeared in the November-December 2014 edition of Audubon.

Chan Robbins belongs to another era. Not the Birth of Environmentalism 1960s, when he was involved in groundbreaking studies proving the effects of DDT on birds. Not even the Public Works 1940s, when he came to Maryland’s newly established Patuxent Research Refuge, where he has worked for seven decades. No, Robbins belongs to the era of the great naturalists—the Audubons and Petersons and Grinnells—to a time when our nation’s woods, fields, streams, and skies teemed with unexamined wildlife.

Robbins’s mind, now 96 years old and stuffed with more information about birds and trees and plants and weather patterns and population dynamics than most people could ever learn, is still nimble and curious in the way of all naturalists. And the man who wrote the Golden Guide, the man who created the annual Breeding Bird Survey a half-century ago, is now a living legend who continues to study birds. “He’s been a hero of mine since he first put out his pioneering field guide in the mid-1960s,” says John Fitzpatrick, director of the Cornell Lab of Ornithology. “As my own career developed, I recognized more explicitly what a hero he was, not just to me but to the field of ornithology and bird conservation.”

Robbins stands in the cool shifting shade beneath massive oaks, beeches, and hickories next to a bridge over the Patuxent River, listening intently and looking very much at home—even if he has to lean on an aluminum walker. His spiky shock of white hair might have made Sting proud during the Police years, but Robbins is a kind and gentler presence; one colleague described his voice as “Winnie the Pooh’s.”

Robbins has lost the higher ranges of his hearing, something that happens to all birders fortunate enough to live so long. He is testing out new hearing aids, but they all amplify traffic noise. “I don’t want to hear people as much as I want to hear birds,” he says.

Robbins has accomplished great things in research and conservation around the globe. He pioneered ways to measure the effects of habitat fragmentation on bird populations in North and Central America. On the Pacific island of Midway, he tagged a Laysan Albatross in 1956 that he recaptured in 2002; it remains the oldest known living bird. He coauthored one of the first truly modern field guides, Birds of North America: A Guide to Field Identification—referred to by fans as the Golden Guide, for the name of the guidebook series—which has sold more than six million copies.

It is at Patuxent that Robbins has grounded his life’s work. Patuxent is the nation’s only refuge designated specifically for wildlife research. Founded in 1936, it has expanded from its original 2,656 acres to encompass 12,840 acres of upland forest, riparian area, and oak-pine savannah. The property has been divvied into 100-meter-square plots, each designated by small concrete markers. For more than 70 years Robbins patrolled those 100-meter blocks, learning the things that time had to tell him about this patch of woods—and thinking about what those things might mean on a broader scale. In the 1950s Robbins helped design and carry out DDT studies here that were integral to our understanding of how the pesticide affected birds. He watched others conduct aerial spraying of control plots with the deadly chemical and observed what happened to the birds that fed on earthworms there. “We ended that study in the 1950s,” Robbins says, “but DDT derivatives last in the soil forever. The worms here are still toxic to birds.” Recent research shows that DDT’s toxic legacy persists across the globe.

Likewise, Robbins has documented how Northern Bobwhites, a once-common bird at Patuxent, have almost disappeared from the area. Red-eyed Vireos used to be the most numerous breeding bird here; they’ve declined precipitously, and nonnative House Finches have moved in. And if Robbins says a bird species is not as abundant as it used to be, he’s not your grandfather sitting on a porch rocker remembering the old days. Robbins has the numbers.

Chandler Seymour Robbins grew up in Belmont, a Boston suburb, in a time and place where everything to the east of him was “houses and Boston” and everything to the west was woods and fields. He roamed those woods using 3X opera glasses to watch birds and other animals—his de facto biology training—and spent his summers chasing shorebirds on the beach at Gloucester.

Robbins graduated from Harvard in 1940 with a physics degree, which he used to teach for a few years until, as an alternative to active duty in World War II, he joined the Civilian Public Service. He was transferred to Patuxent in 1943 to assist with bird banding projects. Two years later he officially began working for the U.S. Fish and Wildlife Service.

One day in the early 1950s, while sorting incoming mail, he read a letter from a woman noting that hundreds of robins had fallen dead on several college campuses after DDT was sprayed there. The letter writer wondered whether this was an isolated event. Robbins was already engaged in his DDT studies (they would later inform Rachel Carson’s Silent Spring), and he wondered how the pesticide and other factors were affecting bird populations nationally—and how he could quantify any changes.

His answer was the North American Breeding Bird Survey. Americans, Robbins hoped, would willingly devote part of a day to a systematic national bird count. He wanted to generate a picture of breeding bird populations on a continental scale. “I had to devise a system that would create coverage of a substantial area at the same time every year, when birds are most active but when the migrants had moved through.”

He designed several roadside counts to nail down the optimal day and length of the survey. After much field testing in various habitats across the continent, at various times of day and in different weather conditions, Robbins settled on what he felt were optimal timing and lengths for each survey. He worked out the kinks locally for a couple of years, then in 1966 launched the survey in states and Canadian provinces east of the Mississippi River. (It was later expanded to include all of the United States, Canada, and Mexico.) Observers covered 600, 24.5-mile routes that first year, stopping every half-mile to count—by eye or ear—as many birds as they could in a three-minute period. The survey has documented bird population dynamics nationally ever since, and today 2,000 observers across the continent collect data on more than 3,000 routes each year.

“Chan’s insights and instincts set the Breeding Bird Survey protocols into motion, well before people were talking about declines of North American birds,” says Cornell’s Fitzpatrick. “He was prescient. He was energetic. And he was courageous, frankly, to dream big and get that whole process in motion.”

The Breeding Bird Survey remains one of the world’s foremost tools for monitoring avian population trends. David Ziolkowski, program biologist for the survey, says it is recognized as the foundation of non-game land-bird conservation in the United States and Canada. The data have pointed to the decline of Northern Bobwhites and various other grassland birds as well as the resurgence of Bald Eagles and Wild Turkeys. The findings also hint at some impacts of climate change by revealing distinct northward shifts of such species as the Red-bellied Woodpecker, Northern Cardinal, and Crested Caracara.

All of this from a man with no formal training in biology.

“We hear this term ‘citizen science’ so much nowadays, but it’s a spectrum,” says Ziolkowski. “Science is the course of asking questions in a methodical way that lets you get to real answers about things. Chan took things citizens do every day—go birding—and collected that information in a scientific way. That will be his living legacy.”

Robbins no longer participates in the bird count he started—he has suffered too much hearing loss to ensure accuracy. Though technically retired, he retains the title scientist emeritus, and his daughter Jane drives him to his office at the refuge several days a week, where he sifts through old records, collating banding data. “I joke that now that Chan’s retired, he works 12-hour days instead of 14-hour days,” Ziolkowski says.

Robbins doesn’t maintain a life list so much as dream of birds he still wants to see. He’s off to Ecuador in February in search of a Harpy Eagle. And then there’s the Brewster’s Linnet. As a child, Robbins became fixated on a picture of the bird, a cross between a redpoll and a siskin. Only one sighting has ever been recorded. “William Brewster shot that bird a mile from my childhood house,” Robbins says. “Growing up, I always thought, ‘Only one has ever been seen? I've got to see another one.’ ” He may be nearing the century mark, but he isn't giving up: “I’m still looking.”