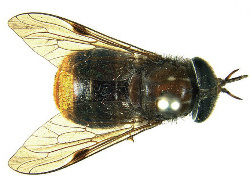 Although Beyonce came up short in the most recent People’s Choice Awards, she just received a different sort of recognition – an animal named after her. Scaptia beyonceae, a type of horsefly, was officially titled earlier today by Brian Lessard, a researcher from Commonwealth Scientific and Industrial Research Organization (CSIRO). The “Beyonce Fly,” as it’s being called, was found in Northern Queensland where it's treated as a pest. Perhaps its new name will make locals a little less likely to swat it?

The fly was collected in the same year that Beyonce was born (1981). Lessard  thought that it also shared another similarity with the famous R&B singer: "It was the unique, dense golden hairs on the fly's abdomen that led me to name this fly in honor of the performer Beyoncé,” said Lessard, in an article appearing in The Telegraph. The star certainly does sport a full head of honey hair...

Naming animals after famous musicians isn’t anything new. For example, the spider Pachygnatha zappa was named after Frank Zappa and Hyla stingi is a species of frog named after Sting. Guess Blue Ivy Carter has something to look forward to.