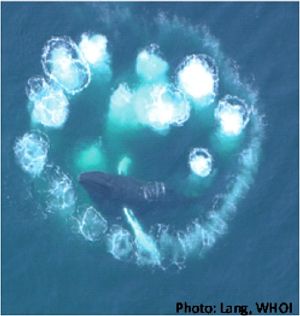 Hunting in the animal kingdom can be violent. An alligator uses its teeth and jaw muscles to break the bones of large victims. If that doesn’t work, it slaps its prey on the water to rip off bite-size pieces of flesh or even holds the animal under the water to drown it. Spiders spin inescapably sticky webs that snare unsuspecting insects. After a catch, the spider descends upon the doomed bug, binding it in cords and injecting it with deadly, flesh-dissolving poison. Humpback whales, though, employ a less gruesome tactic to capture their meals: They use bubbles.

Humpback whales use “bubble nets” to herd or concentrate fish into an area. That makes it easier for the whales to eat a whole course of fish in one nice mouthful. No chasing prey through the ocean for these whales. They commonly corral the fish by producing a spiral bubble net, which researchers had previously only seen from above the water. From the surface, the bubble nets look like closed circles or the figure ‘9,’ but below the surface, there’s a lot of skillful three-dimensional maneuvering going on, found a team of researchers from the National Oceanic and Atmospheric Administration. The researchers tracked humpback whales in the Gulf of Maine and recently published some beautiful visuals of the bubble feat in the journal Behaviour.

(Scientists tagged humpback whales to collect information about their movement, orientation, and depth. Here, the data is visualized. A close-up of a spiral action when the whale makes a bubble-net. From “Underwater components of humpback whale bubble-net feeding behaviour” by Wiley, et al published in Behaviour 148, 575-602.) 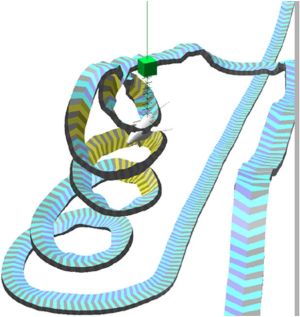 Humpback whales are baleen whales. They take in enormous mouthfuls of the surrounding ocean and then use their baleen to separate out food. Out goes the water, while any fish that happened to be swimming in that very mouthful are now on their way to the whale’s stomach. The fish are tiny and usually swim in schools, such as herring and American sand lance, so the whales get a bigger bang for the their buck when they round them up. Bubbles help them do that.

To find out just how the humpbacks actually make the bubble-nets, the researchers attached info-gathering tags to the whales’ backs. The tags collected movements, orientation, depth, and also acoustic data.

The scientists recorded a total of 300 bubble-net feeding events from nine separate whales and found that there are all different kinds of ways to hunt with bubbles. In some cases, the whales made spirals around the fish that got tighter and tighter, which compacted the fish at the top of the column. Other nets only corralled fish into a certain spot, rather than squeezing them into a bite-size morsel. The audio recordings revealed that the whales also make different types of bubbles – “streams” and “bursts” – that have different sounds. Continuous bubbles mean that a whale is making a bubble-stream “curtain,” while separate bursts of bubbles indicate “columns,” both of which help to contain the fish.

Swimming in tight spirals isn’t something all whales can do. Other types of baleen whales catch their prey by swimming fast in a straight line and then lunging at the end to grab the fish. After the carefully controlled turns and twists of the humpback whale – all while releasing a stream of positioned bubbles – other methods at catching prey seem so… inartistic.