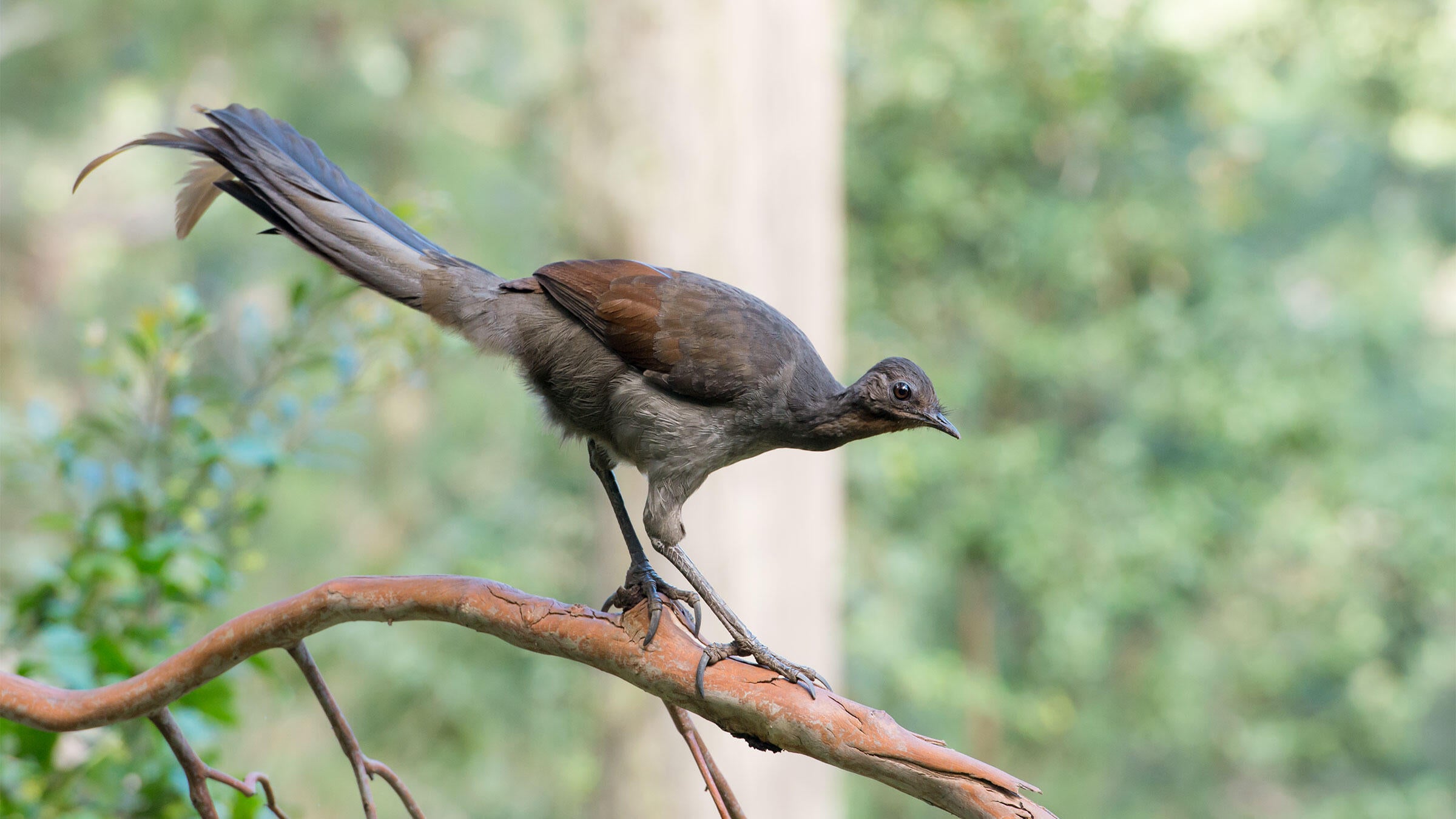 Lacking the dazzling display of the male, the Superb Lyrebird lady has many talents of her own. Photo: Justin Welbergen

Male Superb Lyrebirds are the Bruno Mars of the avian world—handsome, with ­­smooth moves and a love-song library that turns heads. As they perform on the forest floor, these talented Australians mix mimicked sounds with self-composed songs. Want to hear some kookaburra calls? No problem. What about a whistled original? Coming right up. While the pheasant-size fellas croon, they spread their tail feathers lyre-like, stepping and shaking under their own feathery canopies.

Females look on silently during this dramatic courtship display, judging whether the opposite sex is mate-worthy. Like juvenile lyrebirds, they have dark brown plumage and less elaborate tails. But their voices are astoundingly complex—a fact that scientists and birders have long missed, focusing instead on the attention-hogging males.

For a while, Anastasia Dalziell fell into that camp; her research started with the male Superb Lyrebird. As one of the largest songbirds on the planet, it offered a unique window into acoustic ecology and environmental soundscapes. In fact, the ornithologist from Australia's University of Wollongong calls it a “holy grail species” because of how it melds her love for music and biology. (That, and its ability to imitate other birds—and objects.) But while out in the field in 2014, Dalziell noticed the males had stopped singing earlier than expected. Soon after, she heard a string of distinct lyrebird calls, which she traced back to the females. The ladies, Dalziell notes, could be distinguished by their tails, which were bent from sitting on nests for hours.

To Dalziell, whose background is in music and biology, the sounds were striking. The female, she decided, deserved its own spotlight. Four years later, she and her collaborators are still uncovering the elements in the lady lyrebird’s vocalizations. Though research is still preliminary, their results suggest that females can mimic up to 20 alarm calls and 19 different avian species, and produce their own songs in specific situations. (Males, meanwhile, are known to ape 80 percent of their tunes with calls from up to 25 different species.) “We recorded females out foraging and at the nest, and we were blown away,” Dalziell says. “The songs were more lyrical than we expected.”

Some of the sounds they reproduce aren’t even vocal. Dalziell has heard, for example, females imitate the beating of bird wings, and what she thinks is the sound of tree branches rubbing together.

And it may be that unlike males, who are thought to use their talents mostly to woo mates, lady lyrebirds sing for their offspring’s wellbeing: While sitting on their single-egg clutch, Dalziell has recorded them imitating local predators like Grey Goshawks to keep other females from encroaching. The birds, she’s discovered, are quite territorial. When foraging away from the nest, they’re more apt to sing a distinct whistling tune. This, Dalziell speculates, may also help mark their range.

The lyrebird isn't the only avian songstress. More than 660 species have ladies that are known to harmonize, according to the Female Birdsong Project, a collaboration between ornithologists from the United States, Europe, and Australia. And there are thousands more that scientists have yet to decipher. The male-centric focus in past research could be chalked up to geographic bias: Birdsong research has largely taken place in North America and in northwestern Europe, where males more commonly belt their hearts out.

Katharina Riebel, assistant professor at Leiden University in the Netherlands and lead investigator of the project, believes that female birdsong is an ancestral trait that’s been lost in some species over time. The pattern seems to be particularly strong in birds residing in northern temperate zones, she says, though it’s not clear why. Lyrebirds, however, have retained the trait—possibly because they’ve gone through fewer evolutionary shakeups than other songbirds.

Riebel and Dalziell agree that much remains to be learned about imitation among birds. But for the time being, Dalziell has a more superb mystery on her hands. “Is the lyrebird also using mimicry in the same way as the [species it copies]?” she asks. Or is it simply adopting the sounds for its personal devices? Either way, it’s clear that the lady lyrebird sings its own song, proving the male isn’t the only voice worth hearing.