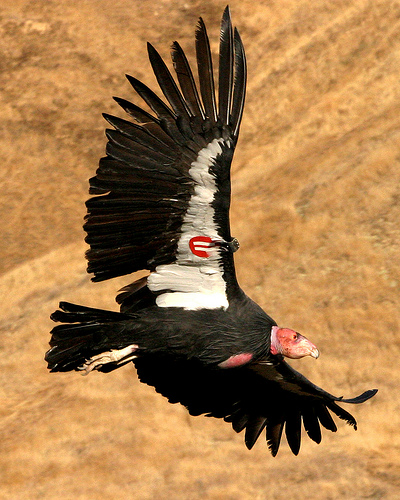 A California condor in flight. Photo by USFWS Pacific Southwest Region/ CC BY 2.0

Since December, seven California condors, the largest and most endangered land bird in North America, have died around the Grand Canyon, the Center for Biological Diversity reports. The culprit in three of the cases—and suspected in the other four deaths—is poisoning from ingesting lead ammunition. Condors are scavengers that feed on carcasses and gut piles of elk, deer, and other animals; when those creatures have been shot by hunters who use lead ammunition, the birds ingest metal fragments with their meal.

Any loss of a condor is significant because so few of these remarkable birds   they can weigh up to 25 pounds, have a wingspan of 9.5 feet, and soar at 50 miles per hour   exist today. According to the U.S. Fish and Wildlife Service’s March 2013 report, there are only 404 condors; of those, 173 are in captivity, while the remainder fly free in Arizona, Utah, California, and Baja, Mexico. The numbers are so low that the species is critically endangered, but it’s made a significant comeback since 1987, when all nine remaining birds were captured for captive breeding. From those few birds the species has slowly rebounded and is carefully monitored and researched today.

The primary threat to this iconic species’ recovery is lead poisoning. The Peregrine Fund, which leads condor conservation in Arizona, has taken blood samples of 61 of the condors in Arizona since the year 2000. Of those, 52 birds had lead in their systems, and 20 of them had potentially harmful levels of the heavy metal. Lead causes an agonizing death in condors, slowly shutting down their organs, Jennifer Fearing, the director of California’s Humane Society, recently reported in a news article. Chelation therapy removes the lead from condors’ systems, but it requires capturing the birds. The Fund has treated 34 condors in Arizona, nearly half of Arizona and Utah’s wild population of 77 birds. In California’s Pinnacles National Park, where 33 condors currently live, by the time the vultures reach the breeding age of seven years old, nearly all have received emergency, life-saving chelation treatment at least once.

Conservationists and scientists are pushing for lead-ammunition bans to remove the threat. “The continuous deaths of Grand Canyon condors from lead poisoning is preventable if we finally treat toxic lead ammunition as we did lead paint and leaded gasoline,” says Jeff Miller of the Center for Biological Diversity in a press release.

Unlike the federal ban in 1991 on lead-shot hunting of waterfowl, no national ban exists for upland bird hunting. California and Arizona, the states with the most condor numbers, are making progress on reducing lead ammunition.

California requires hunters in condor’s ranges in central and Southern California to use non-lead ammunition, such as copper, and California state legislature is currently considering a bill to ban lead ammunition throughout the state. Audubon California is co-sponsoring this legislation alongside the Humane Society of the United States and Defenders of Wildlife. Additionally, some groups, like the Institute for Wildlife Studies and its’ partners, provide ammunition demonstrations where hunters can practice lead and copper shooting with a range of calibers, for free.

Arizona, meanwhile, has a voluntary lead-reduction program and distributes free copper ammunition to hunters in the condor’s range. The Arizona Fish and Game Department reports that this program has lead to 80 to 90% participation within hunters since 2007, although lead exposure still occurs in Arizona condors, particularly during the fall hunting season.

A lead-ammunition ban would protect more than just condors, including bald and golden eagles and red-tailed hawks, according to the U.S. Geological Survey.

Last month, a group of scientists, doctors, and public heath experts released a page-long statement, citing the dangers of lead ammunition. “We, the undersigned, with scientific expertise in lead and environmental health, endorse the overwhelming scientific evidence on the toxic effects of lead on human and wildlife health,” states the group. “In light of this evidence, we support the reduction and eventual elimination of lead released to the environment through the discharge of lead-based ammunition, in order to protect human and environmental health.”

Additionally, the Center for Biological Diversity is leading a “Get the Lead Out” campaign to gather signatures for an anti-lead petition it will send to the EPA. The Center has filed several lawsuits in the past decade against the U.S. Fish and Wildlife Service, the Bureau of Land Management, and most recently, the Environmental Protection Agency, for refusing to address a previous petition to ban lead ammunition.

“Lead is dangerous to people and wildlife, even at very low levels, which is why it is critical that we take mandatory actions to remove it from ammunition and require less toxic alternatives,” says Sandy Bahr of the Sierra Club’s Grand Canyon Chapter in the same press release. “Requiring nonlead ammunition for hunting on public land would be an important step in limiting lead exposure for condors and other wildlife.”