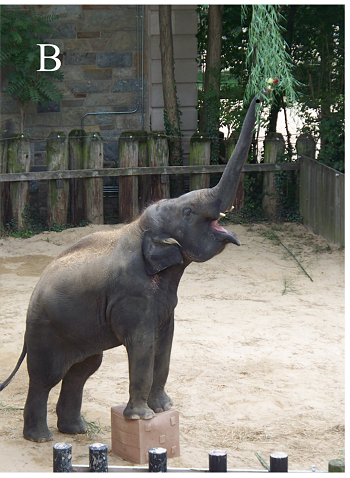 (A young male elephant standing on a cube and reaching for a branch baited with food. By Foeder/Reiss, CUNY)

Elephants are smart. No doubt about it. They use tools, have excellent memories and pass the “mirror test,” in which an animal can identify itself. Up until recently, however, they failed to show insight, a special ability of highly intelligent species. No longer. Researchers at a zoo in Washington, D.C. filmed an elephant using a cube in his enclosure as a stepping stool to grab fruit. Light bulb!

Scientists have observed primates and some birds demonstrating insight, but this is the first time documented for elephants. For animal studies, insight is defined as the ‘‘sudden production of new adaptive responses not arrived at by trial behavior.” Where there was once no solution, voilà, an animal uses its mental abilities to figure something out, without first testing a myriad of options.

The initial experiment failed. Scientists from the City University of New York hung fruit, an elephant snack, on branches outside of the elephant’s enclosure in the Smithsonian National Zoological Park in Washington, D.C. Because the fruit was too far away to grasp with a trunk, the scientists figured the elephants would use bamboo sticks conveniently placed nearby to make the reach. They tested three Asian elephants, two adult females and a young male.

The elephants used the sticks all right. But not to get at the fruit.

Instead, they used them to scratch their backs, hit the floor and walls, and pry at doors. Not a one tried to use the sticks to bring in the tantalizing snack. Was it because they didn’t have insight potential?

For round two, the scientists hung the boughs with fruit inside the cage, in case the bars were interfering with an “aha” moment. They also provided objects to stand on, such as a plastic cube and a basin, in addition to the sticks. The elephants had not been previously trained to move objects around in order to use them to reach objects. Even after 28 trials, the two females did not attempt to get the fruit using tools. Kandula, the seven-year-old male, though, surprised everyone in session number seven. “He left the food location and returned to the area one minute later, rolled the cube from its original placement to the suspended food’s location, stood on it with his front two feet and obtained the branch with his trunk,” wrote the paper’s authors, published in PLoS ONE.

(The elephant's first use of the cube as a tool to acquire food. By Foeder/Reiss, CUNY)

It was the “suddenness” of the event that implies insight, say the researchers. Kandula did not try out several options beforehand, he just went and got the cube and, bam, the fruit was his. In later trials, he applied his new knowledge to other objects, including a tire and some stackable slabs.

During the eighth session, the young elephant used the cube for activities besides fruit acquisition. According to the report, “At the session’s end, he also rolled the cube to the yard’s periphery and stood on it to reach for blossoms on an overhanging tree branch.”

Why didn’t the elephants use the sticks to get the fruit? An elephant’s trunk is not the same as a primate’s hand, write the paper’s authors. Yes, the elephants use their trunks when foraging for food, but it functions as a sensory organ as well as a clasping appendage. An elephant has an incredible sense of smell because of its trunk, which is also packed with nerve endings. Its job is to find, examine and then grab food. Holding a stick may disrupt the elephant’s ability to smell, which is a problem when food is the object. In other cases, elephants use sticks for skin care.

Of course, there is a debate about what “insight” actually is, and whether it’s something we humans can ever deduce from observing an animal. Plus, the elephant was in captivity, although it was not taught any such stool-as-tool technique. As things stand, little Kandula can add “insightful” to his list of characteristics.