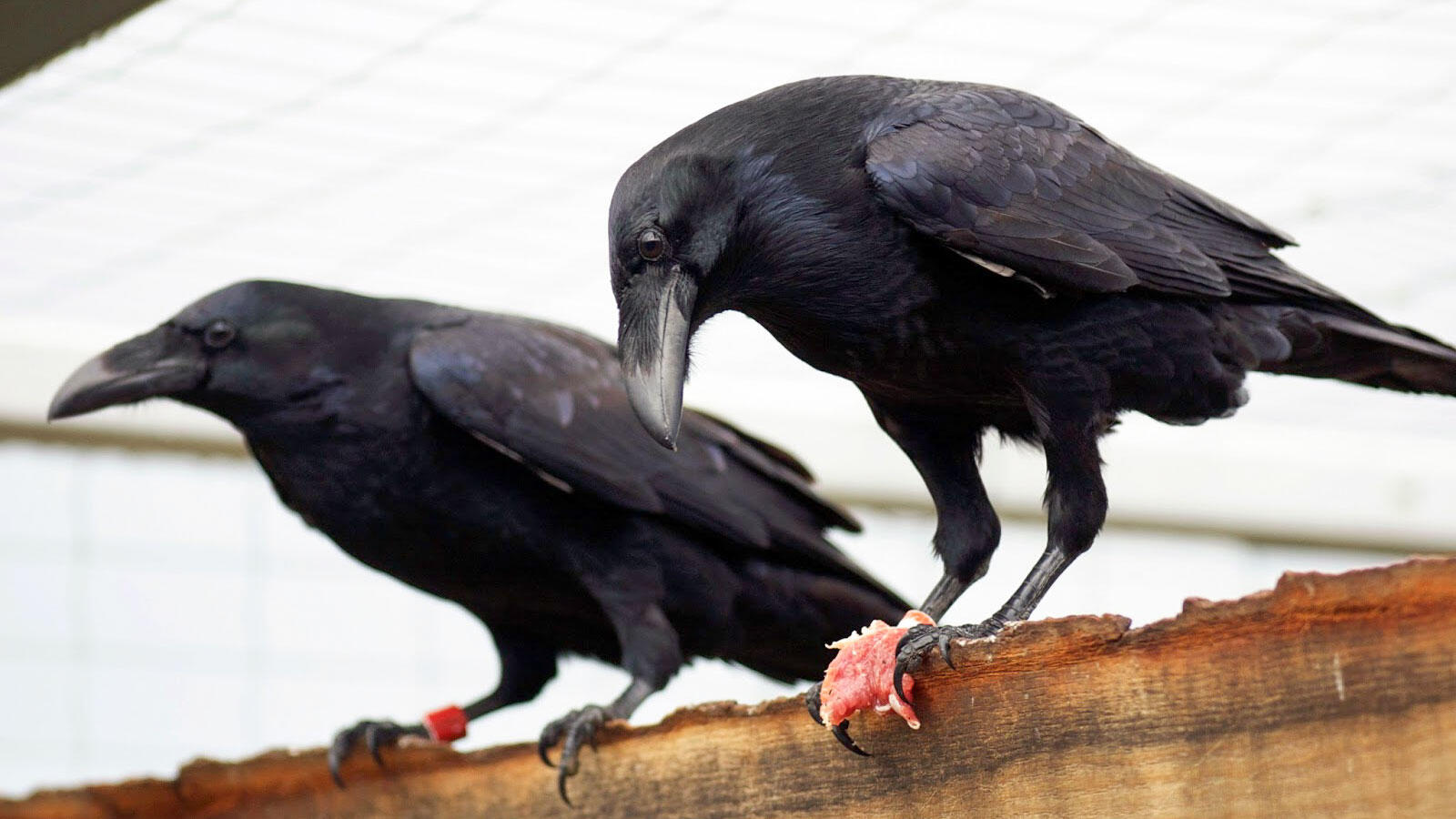 Common Ravens, like Juno and Lillen pictured here, are able to plan for the future, according to a new study. Photo: Mathias Osvath

Like Humans and Apes, Ravens Have the Foresight to Save Up for the Future

Even to a casual observer, it’s fairly obvious that corvids—a family of birds that includes crows, ravens, and jays—have more going on between their ears than most birds. They’re masters at curbing impulses, are cognizant of familiar faces, and meticulous when taking stock of their stash.

A new study, published today in Science, suggests that ravens are even smarter than suspected. The series of experiments shows that ravens are able to use past experiences to plan ahead for future events, and exhibit some self-control in the process—behaviors previously observed only in humans and apes.

“Evolutionarily, there is a vast separation between great apes and corvids,” says Can Kabadayi, an author of the study and graduate student in cognitive science at Sweden’s Lund University. The last time ravens and apes shared a common ancestor was 320 million years ago, he says, “yet ravens show similar skill sets and combine them, similarly to great apes.”

In a first set of experiments, similar to those conducted on great apes and humans, Kabadayi and Lund University’s Mathias Osvath looked for signs of corvid foresight by studying how Common Ravens use and store objects with no immediate use, but in the future might provide them with a reward. Five adult ravens were presented with a selection of objects: some could be bartered with a person for treats, and others could open a puzzle box with a treat hidden inside. The ravens quickly learned that they could trade certain tokens for treats, or use the correct tool—in this case a small stone—to release the treat from the box. They began saving tokens and stones, as though they planned to use them when the next opportunity to trade or open a box presented itself.

“Ravens like to hide and cache items, but not at random,” Kabadayi says. “Caching shows that they value items for a specific purpose. In this context, ravens cached boring stones and tokens because they saw value based on how they used the items before.”

Juno the raven uses a “tool” on a puzzle box to win big. Video: Can Kabadayi and Mathias Osvath

The researchers then tested whether the birds could remember how their ‘boring’ objects worked, first after 15 minutes, and again after 17 hours. During the waiting periods, the ravens continued to fixate on the tokens and tools they’d need for future treats, and ultimately, they excelled at the task. Even after the delays, they were better at planning future trades than orangutans, bonobos, and chimpanzees, and they matched apes at planning and using tools—despite the fact that they never need tools to gather food in the wild.

“These experiments nicely show that ravens flexibly tackle a certain problem outside of what they do naturally,” says Markus Böckle, a psychologist at the University of Cambridge who wrote an opinion piece for Science about the new research.

In a second set of tests, the researchers wanted to see if ravens could show some self-control. They presented the ravens with a number of objects on a tray, including bartering tokens, box-opening stones, miscellaneous items, and a treat that was subpar compared to the treat in the box. Instead of going for the instant gratification of the subpar treat, the ravens opted to use the tokens and tools to get the superior treat from the box—100 percent of the time when they could nibble on their prize immediately after opening the box, and about 70 percent of the time when they had to wait 15 minutes. The longer they had to wait, the less they valued a future reward.

Even though the ravens’ abilities matched those of apes—or even surpassed them—they actually evolved separately. “In the early 1990s, we discovered that birds share several neurobiological structures with mammals, showing the capability of complex cognition,” Böckle says. “We are sure that the common ancestor of ravens and great apes didn’t have complex cognitive behavior, so somewhere along the line, we believe birds evolved cognition independently.”

The discoveries by Kabadayi and his team open up new avenues for understanding how intelligence has developed in different branches of the evolutionary tree. And for many birders, this work confirms what we’ve long known: Raven smarts aren't too far off from our own.

Audubon is a non-profit, and stories like this are made possible by readers like you. To support our journalism, please make a donation today.