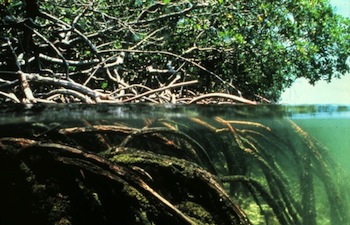 “An acre of red mangroves can annually shed more than three tons of leaves,” writes Christopher R. Cox in the current issue of Audubon. “That deadfall—the foundation of a complex food web—is quickly set upon by microorganisms like bacteria and fungi.” It’s those leaves that make salt-tolerant mangrove forests a nursery for inconceivable numbers of invertebrates, fish, birds, and more. But this detritus creates more than dense biodiversity, and boot-stealing mud; it contributes to mangrove forest’s astonishing ability to sequester carbon, an important consideration in an increasingly CO2-filled world.

A recent study published in Nature Geoscience outlines just how much carbon these intertidal forests hold. Around the Indo-Pacific, researchers found that mangrove forests stored 456 tons of carbon per acre, on average, or about three to four times more than many temperate and tropical rainforests. But though mangrove stands are thick, you’d never know their carbon-capturing powers from what’s visible. "Carbon in mangroves is really about the below-ground story," says Daniel Donato, of the U.S. Forest Service. Below the waterline, 1.5 to 10 feet of rich, anoxic earth accounts for 49 to 98 percent of the ecosystem’s carbon. Compared with the soils of other forests, that of mangroves traps five times as much.

To arrive at these figures, Donato’s team measured living and dead wood, as well as the carbon content and depth of the soil, at 25 sites around the Indo-Pacific, where mangroves are most abundant. But they’re disappearing at an alarming rate. In the last half-century, mangroves have declined by 30 to 50 percent worldwide due to development and, more recently, aquaculture projects like shrimp farms. When mangroves are cleared, that dense soil washes away, erasing a natural storm surge barrier and releasing carbon. Just how important to the climate change equation are these tangled canopies? According to this study, mangrove deforestation accounts for 10 percent of the carbon released from deforestation each year; and yet, mangroves amount to just 0.7 percent of tropical forest areas.

For more about mangroves ecosystems in Florida (and to see a beautiful photo gallery), click here.