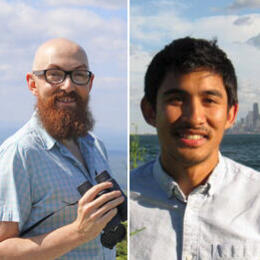 It’s more possible than ever before to gain an understanding of when and where wildlife roams. Advances in technology have led to increasingly lightweight and sophisticated tracking devices, and researchers are using these devices to record the movements of everything from butterflies to elephants. As our capacity to collect data on animal movement grows, so does the number of datasets. As the amount of movement data increases, it becomes important to consider how to best store, manage, and share these datasets.

To address this need, Movebank was launched in 2008. Hosted by the Max Planck Institute of Animal Behavior (then the Max Planck Institute of Ornithology), the project’s goal was to create a free platform that would help researchers effectively manage and publicly archive animal movement data. Through Movebank’s platform, researchers and wildlife biologists can upload data, share it with other researchers and, if they want, make the data publicly accessible. Today, more than a decade since it first went live, Movebank hosts more than 3.5 billion animal locations and 3.6 billion other animal-borne sensor measurements describing the movements and behavior of 1,178 animal taxa, included across nearly 7,000 studies owned by more than 3,300 biologists around the world. Needless to say, Movebank has become an integral part of bird migration research.

Sarah Davidson joined Movebank in 2011 and was excited for the chance to support animal tracking researchers from around the world through a shared data archive that would promote collaboration and applications to research, conservation, public engagement and policy.

Davidson, who serves as the data curator for Movebank, works to grow the data archive by ensuring that the online platform meets the needs of the researchers it is designed to serve. “Part of what makes Movebank such an effective go-to tool for sharing data is its flexibility,” explains Davidson. “It is designed to be compatible with all types of tracking data and can keep pace with rapidly changing technology.” Further, because Movebank aims to support projects from the very start of data collection, users can choose how accessible their data are, ranging from publicly accessible datasets to ones that are only visible to a select group of users. The presence of data for threatened and endangered species makes this sliding scale of accessibility particularly helpful.

Movebank does not only store massive amounts of tracking data, but it also connects researchers across the globe. One purpose of archiving these data in a central location is to make it easier for researchers to find and use animal movement data to answer questions that relate to topics ranging from climate change to infectious disease. The Movebank team facilitated those types of studies to promoting a culture of data sharing. “In the beginning you kind of had to draw people in and encourage researchers to store their data on Movebank. But more and more projects require sharing data across research groups or using Movebank to help with data collection and management from day one, and these use cases are often what drive people to our platform,” says Davidson.

In late 2020, the Movebank team worked with researchers from around the world to launch an Arctic Animal Movement Archive, which documents animal movement across the Arctic and Subarctic over the past 35 years. Through the resulting collaborative study, they demonstrate how behavior for many species has changed in response to climate shifts. As one example, they found that immature Golden Eagles arrive at their breeding grounds in the Arctic earlier following mild winters. Such insights will be key as we determine how to best protect vulnerable species in a warming climate.

As a Migratory Bird Initiative partner, Movebank provides a central place to store and access bird migration data. When researchers agree to share their data with Audubon’s Migratory Bird Initiative, they post their data to Movebank and make it accessible to the Migratory Bird Initiative mapping team. Maps produced by this team include a citation to the Movebank archive for any data that they present. If anyone wants to learn more about these datasets, they can use this citation to locate the original data and additional information on how, where, and when the data were collected, and contact the data owners with questions. If the researcher has made those data publicly available, they can download them directly, and if the use of the data is restricted, they can contact the researcher to ask for permission to use them.

While the Arctic Animal Movement Archive and the Migratory Bird Initiative demonstrate the potential for Movebank, Davidson and her team expect that these examples are only the beginning of what is possible. As Davidson explains, “What makes Movebank a powerful way to answer questions is that it’s not just a collection of data, it’s also a collection of people.”