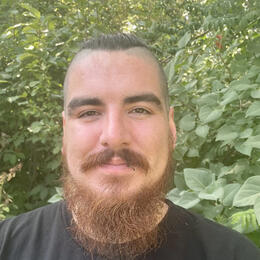 All over the news this summer were horror stories about travel. Luggage lost, long delays, people missing flights, and having to camp out on the floor of the airport. It did not seem to be the time to travel at all, but it was at the height of this awful travel season that I was assigned my first work trip. Admittedly, I was feeling some worry! While my trip wasn’t without a few hiccups, it was a very memorable one!

But before we get there, I wanted to share some background on myself. My name is Kohl Barrault, and I recently joined Audubon’s Boreal Conservation team as their Indigenous collaboration coordinator within Canada. In doing so, my main objective was to establish and maintain partnerships between Audubon and First Nations in Canada that fulfill their cultural responsibilities to the lands, waters, plants, and animals that sustain them.

I had some luck on my side when I was given the opportunity to work with and for Audubon. I’ve always had many different dreams growing up and being able to do something in the conservation field in some capacity that helps protect the land, water, animals, and plants along with working with Indigenous Nations was a dream come true.

Recently, I was invited to participate in a bird survey that was being undertaken in a community called Eastmain in Eeyou Istchee. Eeyou Istchee, in the northern part of Quebec, is governed by the Cree Nation Government and is comprised of 11 member Cree Nations along the coast of James Bay and within the inland region. This was my first time on a bird survey. Coincidently, I am a member of Eeyou Istchee, but this was the first time I went to Eastmain. I am from the Cree Nation of Waskaganish, which is about 319 km from Eastmain or 198 miles for any U.S. readers out there!

Everything seemed to be going smoothly when we touched down in the community before Eastmain, which was Waskaganish, with no problems. We then took to the skies again for the short flight to my destination. I noticed the airplane descended and what felt like the wheels touching on the runway but then we ascended back into the sky. I thought I heard the flight attendant say we needed to go to the next community (Wemindji) and then we would fly back to Eastmain, but this turned out not to be the case. Once we landed, I was informed that the plane would not be returning to Eastmain, so I had one of two choices.  I could either get off there and figure out a way to get back to Eastmain or fly back to Montreal where the next chance to get to Eastmain wasn’t for four more days. Anybody that has flown up north before knows how expensive flights and accommodations can be so losing that many days plus my plane ticket was not an option.

It turned out that on this flight was a woman who was also taking part in the bird survey in Eastmain.  Because of the situation, we quickly bonded and formed a team, which lasted for the whole of my stay. We made it to the hotel in this community after a little difficulty and planned to stay the night while trying to figure out how we would get to Eastmain in the morning.

The stay was short-lived. As I mentioned earlier, I am a member of Eeyou Istchee and had family members who were able to provide me and my new companion assistance in securing a ride back to Eastmain. The person who ran the hotel desk was kind enough to reimburse us for the cost of the rooms as we were there for only an hour or so. The ride to Eastmain was about four hours, and it was an enjoyable ride filled with relief as we were on our way to our destination. We arrived much later than originally expected but hey, what are you supposed to do—we made it, and that was all that matters in the end.

Unfortunately, it was quite rainy for the time I was up there, but the bird survey got lucky with some nice periods throughout. Most of the places that were to be surveyed needed to be reached by boat. This meant when the rain coupled with the strong winds made it unsafe to travel on the James Bay, the bird survey team needed to improvise. Luckily, there were some options for us to continue our work even with the unpredictable weather.

This being my first bird survey—and first birding experience in general—meant I was being taught a lot by my generous birding colleagues, which I was very thankful for. I’m sure I slowed down their own birding experience, but they never made me feel like I was a burden and provided me with some valuable knowledge and an experience I will never forget. On a day when we could not go out into the bay for a bird survey, we were able to secure some canoes with some local help for the bird survey team to use, which again is something I along with my colleagues appreciated while we were up there. We mapped out our route the day before and the next morning we were ready to go out.

We went out at low tide and a caution to anyone who ever goes up there, be prepared to sink into the clay and get a booter. Again, here is my good luck. When I sunk into the clay, I needed to hop into the canoe in my socks so I could pull my rubber boots out of the water. One came out filled to the top with water which meant it was a long day with a wet foot but on the other hand, I managed to pull my other boot out with no water inside, so again I could not be too mad. Half wet and half dry was not so bad.

Besides that, our planned route turned out to be inaccessible during the low tide, so we improvised again and found an island to land on and look for birds. We were lucky to find what we were looking for…. birds! By this point, the weather had turned and rain was coming down along with the tide starting to come in trying to take our canoes from the island bank. We hopped back in them and returned to the hotel to wait it out. The next day, which was my last day, we were able to finally go out safely on the James Bay and to some of the areas that were highlighted to be looked at.

The area we went to survey looked like an island when you came by boat but in reality, it was still along the coast and connected to the land. It was beautiful and amazing. We went for the birds but were pleasantly surprised as we reached the grassy lowland. It was filled with all different kinds of edible berries like wild strawberries and crowberries. At this point, I think all but one of us forgot we were there for the birds for a moment as we were all foraging for what seemed like an unlimited supply of ripe berries. After we had our fill, we continued on to the main goal and reason we were there. This spot was something to behold as once you walked past the berries it changed into an open and barren area. Seemed like the perfect place to look for some birds so we started to walk.

It felt as though the land was suspended on top of the water as it was soft walking on it with water pooling everywhere on top. This required weaving your way through, which we all seemed to do with ease. We did some birding and then made our way back to the boats. Can anyone guess what happened next? The weather turned and it started raining again. That did not deter us though. We managed to get to another area for a brief period before the rain and weather started picking up and we had to get back to Eastmain.

And for everyone wondering about the species of birds we encountered during our surveys, there were Ruddy Turnstone, Lapland Longspur, Sandhill Crane, Greater and Lesser Yellowlegs, Killdeer, Bald Eagles, and of course the Canada Goose! There were also many more different species; the species listed above are only a small sample of those we were able to view.

After this, I had my last supper with the survey team, which was not as ominous as it sounds as we shared some laughs and final words. The next day they drove me to the airport, and I said my goodbyes to them along with the person who originally invited me up into the beautiful community of Eastmain. I was then on my way back to Manitoba and back to continuing my journey with Audubon.

As you finished reading this story you might have noticed, I’ve not mentioned anybody by name. I did this with no disrespect intended but to preserve a little of the intimacy that I felt for my experience and the story I just shared. Those who shared in this journey with me will forever hold a place in my life as they shared their knowledge, time, stories, and some laughs with me allowing for a great birding adventure!