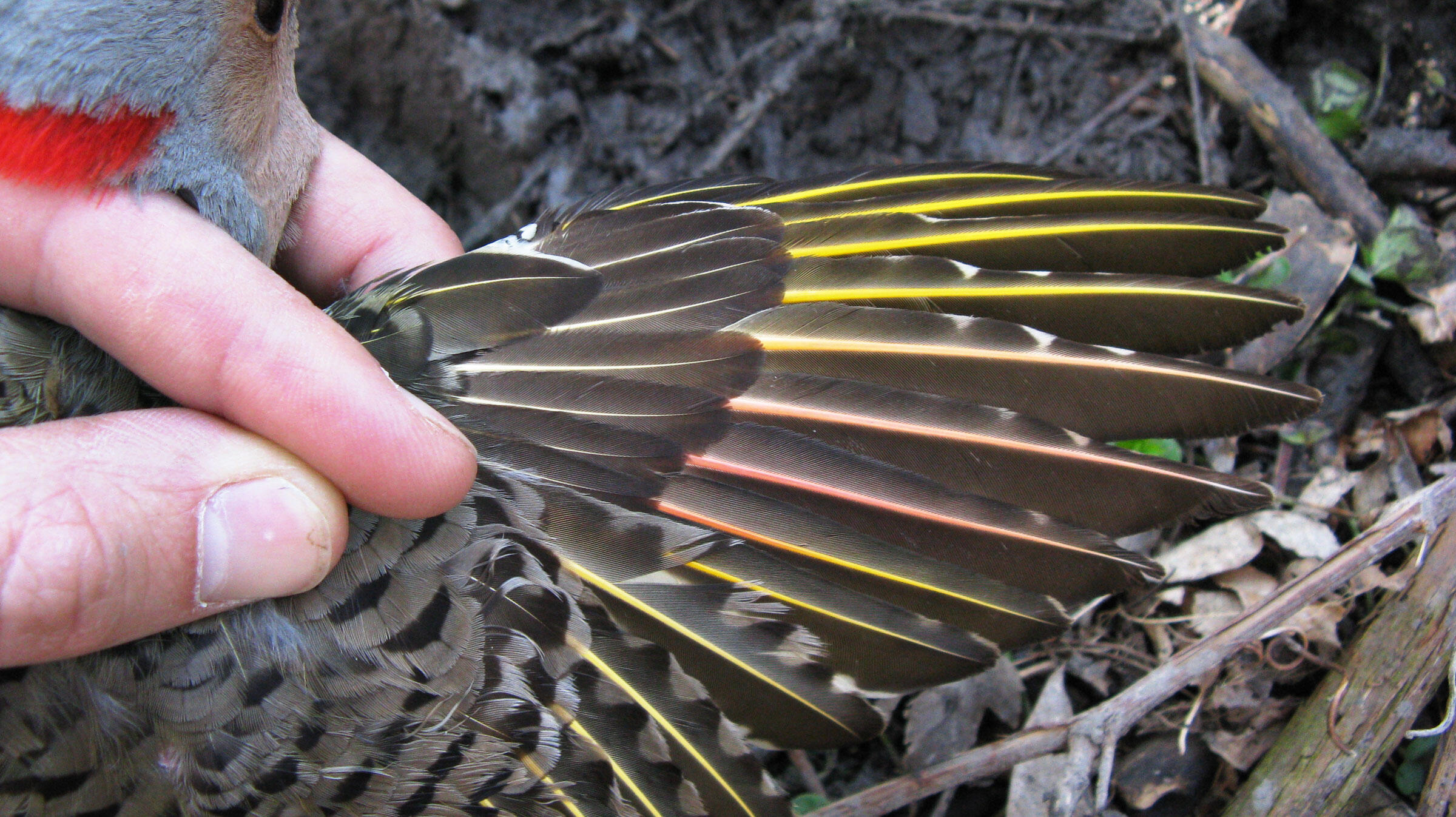 An old theory distracted researchers from the real cause for decades, but a new study points to a non-native species of honeysuckle as the culprit.

In 1843, as John James Audubon made his way up the Missouri River to Yellowstone, he came upon a group of woodpeckers “which I think will puzzle all the naturalists in the world,” he wrote. The five birds, all Northern Flickers, varied dramatically in color—some had flight feathers adorned with yellow, others with red, and still others landed somewhere in between.

Then, a century later, Audubon's journal entry proved true again when a different batch of oddly colored Flickers came to puzzle the world's naturalists. In the 1960s, some keen-eyed biologists noticed reddish Northern Flickers thousands of miles east of the hybrid zone. At first, ornithologists thought that genes from the reddish western birds had propogated through the Yellow-shafted population, all the way to the Atlantic coastline. But that explanation didn’t fit quite right. These red feathers weren't as red as those farther west, nor were they the salmon pink of the hybrids. They were more "coppery," and nobody could explain why.

A team of researchers finally solved this decades-long enigma, according to a new paper published this week in The Auk. As it turns out, the hybrid zone only distracted from the real cause of the color change in the east. "It has nothing to do with hybridization," says Jocelyn Hudon, curator of ornithology at Canada’s Royal Alberta Museum who led the new research. “It has to do with a food source.”

To shed light on the phenomenon, Hudon and his colleagues extracted pigments from museum specimens, and found that they were looking at two types of red feathers. While Red-shafted Flickers in the West get their coloration from a type of pigment called 4-keto-carotenoids, those aberrant individuals in the East are colored by a pigment called rhodoxanthin. Rhodoxanthin is rare in nature, and found in only a few plants. So Hudon figured: The birds must be eating the pigment. It had to be a food source that occurs within the range of the Yellow-shafted Flickers, and it had to be something available to eat during the birds' molt, when they replace their feathers (and feather pigments) with new ones.

The team then turned to wild-caught Northern Flickers at a Massachusetts banding station. The data showed that their color change occurred during summer, a fact that left Hudon with one reasonable conclusion: honeysuckle berries, which are a common source of rhodoxanthin during summertime. Honeysuckles—in particular, Tatarian and Morrow's honeysuckles and their hybrid, Bell's honeysuckle—were first introduced to the New World from Asia in the 1700s and 1800s, and feasting birds quickly dispersed their seeds throughout the eastern U.S. It's possible that Yellow-shafted Flickers have incorporated red pigments into their flight feathers since the late 1800s, but because berries comprise a small part of their bug-heavy diet, the color change is not always conspicuous. Which explains why it took biologists so long to notice.

"I've been birdwatching my whole life, and I've never noticed a Flicker with red feathers in its wings," says Auburn University biologist Geoff Hill, who recently discovered how birds convert yellow carotenoids into red pigments. For him, the new research provides some intellectual relief. "The thing that was always hard to believe was that these genes for plumage color would pop up thousands of miles away from the hybrid zone, and it just didn't really make any sense," he says. "This new study brings a little sense back to the whole story."

In retrospect, it shouldn't have been such a surprise, Hudon says. As a graduate student, he studied Cedar Waxwings sporting orange-tipped tail feathers in place of yellow ones, and later discovered the cause of anomalous red coloring in Baltimore Orioles. Both were attributed to rhodoxanthin from the same introduced honeysuckle bushes. "I'd been doing this all along, and it never clicked that it might be [the same cause]” for the Flickers, he says.

Invasive honeysuckle berries aren’t strictly bad for birds. They’re an easy food source when birds are in a pinch, but they’re kind of like junk food: Compared to native berries, they have less fat and nutrients that birds need to fuel their long-distance flights. Perhaps Northern Flickers could use a reminder that, when it comes to honeysuckle berries, you are what you eat—inside and out.