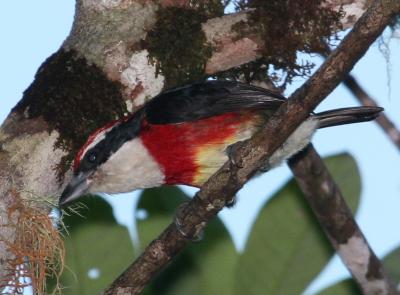 A new bird species has been discovered in the Peruvian Andes by recent graduates of Cornell University. The brightly-colored bird, called the Sira barbet or Capito fitzpatricki, is named after ornithologist John Fitzpatrick.

The Sira barbet was first spotted in 2008, when recent Cornell graduates Michael G. Harvey, Glenn Seeholzer, and Ben Winger were on an expedition to catalogue local bird species with Daniel Cáceres, a Peruvian field biologist.

The Sira barbet closely resembles another local bird, the scarlet-banded barbet. To verify that the bird was a new species, the team collaborated with Jason Weckstein from The Field Museum in Chicago. Weckstein compared the mitochondrial DNA of the Sira barbet to other species in the Capito genus, and his results confirmed that the barbet family tree has a new addition. The Sira barbet was officially described in the July issue of The Auk, the journal of the American Ornithologist’s Union.

The Sira barbet’s common name references the Cerros del Sira mountain range where the bird lives. The Cerros del Sira is an outlying ridge of the eastern Andes, covered in dense, fog-drenched forest, often called a cloud forest. Like the Amazonian jungle, these remote alpine forests are one of the few places left where new species can surprise scientists. Earlier this year, the Wildlife Conservation Society announced the discovery of over 365 new species from within Bahuaja Sonene National Park, in southeastern Peru. Researchers found 30 new birds, 2 mammals, and 233 species of butterflies and moths.

"Fitz has inspired generations of young ornithologists in scientific discovery and conservation," said Winger in a press release. "He was behind us all the way when we presented our plan for this expedition."

During his fieldwork in Peru Fitzpatrick discovered six new bird species, and it is fitting that the region’s newest species will now bear his name.

A Father-Son Adventure in Peru's Amazon