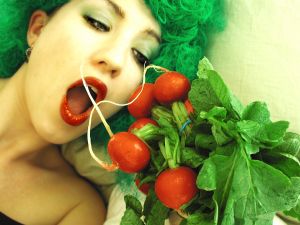 How far would you go to help fight climate change? How about eating less meat? Or none at all? Anyone can do it, says Mike Tidwell, author, climate change activist, recovering carnivore. His stomach still growls at the thought of sumptuous BBQ pork on a bun, but Tidwell quit meat cold turkey—excuse me, carrot—because he says the human hunger for burgers, chicken wings, and ham has turned our stomachs into a bigger driver of climate change than our cars.

In his article “Low Carbon Diet” (Audubon, January-February 2009), Tidwell points to all the energy resources squandered to put meat on our tables: huge volumes of petroleum products used to grow mass quantities of grains, which are harvested by thousands of gas-guzzling tractors, and fed to the millions of cows, pigs, chickens, and sheep that eventually become supper.

Then there are the gas byproducts: No matter which end of the cow they come from, methane and nitrous oxide are much more potent greenhouse gases than regular old carbon dioxide. Tidwell writes:

"Accounting for all factors, livestock production worldwide is responsible for a whopping 18 percent of the world’s total greenhouse gases. That’s more than the emissions of all the world’s cars, buses, planes, and trains combined."

If we don’t voluntarily pull in our belts and make some changes to our diets, Tidwell says climate change might do it for us:

"If we allow extreme global warming to become reality, an impact on the U.S. diet could very well be a great reduction in the amount of meat on our tables—a reduction imposed on us by nature instead of achieved by us through enlightened lifestyle changes. The wide and guaranteed availability of agriculturally productive land may simply cease. The crop yields we see now could shrink significantly, thanks to everything from weird weather to pest invasions."

As we embark on the New Year, Tidwell certainly offers some interesting food (vegetarian, of course) for thought. If you’re ready to start cutting the carbon out of your diet, check out some of Tidwell’s favorite cookbooks and recipes, as well as a historical view of vegetarianism, in this Audubon web exclusive.