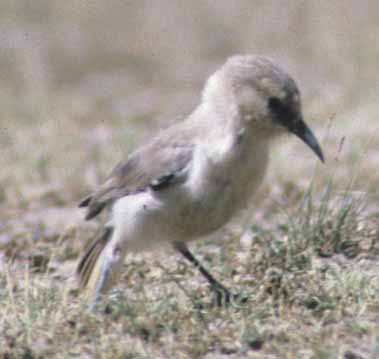 High on the Tibetan plateau’s steppes and windswept grasslands, a small bird searches for insects, digging through dirt and yak dung with its sturdy bill. It looks unremarkable—pale brown with slate-colored bill and feet, and no crests or talons or brilliant plumage. But the ground tit is a tough little bird, and now a team of scientists from China, Australia, and Sweden has revealed the genetics behind its adaptations to Tibet’s punishing climate. The results shed light on how the ground tit—and other species—survive in such harsh, high-elevation habitats.

The ground tit lives above the tree line, between 11,000 and 18,000 feet above sea level (humans begin to experience altitude sickness above 8,000 feet above sea level). At higher elevations, the plateau is chilly even in summer, and temperatures can drop suddenly and quickly. And the air here is perilously thin. Lhasa, the capital of Tibet, lies in at the lower end of the ground tit’s range, sitting at an elevation of about 12,000 feet. Here, already, there is only 68 percent of the oxygen found at sea level. Any bird attempting to eke out a living here must be built to withstand an extreme alpine locale.

Fortunately, the ground tit is such a bird. For a long time, scientists thought that the ground tit’s strong, decurved bill, long legs and size marked it as a member of the same family as crows and jays. But they eventually realized that in fact these birds belong to the songbird family Paridae, which in the United States includes the petite black-capped chickadee and tufted titmouse. The ground tit’s jay-like features, scientists suspected, were actually adaptations to the Tibetan environment.

Sure enough, the ground tit’s newly sequenced genome confirms these suspicions. The ground tit, researchers found, split off from other, arboreal tit species between 8 and 10 million years ago. At around the same time, the Tibetan plateau was pushing upwards, growing ever farther from the warm, oxygen-rich lands below. This sea change in their environment likely drove the ground tit to become a separate species.

Since then, the ground tit has evolved to better cope with the thin air on the Tibetan plateau. In their survey, the scientists identified genes involved in retooling the birds’ vascular network to combat low levels of oxygen. These included several for forming more blood vessels in the birds’ lungs and heart.

Compared to other birds the scientists examined, the ground tit also had more genes linked to energy metabolism. These extra genes allow the ground tit to rely more heavily on burning fats instead of carbohydrates (which yield less energy) for warmth.

The researchers found positive selection of genes related to bone formation that have left their mark on the ground tit’s appearance. It is larger than its lowland cousins, weighing about four times as much as a chickadee. Bulking up helps the ground tit stay warm; the larger an animal, the more slowly it loses heat.

Additionally, these birds have grown a longer bill and legs than their relatives. The long beak is ideal for rooting through soil during foraging, and the legs are perfect for hopping along the ground, where the ground tit nests, roosts, and forages.

The ground tit also has fewer genes linked to feather development, another upshot of a life spent on the ground rather than flying and perching in trees. Strangely, it also has fewer genes related to its immune system and ability to smell. The scientists theorize that this is because the cold, dry meadow environment the ground tit lives in offers fewer pathogens and less variety of scents.

The Tibetan plateau is enormous—at 965,000 square miles, it is nearly a third the size of the continental United States. It is home to stunning snow leopards and yaks and blood pheasants and antelope. But for all that the abundant ground tit looks less spectacular than the sleek leopard or crimson-splashed pheasant, it is remarkable in its own right. Where human interlopers shiver and gasp for breath, the hardy ground tit has evolved a successful formula for life on the Roof of the World.

Trade in Cashmere Threatens to Put Snow Leopards on the Brink