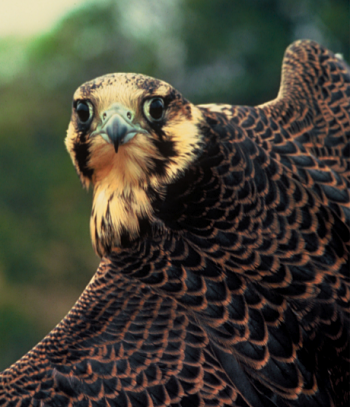 Only a few short years after being removed from the endangered species list, the American peregrine falcon—once considered a creature of nobility and grace—has transformed into an "unappreciative jerk," wildlife experts reported Monday.

According to workers at the Peregrine Fund, a nonprofit organization dedicated to protecting falcons around the world, the predatory bird has exhibited a complete change in attitude since its resurgence. Animal advocates have reportedly observed the falcon flaunting its magnificent 3.5-foot wingspan, nesting arrogantly atop nearby cliffs, and generally acting like "king s**t" wherever it goes.

"For decades, the peregrine falcon faced a very real and very serious threat," U.S. Fish and Wildlife Service deputy director Rowan Gould said. "There was a time when many of us feared we would never see this majestic creature again, when we did everything in our power to ensure that this marvel of nature would be around for generations to come."

Added Gould, "If only we'd known then what cocky little pricks they'd turn out to be."

In recent months, the peregrine falcon has continued to infuriate environmentalists by reclaiming its habitat without so much as a simple thank you, frequently and loudly mating in everyone's face, and hunting prey off the coast of Maine as though it were "master of the skies."

In addition, the blue-gray member of the Falconiformes order has put off dozens of its once-ardent supporters by reportedly just sitting there like it was invincible and never once on the brink of extinction.

"How about showing a little gratitude, pal?" said Dr. Michael Halpern, a behavioral ecologist and noted naturalist. "We didn't have to save you, you know. There were plenty of other species on that list that would've loved our help. Hundreds of other species that would've damn near polished our knobs had we chosen to save them."

April Fools! The rest of this article can be found at the Onion.