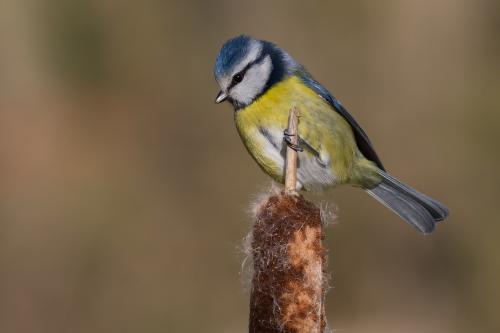 Blue tits are among the bird world’s most famous bandits. Ever since they were caught piercing the foil tops of milk bottles in the U.K. in 1921, they’ve had a reputation for their sticky beaks. But do these small, yellow and blue birds pick up innovations like the milk bottle trick by watching their peers at work? And do some birds learn new skills better than others?

To find out, scientists from the U.K., Canada, and Australia came up with a novel technique for the birds to learn: snagging tasty waxworms from trays. They caught twelve groups of wild blue tits and picked one bird from eight of the little flocks. These birds became tutors—the researchers taught them how to get at the worms so they could perform the trick in front of their peers. The other four groups had no tutor to watch.

Without a demonstrator, none of the tits came up with a solution get the waxworms out of the tray. But many tits in the flocks with a tutor followed that bird’s example, piercing foil or flipping lids—on average, about half of them succeeded at accessing the coveted worm treats.

In addition, which birds learned to swipe the worms depended on what sex and how old the birds were, as well as their social status. The scientists defined dominant males as the birds they observed monopolizing a sunflower seed feeder before the experiment started. The subordinate males were not as competitive when it came to staking out a spot at the feeder, but they were more likely to learn the techniques for getting at the waxworms.

The most successful learners were juvenile female tits. The researchers theorize that that the female birds might have been on the lookout for any information that could help them access for food because, as the ones who lay eggs, they have higher nutritional needs than the males. But that would not explain the younger females’ edge. So the scientists speculate that perhaps young females, who are new to the flock, are more receptive to social information that might make their transition easier than are older, more confident birds.

Like people who eschew crowded hotspots after watching their friend score lunch from a little-known restaurant, these birds have learned to pay attention to how their peers find food. Except, of course, the birds’ reward is not pizza or a sandwich but a plump, juicy waxworm.

One Bird's Formula for Survival on the Roof of the World