One of the many winged residents of the Center for Birds of Prey. Photo credit: Justine E. Hausheer

Here comes Trouble. He’s perched on Matt Smith’s arm, cocking his head left and right as the summer cicadas buzz high in the oaks. His eyes are a fierce yellow, the plumage on his head and tail is a vivid white, and the feathers on his back and wings are a deep, glossy brown. Suddenly he breaks into a round of flapping, losing some of his characteristic avian grace as he lurches between wingbeats. After a few seconds Trouble quiets down, cocks his head, and shoots an imperious glare in my direction.

Trouble the bald eagle is aptly named, for his school bus-yellow bill almost landed him in big, big trouble. The top and bottom curves of his bill cross abnormally, instead of fitting neatly together. He would have died without human help.

Eagle beaks and talons grow like human fingernails, explains Katie Warner, the program manager for the Maitland Center for Birds of Prey, where Trouble now lives. If he was left in the wild, his beak would have eventually hooked together and he would have starved to death.

Luckily, a photographer found him when he was still young and brought him to the center. “We did several surgeries to adjust his jaw,” says Warner, “and we keep his beak drummeled so he can rip and tear his food.” Now Trouble is one of their ambassador birds, traveling to schools across Florida and eyeballing schoolchildren from his perch on Smith’s gloved forearm.

Trouble is on the smaller size for a bald eagle, but Smith, the center’s EagleWatch coordinator, says that he makes up for his lack of size with attitude. Moments later, Smith steadies himself as Trouble breaks into another round of flapping. 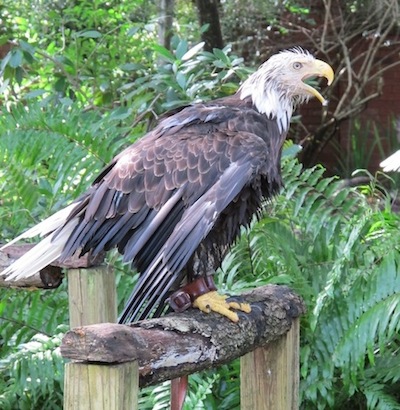 Founded in 1979, the Center for Birds of Prey takes in more than just bald eagles. Injured ospreys, hawks, kites, owls, and even vultures are admitted from around the state. Last year the center admitted 620 birds, and by the end of August they are already up to 536 patients. Warner says their busiest months are March, April, and May, when they receive an influx of young nestlings. “We usually receive about 20% of our overall patient load in those months,” she says.

The center’s clinic has an operating lab, where they process blood work and fecal samples. Injured birds can also be x-rayed on site in their radiology room, and a local veterinarian assists with surgeries and consultations. “We operate pretty much like a veterinary hospital,” says Warner. 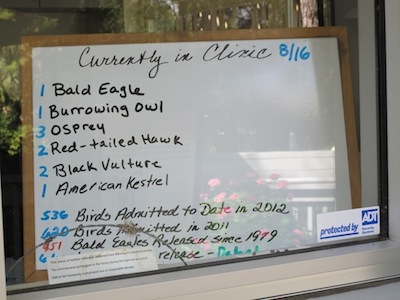 This patient signboard greets visitors to the center. The string of barbed wire in the corner was tangled in the wing of a patient. Photo credit: Justine E. Hausheer

The center’s newest patient is a bedraggled barred owl. Robert, a clinic volunteer, grips the owl tightly in the crook of his arm, while his colleague Beth carefully flexes the owl’s wing to assess the damage. The owl hoots softly as Robert succinctly describes the bird’s injuries:  “Fractured everything.” Typical of vehicle collisions, the owl has a broken wing and two broken legs.

“Most injuries we see are from vehicle strikes, but we get a handful of electrocutions from power lines,” says Warner. “Unfortunately, we will also see some poisonings and some gunshots.” A few weeks earlier the center received a very unusual patient?-a vulture with a target arrow sticking through its body. Amazingly, the arrow missed every bone and vital organ, and the bird survived without aid for at least a week before someone found him and brought him to the center.

Most of the center’s patients are found by locals, but occasionally other animal rehabilitators will ask for assistance. After spending anywhere from two to four weeks in the clinic, birds move to the outdoor flight barns where they can stretch their wings and rebuild muscle strength and mobility.

With hundreds of injured birds coming in, it’s heartening to know that about 40 percent make it back to the wild. Birds that are too severely injured to survive on their own are placed in zoos and other wildlife facilities around the state. 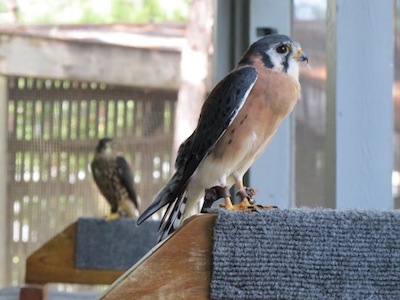 The clinic area is not open to visitors, but the center’s three acres on the shores of Lake Sybelia house many of the birds that cannot be released. It’s not a quiet place?the loopy whistles of bald eagles and the screechy chirps of ospreys rent the air at odd intervals. Visitors can amble through the enclosures, watching unmistakable crested caracaras or sleepy owls huddling in the upper corners of their enclosures. The center’s main building, a 1920s bungalow-style house, contains educational displays about birds of prey. Smaller birds, like kestrels and small owls, greet visitors on the house’s porch.

While he can’t confirm my suspicions, Trouble looks quite content. After Smith transferred him to his outdoor perch, Trouble got down to business and took thorough bath in his water-filled plastic bin. True to his name, he then set about disturbing the peace with his high-pitches calls. Thanks to the work of the Audubon Birds of Prey Center, this little eagle with a crooked bill got a second chance. 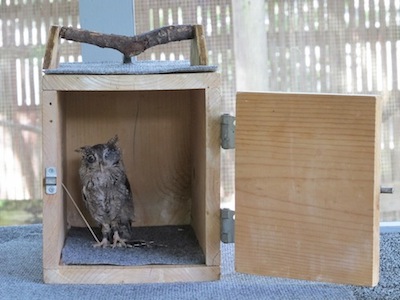 Visitor Information
• Hours: 10:00am – 4:00pm Tuesday through Sunday. The center is closed on Monday.
• Admission: $5 for adults and $4 for children over the age of three.
• Directions: The Center for Birds of Prey is located at 1101 Audubon Way, Maitland, Florida 32751
• Before you go: Check the website for any upcoming events, like the annual baby owl shower in the spring.