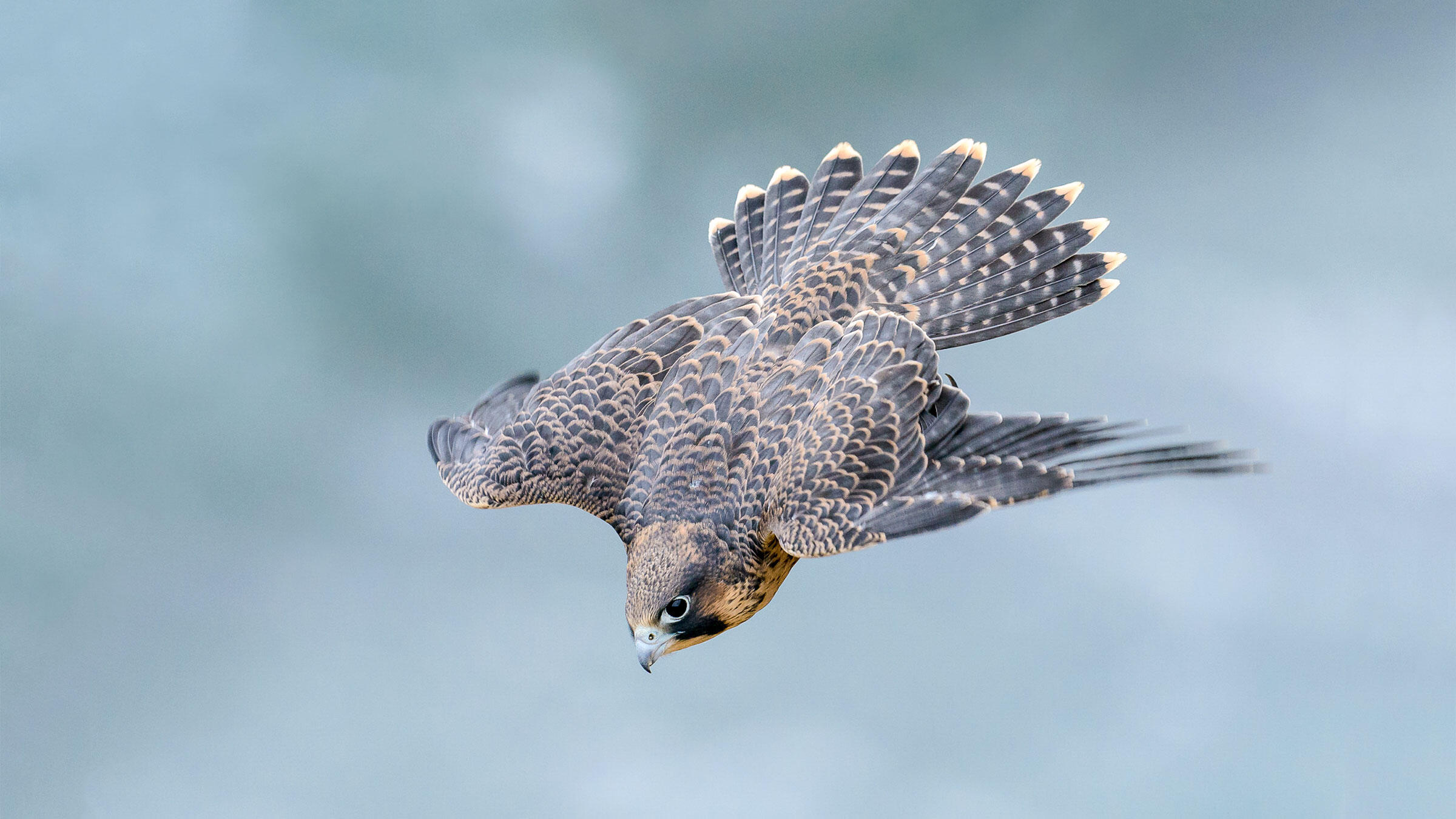 Peregrine Falcons are famed for their hunting and flying prowess, but their methods have been a mystery. A new study, however, shows that their strategy and form is similar to that of missiles and bobsledders. Photo: Bruno Struck/Audubon Photography Awards

Research Reveals Exactly Why Peregrine Falcons Are so Deadly

Cameras and simulations are finally enabling scientists to study the nuances of the raptors' extreme hunting techniques.

When it comes to hunting on the fly, nothing beats the Peregrine Falcon. By folding its wings in to minimize drag, the boomerang-shaped birds can hurtle thousands of feet through the air at speeds of close to 200 miles per hour—an unparalleled maneuver in the animal kingdom.

Yet as much as the Peregrine is a paragon, it’s also an enigma. For decades, scientists have tried to understand how the raptor pulls off its feats without hurting itself or missing the mark completely. One idea holds that in lieu of brakes, the falcon unfurls its wings just before it strikes its prey, reducing its speed enough to make any last-minute adjustments and avoid injury. ​

A study published yesterday in PLOS Computational Biology shows that the strategy is more complex, however. The species, says lead author Robin Mills, depends on an innate navigational system—similar to that found in military-grade missiles. And while the birds’ attack-success rates can vary wildly by location, season, sex, and target type, it’s evident that there’s some predictive power behind their dives.

It all starts with the Peregrine’s velocity. In the past, scientists thought extreme speeds added an element of surprise to the attack, says Mills, a behavioral ecology researcher at the University of Groningen in the Netherlands. But this also seemed counterintuitive to the bird’s ability to reliably hit its prey . . . and not go splat afterward.

Mills's work builds on data collected from GPS trackers and body cams on eight falcons, dispatched by University of Oxford zoologists. Delving into the field results, he realized that the bird's speeds and “trajectories were surprisingly well explained by the same guidance laws that missiles use to intercept targets.”

One way to hit a moving object in midair is to measure the speed and direction of the target, gauge when and where to make contact, and then launch forward in the right direction, at the exact right speed. But that’s not the most effective approach, given that it leaves little room to make adjustments on the fly. That’s why modern missiles use proportional navigation, in which the system is constantly sizing up the line of sight and making small tweaks en route.

Likewise, a Peregrine Falcon uses proportional navigation by making slight adjustments in wing position and speed before the moment of impact. How the raptor assesses the path to the target is unclear, but researchers predict it’s probably through a combination of inertial and visual sensors.

Still, that doesn’t explain why falcons operate at such extreme speeds. So, Mills and his colleagues created a computer simulation that incorporates the various aerodynamic and biomechanical mechanisms of bird flight—things such as wing flap and tuck—with the Peregrine’s proportional navigation strategy as it hunts European Starlings. After running millions of simulations with various dive trajectories, the team found many unrecognized advantages to agility provided by the bird's velocity.

For instance, high-speed stooping (aka diving) helps increase aerodynamic force, which leads to better maneuverability. When the falcon pulls back its wings and builds up speed, it minimizes the need to steer. (Think of a bobsled team tucked tightly together, using velocity and forward motion to softly navigate the track.) A steep angle of attack also puts the bird in a more direct line to the prey.

Arguably, the most interesting finding, Mills says, is that the Peregrine Falcon needs to be very controlled to maintain a stable trajectory. It's like the concentration required of a Formula 1 racecar driver steering straight at 200-plus miles per hour. “The stoop can therefore be considered a highly specialist attack strategy,” Mills adds.

Other falcon experts think the results are fascinating as well. “It’s an impressive and very detailed study with reasonable tests and calculations,” says Dominik Fischer, a veterinarian at the University of Giessen in Germany, who’s previously studied Peregrine Falcon flight.

While the simulations provide some wild new details about Peregrines, they still need to be verified in a real-world setting. Mills and his crew are already in the process of collecting data on falcons in Scotland, so it’s just a matter of time before they can make more definitive conclusions. They also hope to study the attack strategies of additional raptor species, including the Northern Goshawk, Harris’s Hawk, and Eurasian Sparrowhawk, to see if they employ the same tactics.

New technology has obviously been the key factor in helping scientists unravel how and why the diving raptor works. After hundreds of years of admiring such a mystifying behavior, we’re closer to fully appreciating and understanding the details that make it possible.