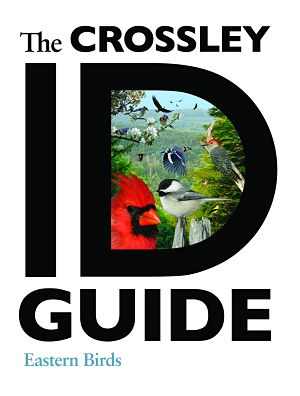 One testament to the growing popularity of birding is the number of identification guides to North American birds which have been published during the past several years. Many are innovative in their choice of images, in the number of images they offer of each bird, and in their texts. One truly useful innovation is in the number of specialty guides to shorebirds, gulls, raptors, and other taxa. As much as I love bird guides I had resolved to stop writing about them because I could not imagine that there could ever be anything new to say. The new Crossley ID Guide has proven me wrong. There is, in fact, a lot to say about this newest entry.

When Roger Tory Peterson published his field guide in 1934 he thought of it as a companion to one’s binoculars – as a faithful birding friend which we could whip out of our pockets when stumped. Most bird guides published since then have kept faith with Peterson’s idea that a field guide should be a constant companion. But Peterson’s book was published when birding was in its infancy, a time when there weren’t many aids to identification for recreational birders.. Although I have always carried a field guide and encourage others to do so, I now wonder if carrying a book afield isn’t a crutch which has prevented many of us (myself included) from becoming better birders. British birders (arguably the best birders anywhere) never carry them – not if they want to be taken seriously by their fellows. Many Brits carry notebooks instead and use them to make detailed notes about what they are seeing. Good birders have developed the habit of studying their field guides at home, in their tents, motel rooms, and in their cars. They spend their time afield looking – really looking – at what they are seeing. Yogi Berra has said that one can observe a lot by looking. Richard Crossley must have studied Yogi because this philosophy is the key to the new Crossley ID Guide. He has designed his book to help you learn the skills of critical looking.

Think of the habit of carrying a field guide like training wheels on your bicycle. There’s nothing wrong with them but you need to take them off if you want to go touring or ride in a race. It’s the same with birding. If you want to improve your birding skills you need to regularly spend time with your field guide at home rather than relying on it in the field. If you leave your field guide on the shelf until you go birding you will never improve. I am telling you this because Richard Crossley is British and earned his birding bona fides in that ultra-competitive culture. Based on his own learning experience he has designed his ID Guide to be a reference book rather than a field guide. Like Peterson, Crossley has a messiah complex – he a man on a mission. His mission is turn you and me into better birders. He designed his ID Guide to help those of us who really want to improve and who are willing to spend a little time working on our skills.

So what’s so different about the Crossley ID Guide? Everything. Crossley has designed his guide to reflect the way we see and identify birds. We identify birds by their size, shape, structure, behavior, habitat, and field marks. We seen birds at close range, at middle and long distances, on the ground, in flight, in trees, and on the water. I have listed field marks last among diagnostic clues because they are, most often, the last thing that we see. We (you and I) emphasize field marks when we talk about birds because our field guides have trained us to think of them as the key to identification. But birders, novices and experts, see all the other clues long before they see field marks. Most of us just haven’t trained ourselves to sort through all the information we are receive from complex patterns in nature. The Crossley ID Guide is designed to get you thinking differently by helping you sort through all the clues.

Like other guides, the plates are the heart of Crossley’s book. Crossley’s plates are very different from any others in that each plate is a composite consisting of many photographs of the subject bird. The plates show the bird at close range and at all the distances in which you are likely to see it in nature. The compositions include birds in different plumages and in all the postures and attitudes in which they appear in nature. Crossley’s birds are flying, floating, walking, and roosting. The birds are shown in their habitats. They are at ease and in motion. To anyone used to looking at traditional field guides, Crossley’s plates are jarring. They are too busy. As in nature, the views appear to contain too much information and not enough. Although Crossley is one of our best bird photographers, many of the photos are not sharp enough or bright enough.  Look at the sample plate below:

It's a lot to process, but after pouring over these plates for the past several months I can tell you that they are extremely valuable teaching tools. Crossley’s idea is to show us the birds as we see them in nature. After passing through my initial impression I find that I routinely become completely absorbed in whichever plate I am looking at. Here is a recipe for a better way to learn birds and to retain what you learn. Get absorbed in Crossley’s complex images and refer back and forth between them and the simpler images of a more traditional field guide. Do this at your leisure. Then go outdoors to test your ability to recognize newly learned patterns. Make detailed notes about what you see and then refer back to your ID guides.

The plates are organized to be more useful than guides which stick to the taxonomic order – the order in which birds appear in the fossil record. Taxonomy is useful in conveying our most current understanding of evolutionary relationships and in conveying a sense of scientific rigor, but organizing images this way is far less useful when you are trying to compare two similar appearing candidate birds to figure out what you have seen. Since the taxonomic order changes far more frequently than it did before the age of molecular biology, books purporting to follow taxonomic relationships are ephemeral in their accuracy. Crossley has organized his ID Guide by grouping similar looking birds to make it easier to find and compare birds.

Crossley also takes a different approach to the way he presents bird names. In addition to the scientific and common names, Crossley includes the alpha code shorthand used for decades by bird banders. Thus a Great blue heron is a GBHE. A Red-tailed hawk is a RTHA. Frankly, I am content with common names. I like old names like “Timberdoodle,” “Baldpate,” “Marsh hawk,” and “Louisiana heron” better than I like the new names and have argued with friends on the AOU taxonomy committee about leaving common names alone. But, like scientific names, common names change and are inconsistent between regions and between the US and Britain. So I have come to appreciate the logic of standardizing nomenclature.

If you want to be a better birder you will find the new Crossley ID Guide to be an major innovation and a valuable tool. It will not replace one of the more traditional field guides, but this one belongs in your library – or rather it belongs on your study table. Spend fifteen or twenty minutes a day with your Crossley ID Guide and a few more minutes with your traditional guide to focus on field marks. Try leaving your field guide home or in the car the next time you go birding. Now watch how quickly your skills advance.