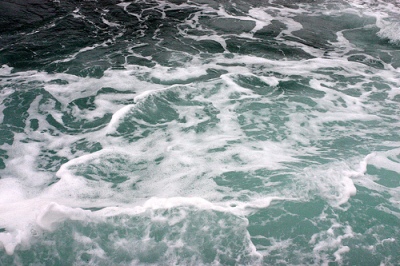 The oceans are afloat with boats, buoys, and ships. But scientists are sending another kind of sea-craft afloat in the great blue: robots. A variety of ocean-going robotic devices are setting sail to help monitor sharks and rebuild coral reefs.

This high-tech surfboard is cruising the waves along California's Pacific coast, a famous hotspot for great white sharks. Marine biologist Barbara Block of Stanford studies oceanic predators like great whites by tagging them with acoustic tags that emit a signature sound. These sounds are picked up by stationary sensors when a shark swims within 1,000 feet, allowing scientists to track its movement. Block has tagged 120 great whites and a several other shark species.

Three stationary buoys pick up sounds from the acoustic tags, but the robot, called the Wave Glider, cruises the ocean to reach waters outside the range of the buoys. This first Wave Glider is called the Carey, after notable fish biologist George Carey. Built by California company Liquid Robotics, it uses the energy of the surrounding waves to propel itself along a set route. Though simply designed, this robot is decked out with scientific equipment. Solar panels atop the surfboard power a connection to satellites, and an acoustic sensor is attached underneath to pick up acoustic signals.

Amazingly, the robot not only provides Block with near real-time data, but is also sends data to a special iPhone and iPad app, called Shark Net, that lets anyone track the locations of 20 great whites. If this first test goes well, Block hopes to create a “wired ocean” by deploying additional Wave Gliders to monitor sharks and other sea life on the entire west coast. 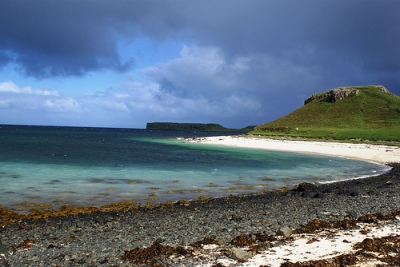 Coral reefs are usually found in tropical waters, but the coast of western Scotland has its own cold-water reefs. Photo credit: Roy Saplin / CC BY-NC 2.0

Scotland is not known as a tropical local, but the waters off its western coast are home to reef-building corals that, like their tropical relatives, provide critical habitat for other ocean species. But the reefs are often damaged by bottom fishing and can take decades to rebuild, even when scuba-divers lend a helping hand.

Lea-Anne Henry, from Heriot Watt University, is speeding up the process by developing roving robots to rebuild and repair these delicate reefs one piece at a time. Called autonomous underwater vehicles, the robots will be programmed to recognize coral from other things on the ocean floor like rocks, garbage, or sea creatures. The AUVs will pick out pieces of broken coral and re-cement them to the reef. Henry is currently designing the programming behind the robots, which she hopes can be used on reefs around the world.