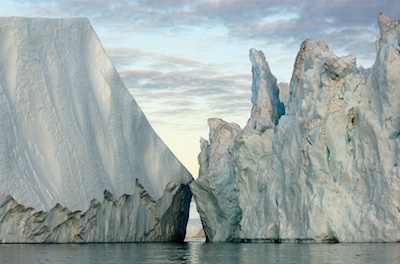 View Photo Gallery: This photograph, of Ilulissat Isfjord, Greenland, is just one of the stunning images from James Balog’s Ice: Portraits of Vanishing Glaciers.

Today the Intergovernmental Panel on Climate Change (IPCC) released a summary of the first portion of its latest report on global warming.  The major take-home message: Climate scientists can now say with 95 percent certainty that humans are the primary cause of climate change since 1950.

The IPCC’s report represents an evaluation of all climate research to date, brought together in a massive publication to inform policymakers about the state of our planet and its future.

Nature sums up other key conclusions in the editorial “The Final Assessment:” “Yes, greenhouse gases are changing the climate. Yes, we are already seeing substantial impacts, and more are on the way. And yes, this adds up to a problem for society that is significant and warrants immediate attention.”

Hundreds of climate scientists collaborate on the panel’s major reports, which the IPCC publishes roughly every five years (with shorter publications appearing more regularly). But many experts argue that the panel needs to stop developing behemoth documents twice a decade and shift instead to publishing shorter topically focused reports that can more practically guide policy—as with its 2012 special report on extreme weather events.

We’ve pulled together some of the best reporting and resources for learning more about this report, which will be released in stages over the next year.

Start off with John Upton’s excellent primer on Grist, WTF is the IPCC?

Upton also summarizes the findings, What the IPCC found: The big news from the new climate assessment

For those of you wondering why certainty is a “mere” 95%, check out Seth Borenstein’s answer on the AP: What 95% Certainty Means to Scientists

Nature has pulled together an in-depth package “Outlook for Earth” on the IPCC, with news coverage and commentary—not to mention a great graphical history of the IPCC

Scientific American’s David Biello reviews the impacts in Global Warming Is Real IPCC Repeats, Now Can We Do Something about It?

Brad Plumer at The Washington Post offers some context—summing it all up in his headline: The science of global warming has changed a lot in 25 years. The basic conclusions haven’t.

Last but not least, here’s the 36-page summary itself, replete with colorful/terrifying figures, IPCC Summary for Policymakers

Cause and Effect, by Katherine Bagley