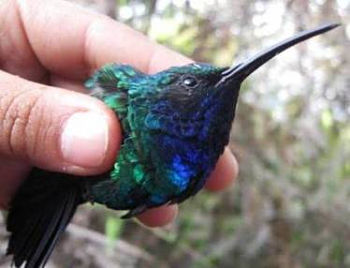 For the first time ever, a living Santa Marta Sabrewing hummingbird was photographed in the El Dorado Bird Reserve located in the Santa Marta Mountains of northern Colombia. The hummer, which the International Union for Conservation of Nature lists as Endangered, was found in an area that was set to be turned into a development for vacation homes just four years ago in 2006.

In a conservation effort that has evidently paid off, the American Bird Conservancy and Conservation International purchased the 1,600-acre plot and turned it into a reserve.

The Sierra Nevada de Santa Marta native flyer has been sighted since 2000, but its existence in the reserve was unconfirmed until now. The photographer, Laura Cardenas, took the shot at around 6,200 feet where she was monitoring migratory birds for a research project she had been conducting.

“This confirmation of the Santa Marta Sabrewing further emphasizes the national and global importance of the El Dorado Nature Reserve for endemic birds and wildlife,” said George Fenwick, president of ABC said in a press release.

Santa Marta Sabrewing, at 13 cm, are considered large hummingbirds and generally display green feathering. Population numbers are estimated between 2,500 and 9,999with a range of only a little over 600 square miles. It is endemic to the Santa Marta mountains.

For more hummingbird action, check out a review on the PBS production - Hummingbirds: Magic in the Air.