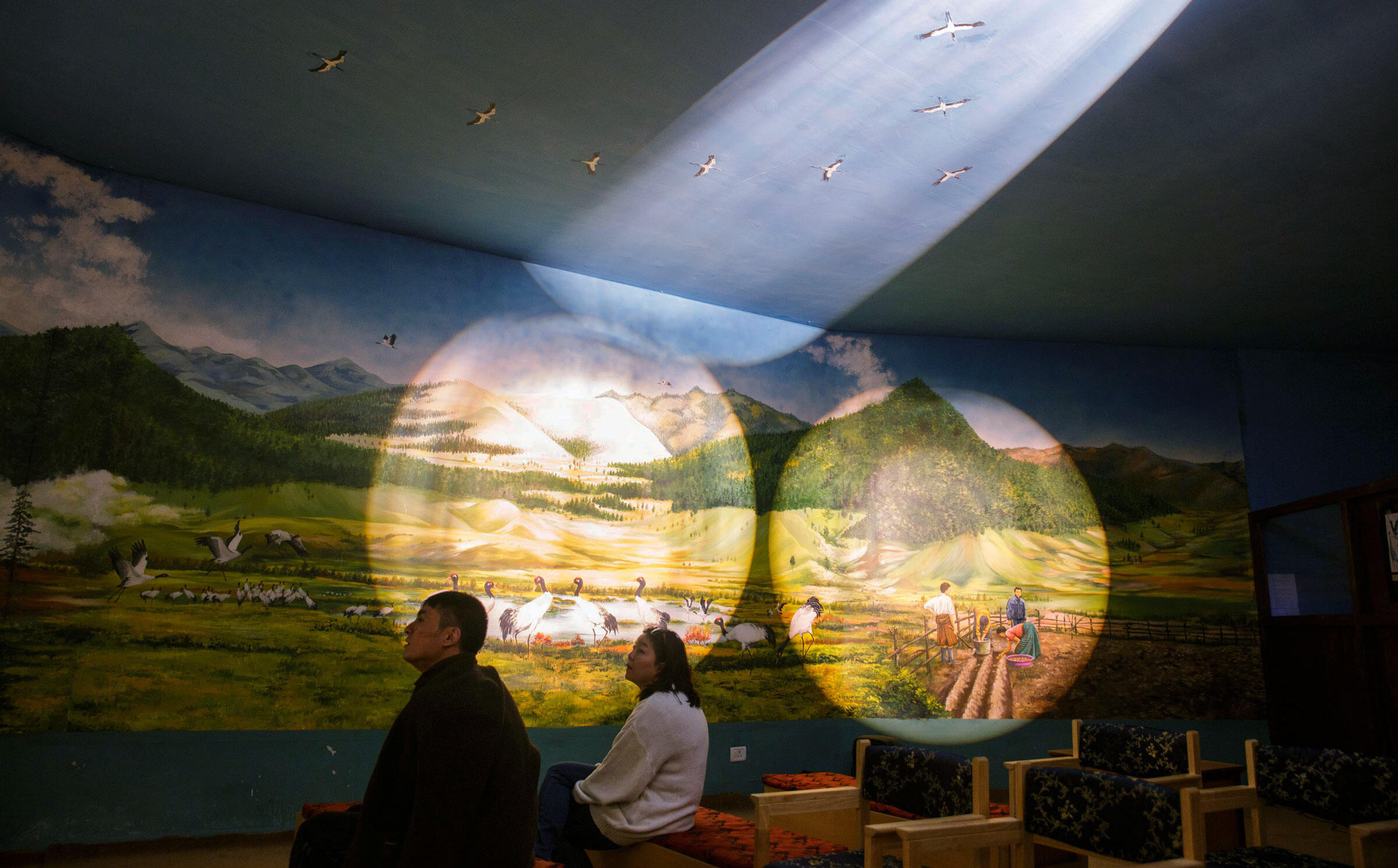 Visitors to the Black-necked Crane information center run by the Royal Society for Protection of Nature (RSPN) learn more about the birds and their significance to the people of Bhutan. Photo: Ambika Singh

The people of this tiny country have made huge strides to protect the vulnerable bird, including holding an annual festival each November.

Each winter the people of Bhutan’s Phobjikha Valley await the return of Black-necked Cranes. The stately four-foot-tall birds migrate from their breeding grounds in the upper Tibetan Plateau to this remote timber-lined bowl surrounded by massive Himalayan peaks, and roost there until spring amid the alpine wetlands. To the Buddhists of this tiny kingdom, the birds are heavenly emissaries, avatars of long-gone ancestors and lost loved ones, signifying longevity, peace, and prosperity. The graceful birds are so culturally important that they’re painted on the sides of homes and businesses throughout the country. In Phobjikha, farmers believe the birds’ presence ensures healthy crops, and tourists travel to the remote valley from around the world to see the cranes.

So when the birds showed up late last year, “everybody was very worried,” says ecologist Rebecca Pradhan of the Royal Society for the Protection of Nature (RSPN), a nonprofit in Bhutan.

Phobjikha is one of the last strongholds of the threatened Black-necked Crane, a close cousin to the endangered Whooping Crane of North America. The species, only discovered in 1876 due to its remote alpine range in China, Tibet, Bhutan, and India, is vulnerable. Across South Asia, there are as few as 5,000 of the birds in the wild. Grazing, agriculture, and hydroelectricity have all taken a toll on the high-altitude wetlands that the birds depend on, and climate change may further alter their habitat.

Bhutan is taking significant strides to help ensure that the cranes continue to return to the valley, where around 500 of them spend the winter, and to provide economic benefits for its human inhabitants. Those actions stem from the strong Buddhist tradition of compassion and the central tenets of the government of Bhutan’s vaunted Gross National Happiness policy, which strives to balance economic development with environmental protection. With just 750,000 citizens, Bhutan has already safeguarded 60 percent of its forest cover, banning export logging, helping make it the world’s first carbon-negative country. “Economic growth is important,” said Prime Minister Tshering Tobgay in a recent TED talk, "but economic growth must not come from undermining our unique culture or our pristine environment."

In 2008, when the government was poised to erect power lines that could interfere with the cranes’ flight paths as part of a national effort to bring electricity to the local villages, RSPN stepped in to pay for solar lighting and ultimately convinced the national energy corporation to invest in an underground power grid. With the help of the Wisconsin-based International Crane Foundation (ICF), RSPN has also built weirs to expand wetlands, paid farmers to forgo expansion of some croplands, and constructed Bhutan’s first solid waste dump. “Bhutan offers winter habitat that is very important [for Black-necked Cranes],” says George Archibald, director of the ICF. 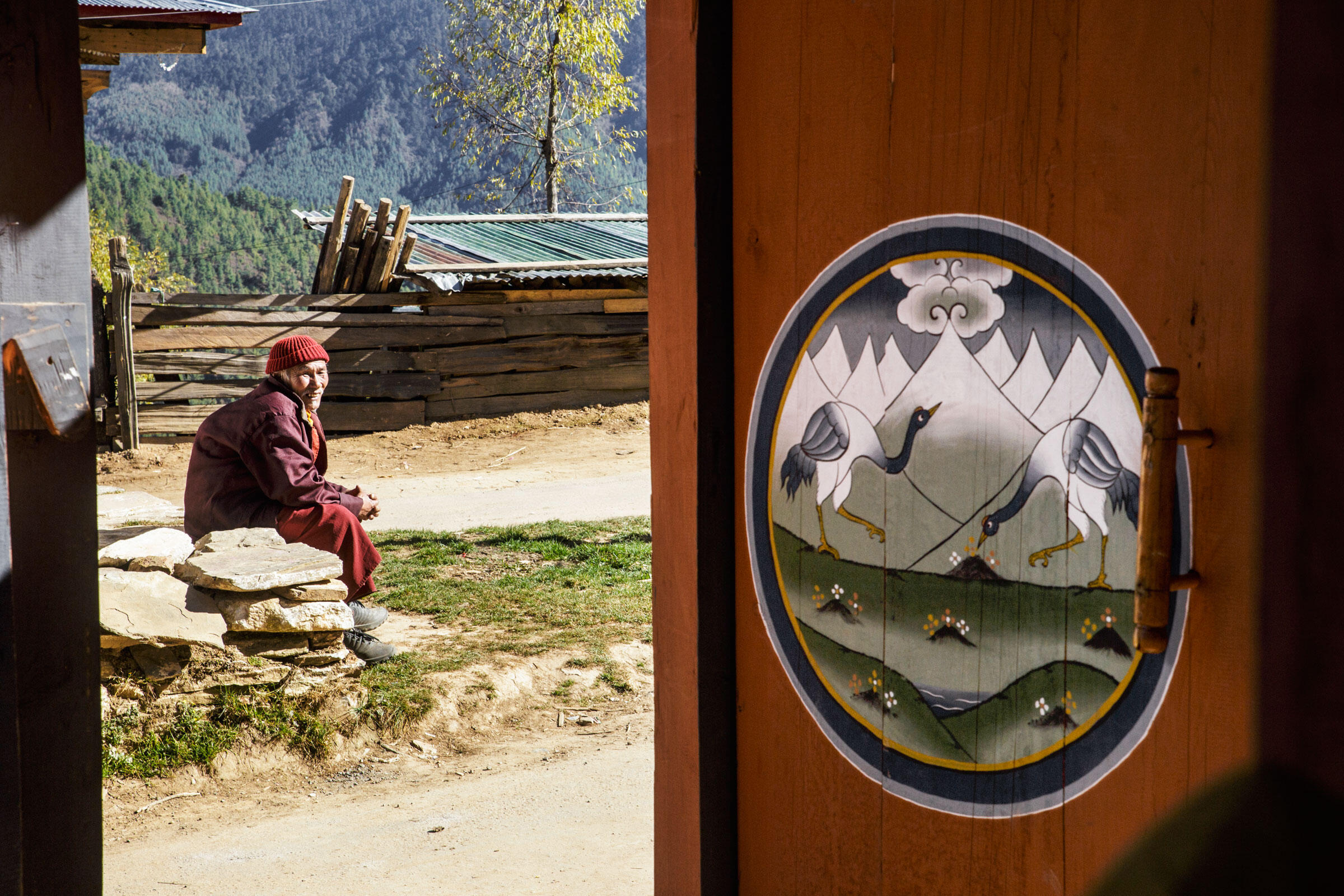 A monk sits outside the Gangtey Dzong, an ancient monastery. In the village surrounding the Dzong, the door to a residence depicts two Black-necked Cranes. Photo: Ambika Singh 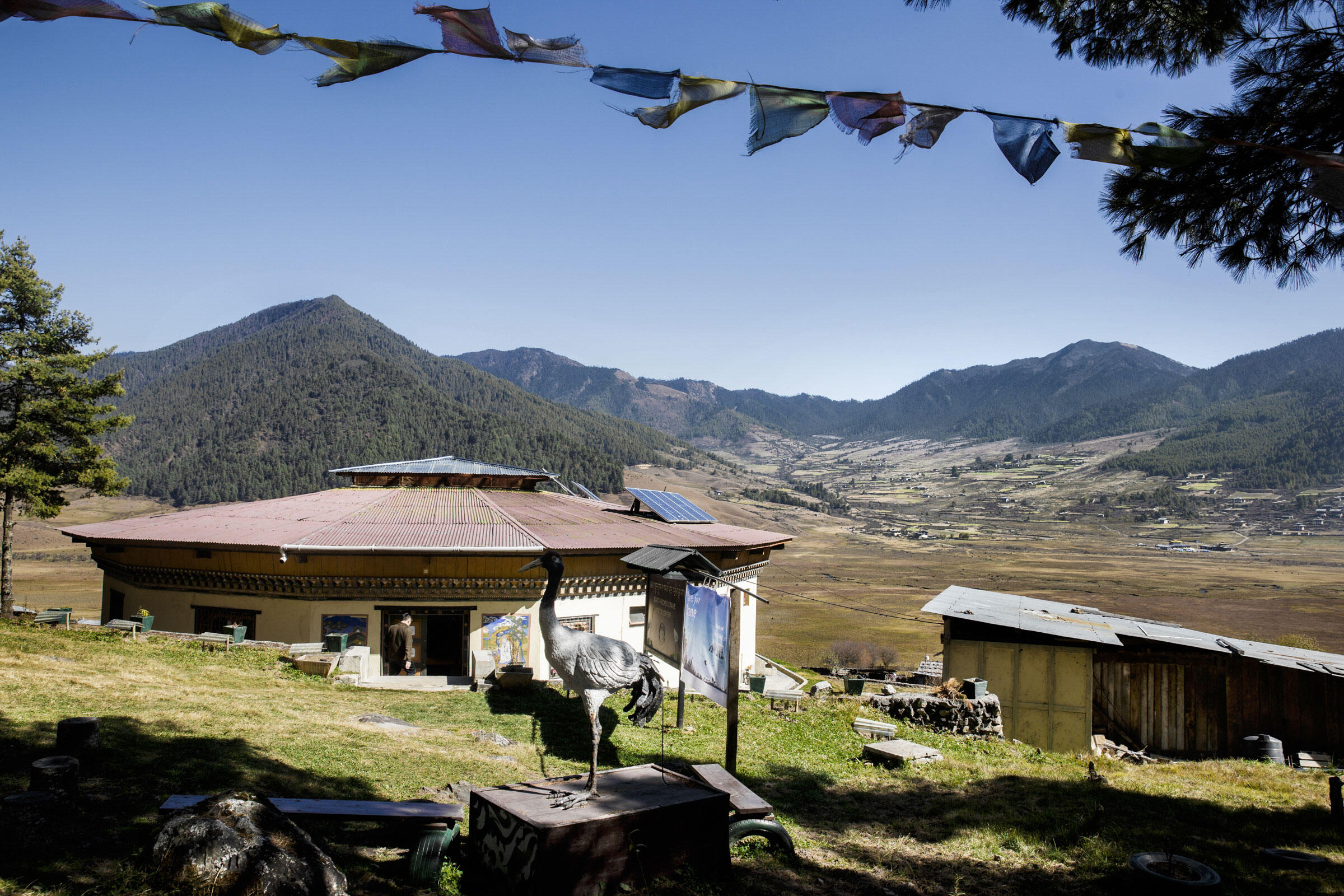 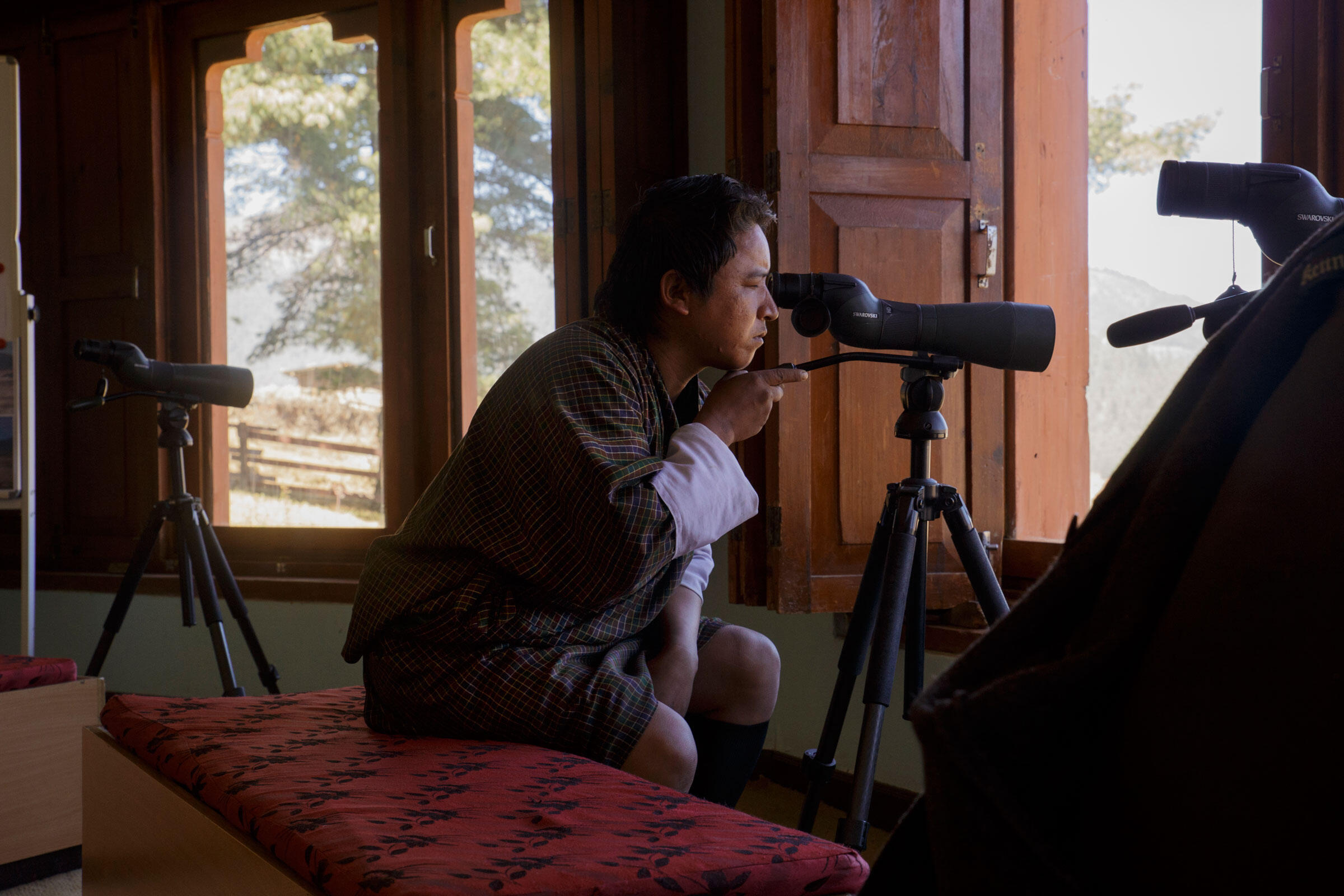 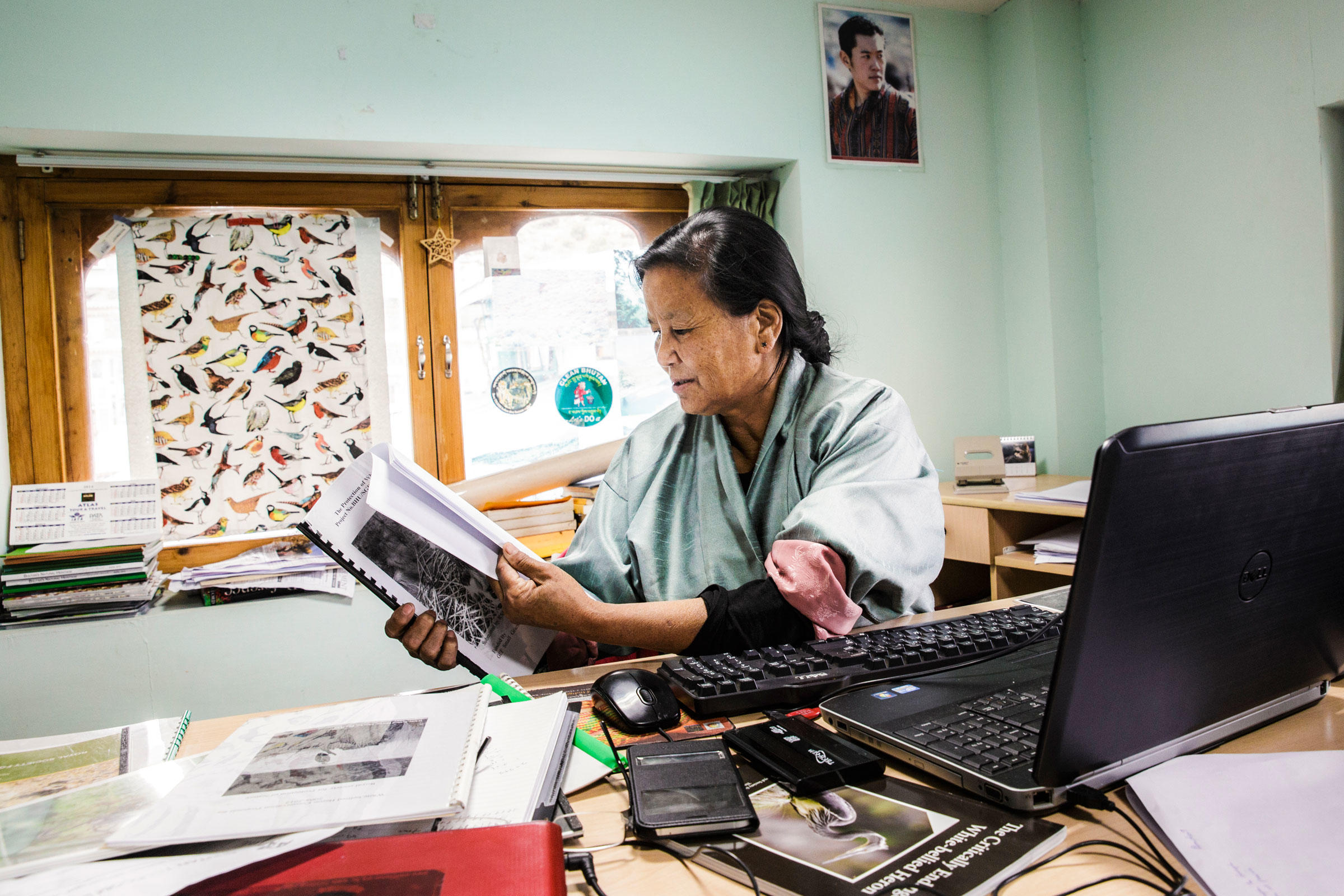 Rebecca Pradhan, a senior reseach officer at the RSPN, in her office in the capital, Thimphu. Because the crane conservation efforts have gone so well, Pradham is now part of a project aimed at saving the White-bellied Heron, of which there are presently 28 in Bhutan. Photo: Ambika Singh 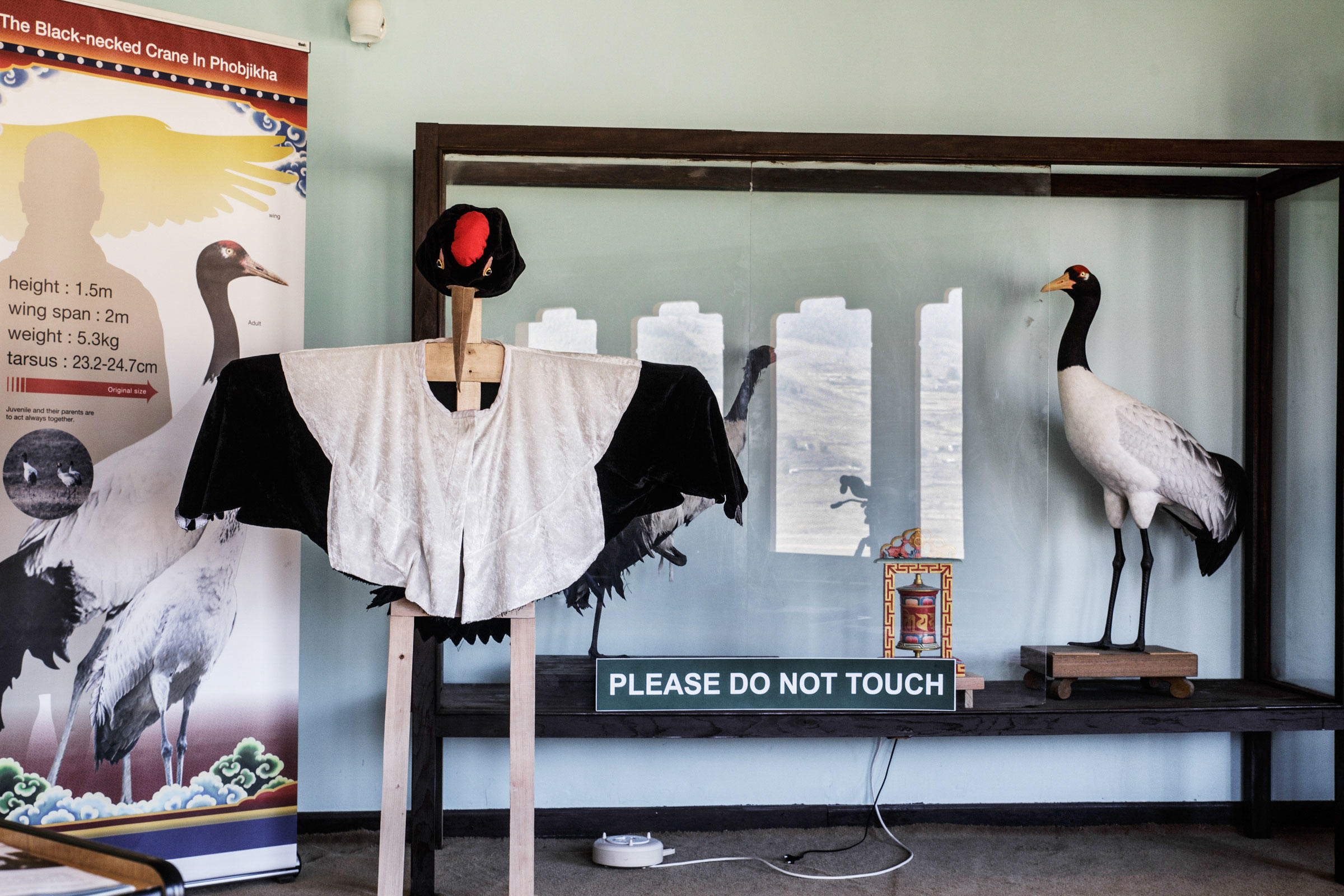 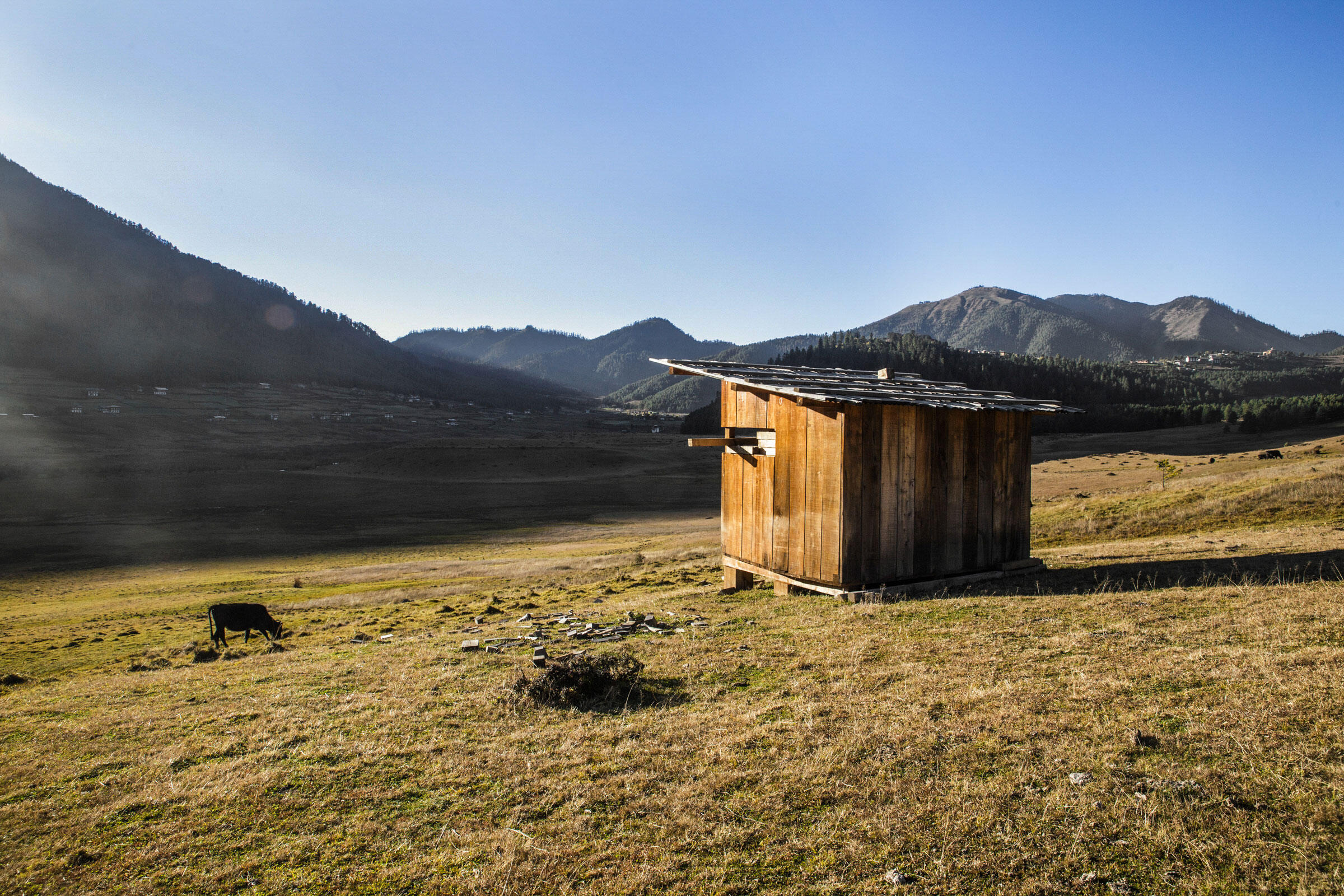 An observation box located opposite the RSPN information center. The box allows staff to closely observe the cranes without disturbing the birds. Photo: Ambika Singh 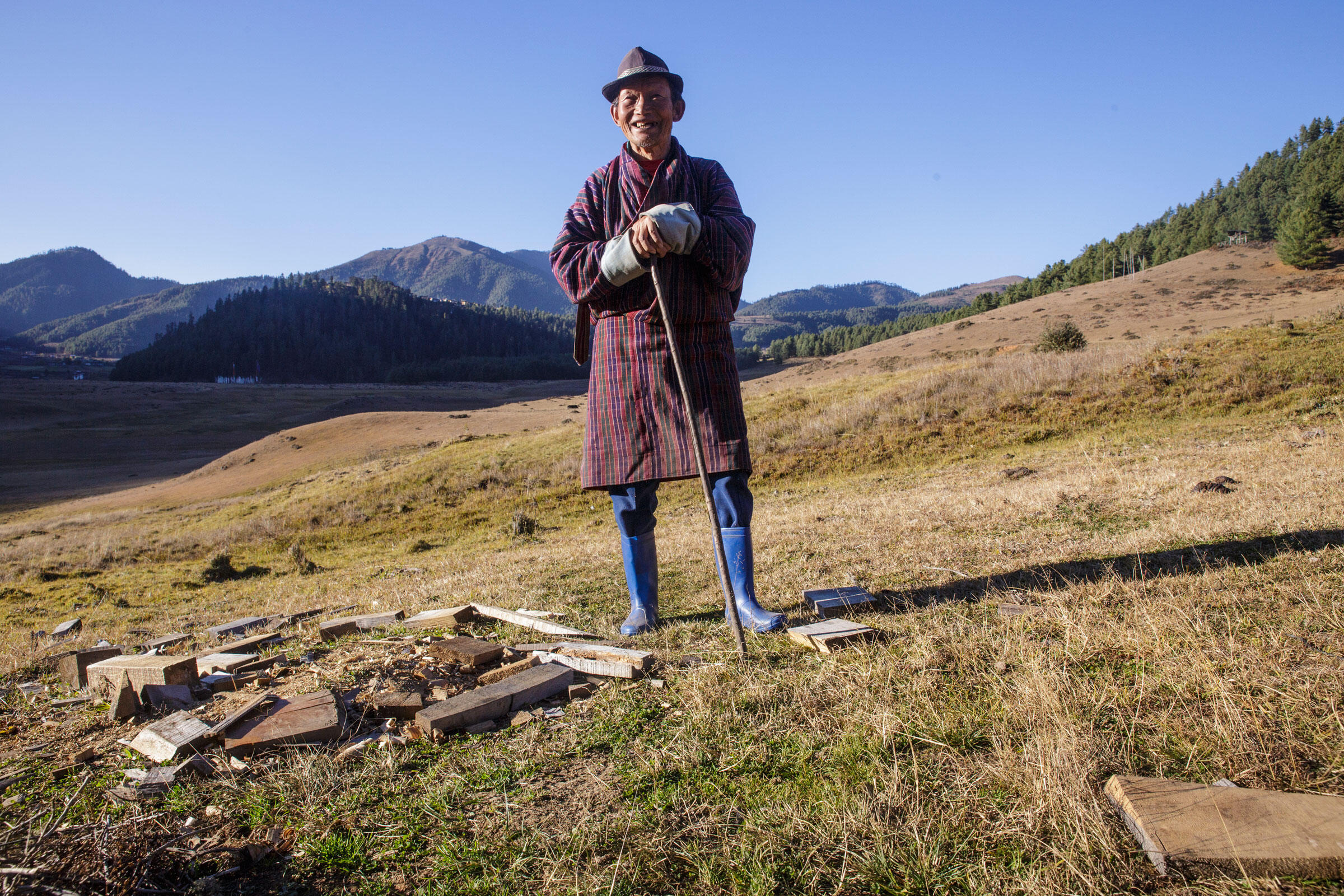 A local cowherd in front of an observation box. He told us that the cranes always seem to know the difference between the locals and foreigners, and that each smelled different. Which is why we had to be in the box. Photo: Ambika Singh 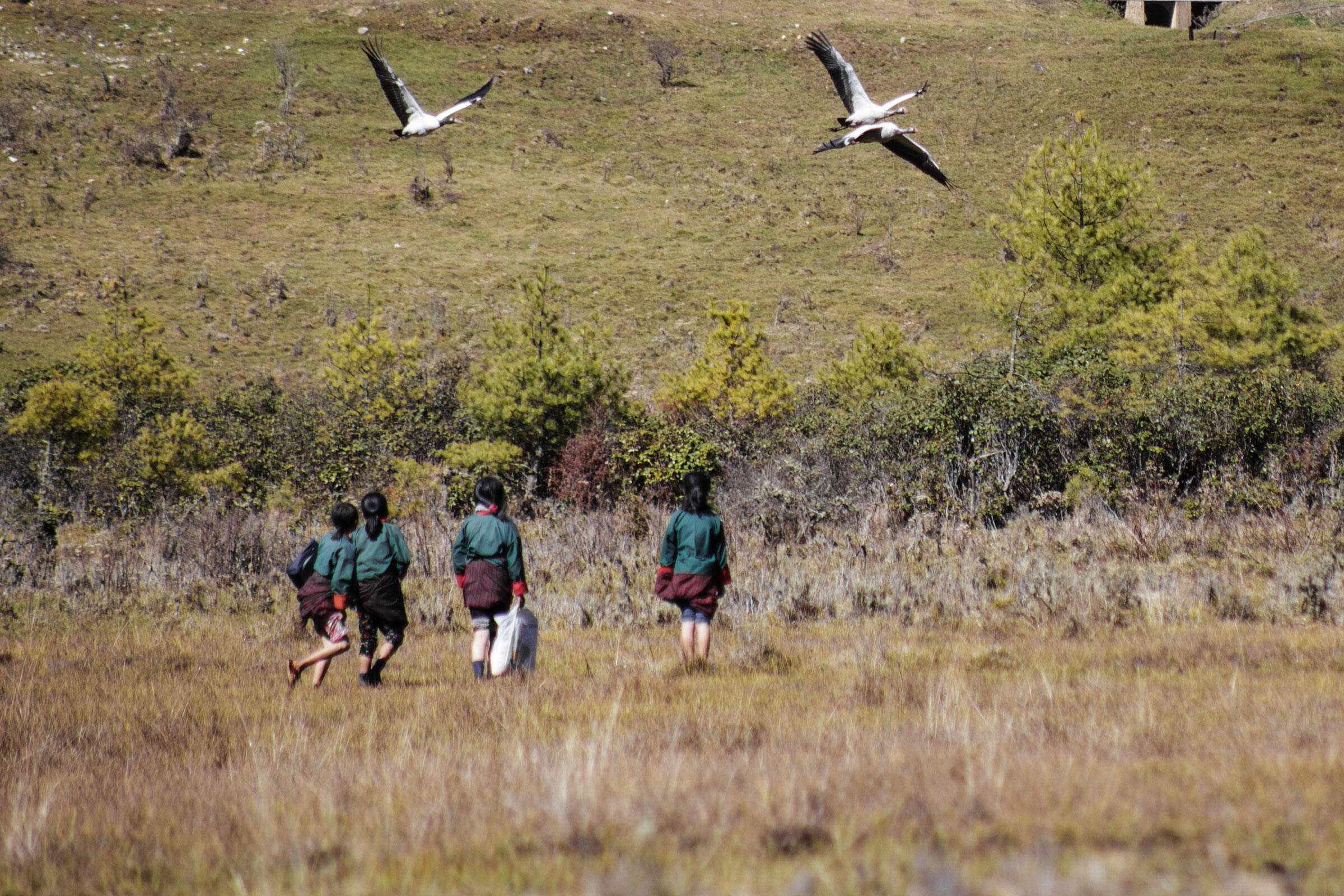 Local schoolchildren on their way home pass through one of the smaller roosting areas. These wetlands are not part of the main feeding ground and represent the maximum amount of interaction between the locals and birds. Photo: Ambika Singh 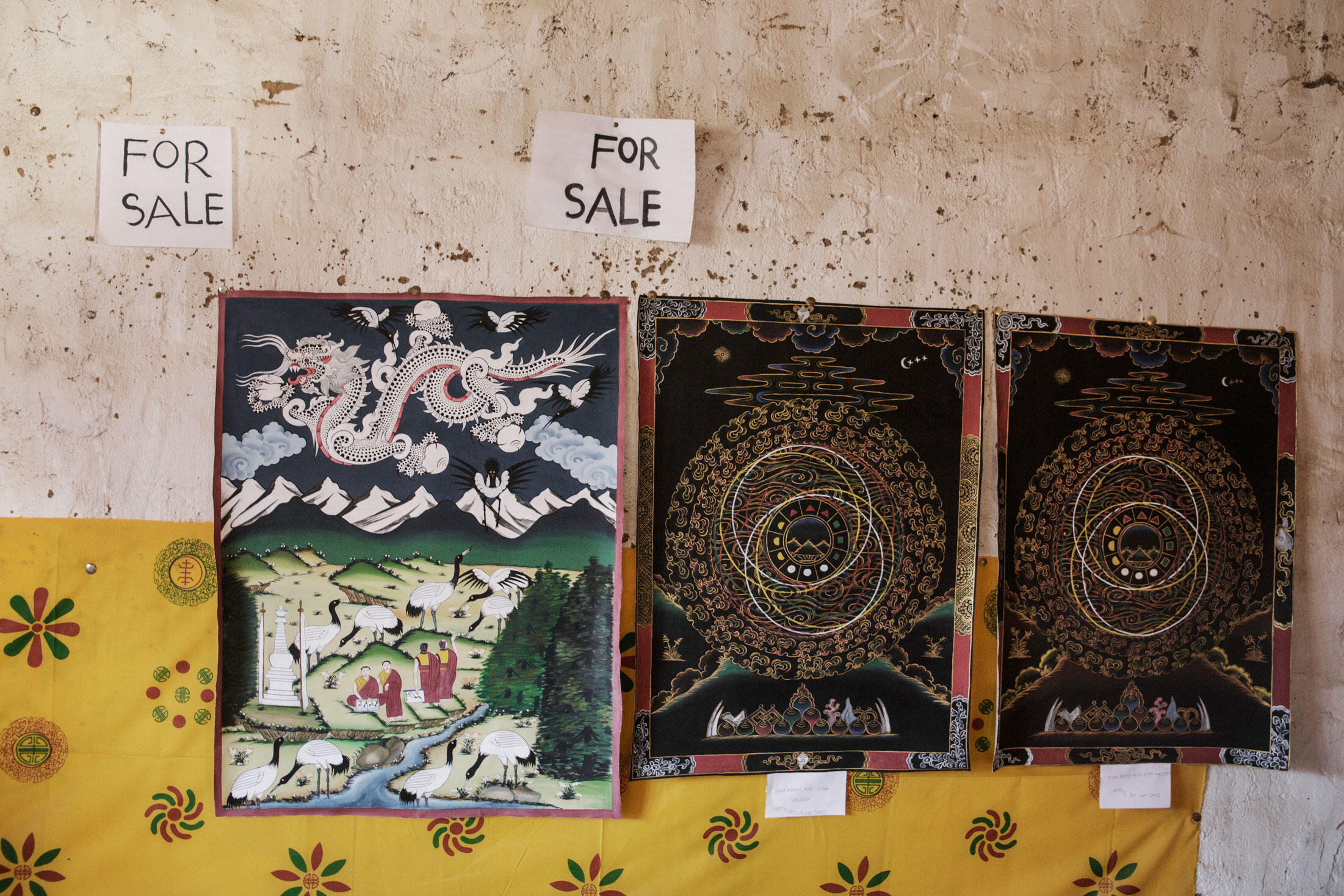 Artwork made by the resident monks for sale at the Gangtey Dzong. Photo: Ambika Singh

It’s also become an ecotourism destination. Since 1998 the RSPN has teamed up with monks to hold a crane festival each November in the courtyard of the ancient Gangtey Monastery, which is perched on a mountainside overlooking the windswept valley. At last year’s celebration tourists were treated to traditional cham dances in which performers wore ornately carved masks representing a variety of forest deities, and local grade-school students dressed in black-and-white costumes imitated the graceful movements of the cranes.

For Yangka, a potato farmer and father of four children from the village of Gangtey, the crane initiative has been a windfall. He received a $300 grant to add indoor plumbing to his modest house, which has allowed him to offer homestays to birders and other ecotourists. Guests pay about $30 a night—a considerable profit in a nation where the annual family income in rural areas hovers just above $200. Yangka and his family are one of around 20 who have received the funds, which came from Japanese environmentalists and were administered through RSPN. Many of his neighbors, he says through a translator, had seen similar benefits from the RSPN. “We are well compensated.”

Yangka says he’s thankful for the efforts of RSPN and its partners. The limitations on development in the valley have kept hotels at bay, he says, protecting the additional income he’s begun earning and reducing potential destruction of the sacred bird’s habitat. “People come here from all over to see the crane.," he says. "When they come, it makes me very happy—if they didn’t show up, I would be concerned.”

This past year there was plenty to be happy about. Some 400 tourists attended the festival. And while the birds arrived later than usual, they made it in time for the celebration. As the festivities came to a close at the monastery, three dozen cranes soared far below, flying over a pristine wetland. 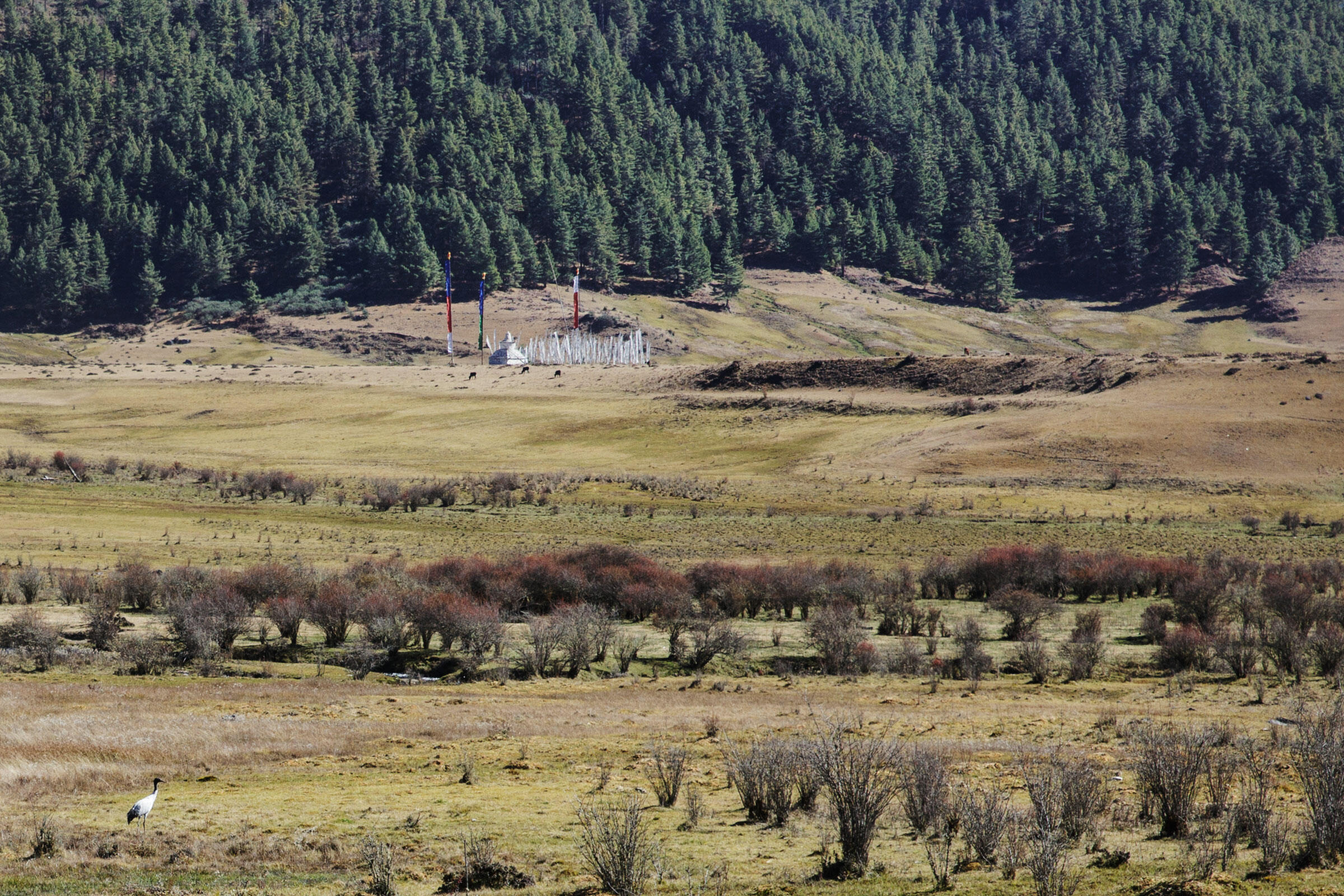 A Black-necked Crane stands alone while in the distance prayer flags surround a chorten, a type of Buddhist religious monument. Photo: Ambika Singh