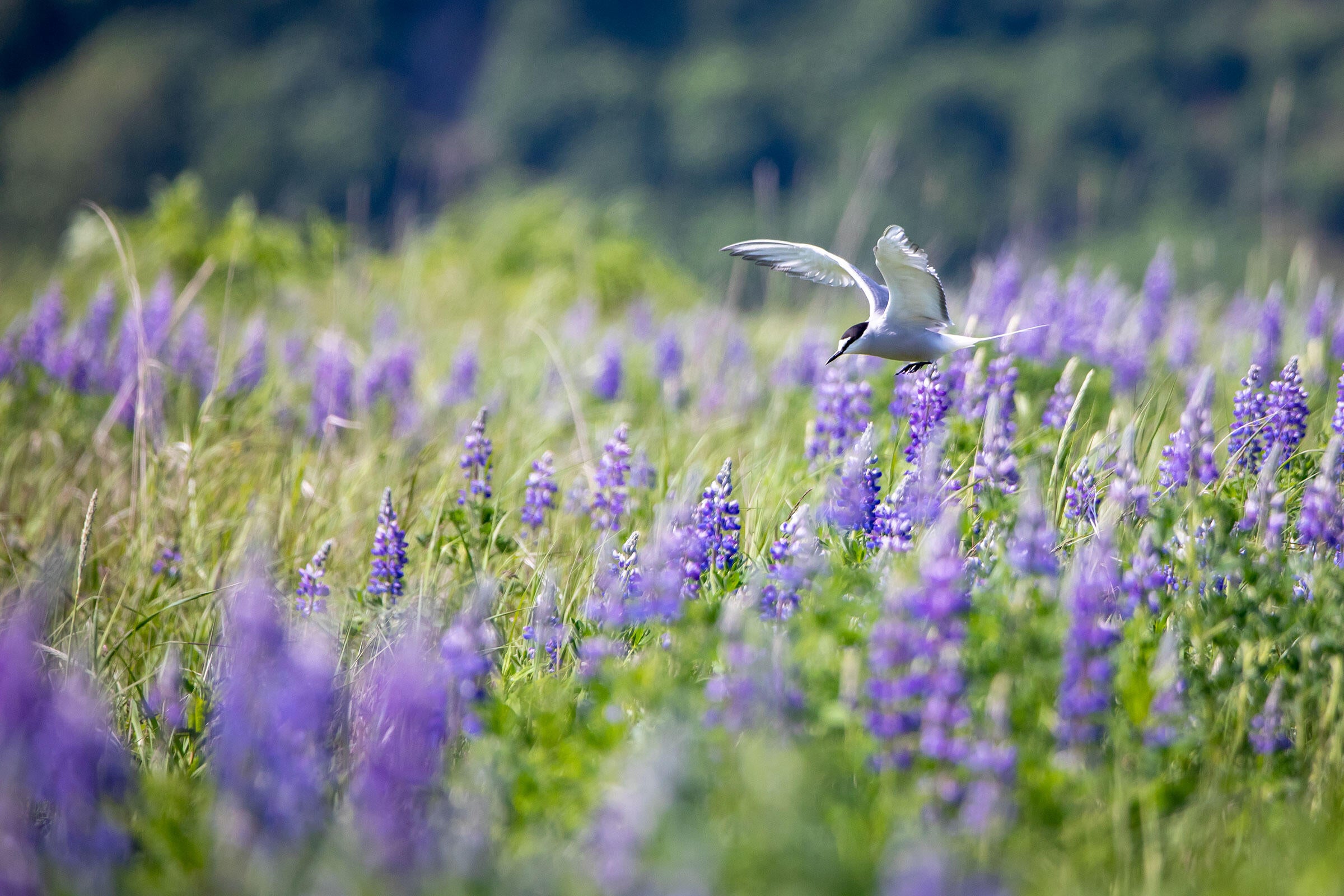 Scientists Are Racing to Understand the Aleutian Tern’s Mysterious Decline

U.S. populations of the seabird have crashed in the past half century. Researchers hope an upcoming series of surveys will reveal how dire the situation is—and if the bird should be considered endangered.

One of Alaska’s lesser known seabirds, the Aleutian Tern might also be one of its most threatened. Black-capped with a striking eye stripe, the small bird inhabits eastern Russia and much of the Alaskan coast, but its U.S. population has declined by more than 80 percent in the past few decades, raising concerns for the tern's continued survival. Now, a group of biologists has launched an ambitious plan to methodically count every Aleutian Tern in Alaska in a race to understand what’s causing the bird’s decline.

“It’s one of the seabirds I’m most concerned about,” says Heather Renner, a seabird biologist with the U.S. Fish and Wildlife Service’s Alaska Maritime National Wildlife Refuge. “We have some big red flags regarding their population status.”

Aleutian Terns nest in dispersed colonies along the coast and on scattered, remote islands. In 2015, research led by Renner indicated that the Aleutian Tern population in Alaska was crashing, and that 25 percent of known colonies had seemingly vanished. The cause of the decline was a mystery. But the available data—collected sporadically over decades by several agencies, using various methods—made it unclear how dire the situation is. “We can’t go back and make the old data better,” Renner says. “But observations we have point us to something dramatic.”

In the wake of the alarming results, the Alaska Department of Fish and Game listed Aleutian Terns as a Species of Greatest Conservation Need and the International Union for the Conservation of Nature updated the bird’s status from Least Concern to Vulnerable in 2017. Although biologists began reviewing available data from Aleutian Terns in Alaska in 2007, Renner’s work jumpstarted a more formal group of biologists at federal, state, and NGO agencies. The group compiled a list of lingering unknowns about the terns and brainstormed the possible stressors contributing to their decline. Through sharing data and resources—and with funding support from the National Fish and Wildlife Federation—they hatched an ambitious action plan to intensively study the elusive bird.

The first step in the group’s plan: count all the Aleutian Terns in Alaska and compare that to the historic data they do have. The secretive nature of the birds combined with Alaska’s size and the remoteness of their breeding colonies make them especially difficult to study. “It’s an understatement to say studying Aleutian Terns is challenging,” says Michael Goldstein, a wildlife ecologist with the U.S. Department of Agriculture and a member of the Aleutian Tern working group. For example, reaching Black Sand Spit, located on the northeastern coast of the Gulf of Alaska and one of the state's largest Aleutian Tern colonies, requires a long drive down unkept dirt roads, a rough skiff ride, and several miles of walking on loose sand to even count the birds.

Because Black Sand Spit is relatively accessible, it’s one of the few colonies where researchers have good data to see a trend. Susan Oehlers, a biologist with the U.S. Forest Service, has monitored this colony for the past 20 years—long enough to notice a decline. “In general, there’s fewer numbers,” Oehlers says. In the 1980s, biologists counted 3,000 Aleutian Terns on Black Sand Spit, but in 2020, the count dropped to approximately 1,100 individuals. And in 2021, Oehlers and her crew counted only 242 terns. But the biologists aren’t certain if the terns have died off, or are just relocating to unknown colonies.

The group’s key tool for counting each Aleutian Tern will be a statewide survey in 2023 and 2024.

The group’s key tool for counting each Aleutian Tern will be a series of statewide surveys in 2023 and 2024, using planes to cover swaths of the coast where the birds prefer to nest. These surveys could help them locate previously unknown colonies. While they won’t be flying the entire 46,000 miles of the Alaskan shoreline, they will be surveying most of that, an immense task for the team to tackle. “It’s a huge undertaking,” Oehlers says.

This summer, pilots flew 1,800 miles of the rugged Alaskan coast as a trial run. Observers armed with binoculars methodically scanned the ground for the white specks indicating terns, identifying 36 colonies. These aerial surveys are the best way to cover a large stretch of Alaska efficiently, but they have one big disadvantage: Aleutian Terns commonly nest with Arctic Terns, and distinguishing the birds from the air is nearly impossible—species couldn’t be confirmed at half of those 36 colonies. On the ground, ID is fairly easy: Arctics have stubby red legs and a bright red bill, whereas Aleutians have a black bill and black legs. So biologists will try to visit any colony they detect to determine if they are Arctics, Aleutians, or a mix. 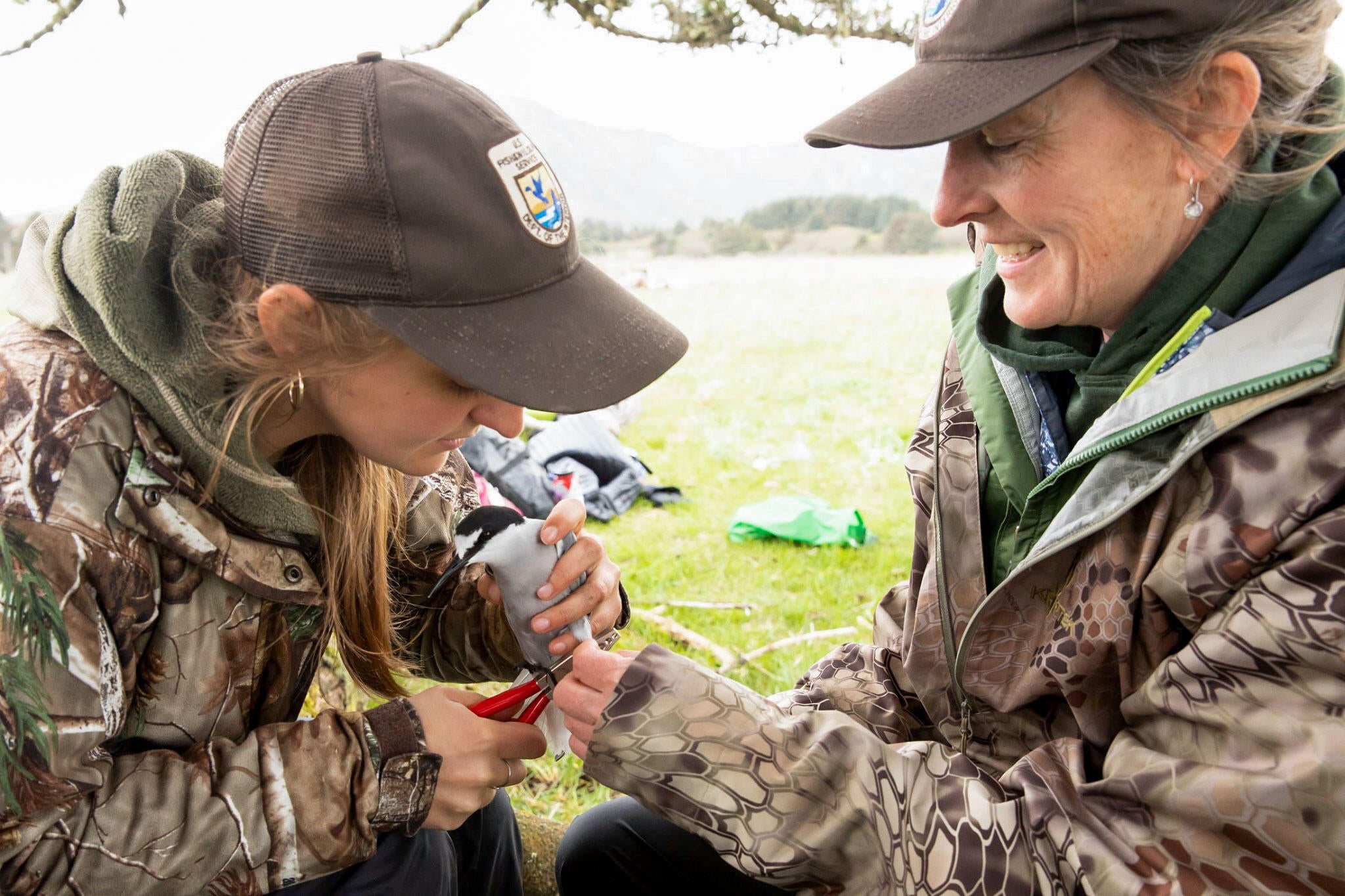 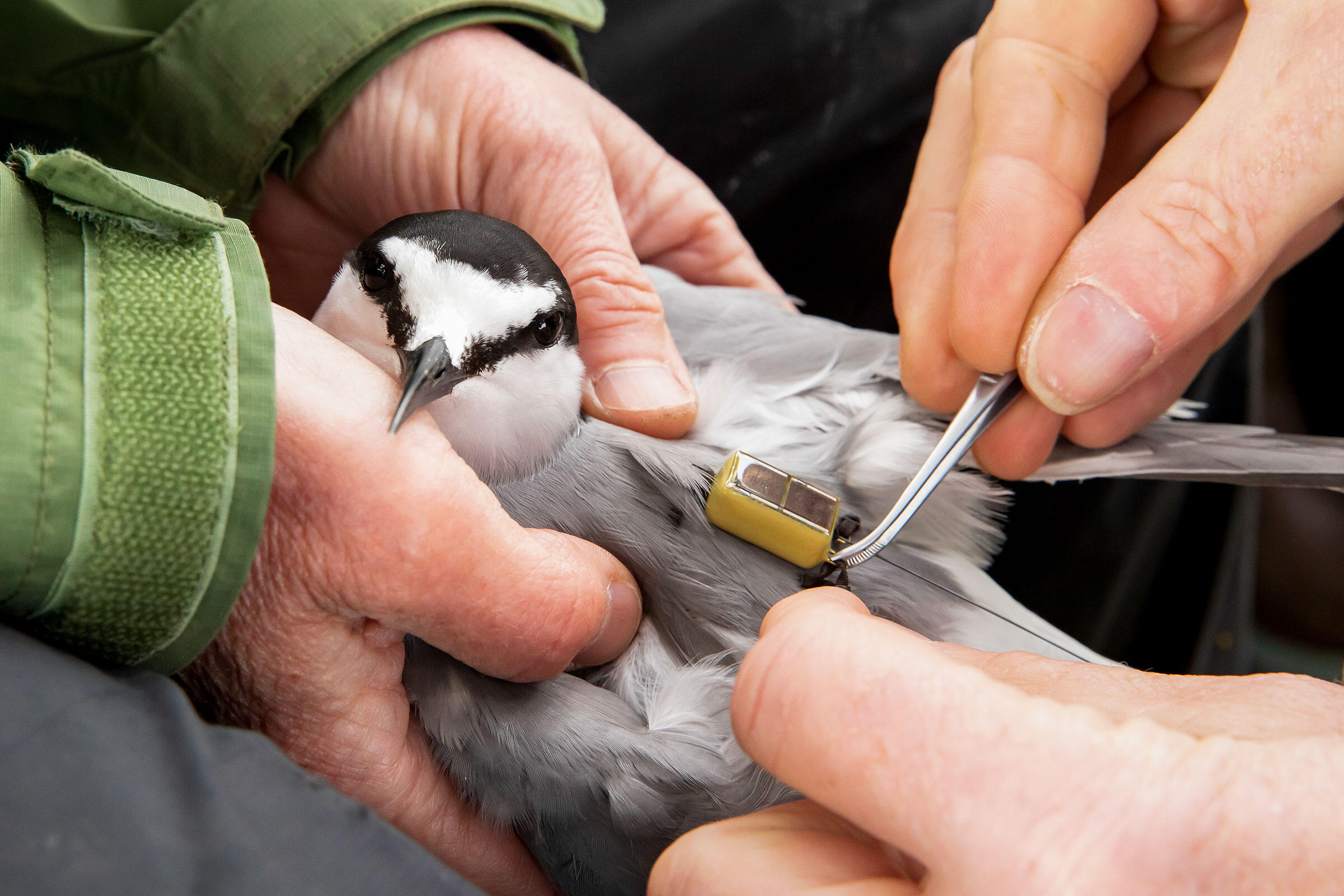 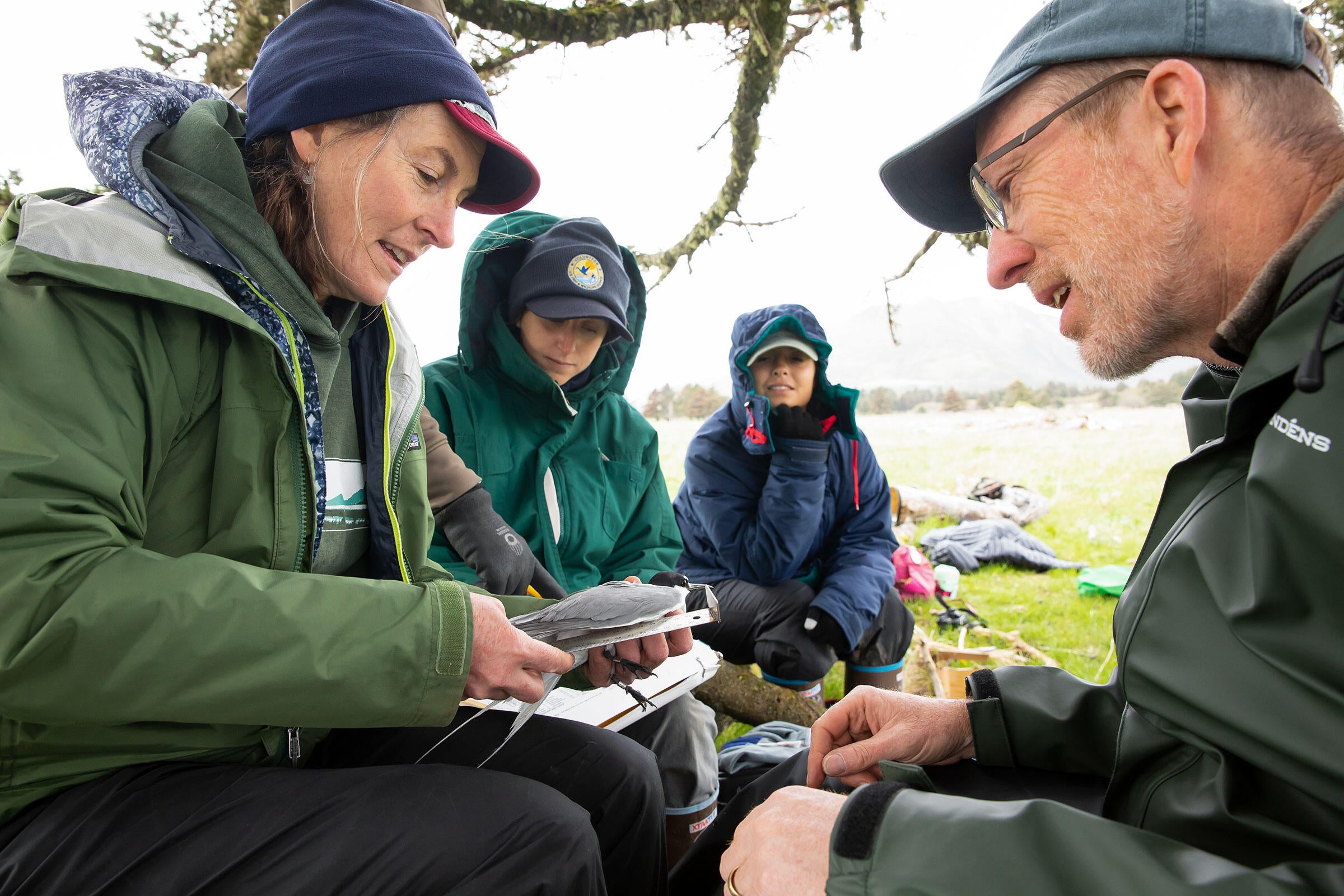 If the statewide surveys do reveal a drastically shrinking population, the next step is to identify the cause. “A single factor has a hard time explaining decline at that scale,” says Don Lyons, the conservation science director for Audubon’s Seabird Institute, who is also a part of the tern working group. Biologists rattle off a list of possible causes, including pollution, predators, prey availability, habitat changes, subsistence egging, and climate change. Lyons suspects that subsistence egging by Native Alaskans is the least of the Aleutian Tern’s issues; the tern eggs are small and less easily accessed, so murre and gull eggs make up a much larger proportion of the annual egg harvest.

Crossing another factor off the list, Robin Corcoran, a seabird biologist at U.S. Fish and Wildlife Service’s Kodiak Island National Wildlife Refuge, says the terns have plenty of available habitat. But occasionally the birds nest in grazing pastures or too close to the high-tide line, leading to nest failures. “Sometimes you scratch your head and wonder, ‘what are you thinking?’” Corcoran says.

Predators could be a factor: Ravens, Bald Eagles, coyotes, red foxes, and bears steal eggs from colonies, and Bald Eagle numbers have soared to more than 100,000 birds in Alaska. Colony abandonment and breeding failures often occur after a large predation event. “But I don’t think that’s the big global cause,” Renner says.

Food—a lack of high-quality prey, specifically—could be a big contributor to the birds’ decline. As a graduate student at Oregon State University, Jill Tengeres studied what affects the species’ nest survival. “They’re not giving up their secrets very easily, but we’re finding ways to learn more about them, so we can help them,” Tengeres says. On Kodiak Island, she could drive to five colonies, offering a unique opportunity to monitor almost 150 nests over four summers. She set up motion-sensing cameras in front of nests, to spy on the birds with minimal disturbance. Tengeres’ results suggest that a shift in the available prey could be a big factor. The sparse historical data on Aleutian Tern diet suggest that parents fed chicks nutritious capelin in the past. Capelin, a cold-water-loving fish, drastically declined after a regime shift in the Gulf of Alaska in the late 1970s. Now, the birds deliver Pacific sandlance and greenling, perhaps poorer quality items. “If they fledge one chick, it’s basically a miracle,” Tengeres says.

Climate change is likely affecting ocean productivity and available food. Reports point to a struggling marine environment as the cause of a decline of other Alaskan seabirds. “Seeing what has happened with other fish-eating predators suggests that there have been real changes in marine food webs,” Lyons says. But biologists need more data to connect the dots between the declining population and prey. Surveys of the fish community would be essential, though costly and time-intensive to broadly sample the ocean and bays of Alaska. Most surveys focus on commercial fish, often different and much larger species than what terns feed to their tiny chicks.

Outside Alaska, potential threats to the species are relatively unknown. A decade ago, geolocators—light-sensing loggers that estimate the location of a bird, like a low-tech GPS—deployed on Aleutian Terns confirmed reports that they migrate almost 20,000 miles from Alaska to oceanic wintering grounds in the Philippines and Indonesia. Unlike other species, these terns don’t overwinter in large groups, challenging biologists to pinpoint threats along their migratory route.

Another wrinkle in understanding the tern’s global status: In addition to the Alaskan population, currently estimated at approximately 5,500 birds, an additional 25,000 individuals—more than 80 percent of the global Aleutian Tern population—breed in Russia, where biologists in Russia have reported a stable Aleutian Tern population. But counts at the largest colonies in the world by Renner and Russian biologists in 2018 revealed the lowest numbers ever, suggesting this decline may not be limited to Alaska.

However, until they collect more data, biologists can only speculate on the population status and the cause of the bird’s falling numbers. “But if the decline is real, the Aleutian Tern belongs on the endangered species list,” Tengeres says. “The next couple of years will be really big for determining if they qualify for listing.”

In recent decades, the Tufted Puffin and Kittlitz’s Murrelet in Alaska both have suffered severe declines and were petitioned for adding them to the Endangered Species list. But Lyons says that Aleutian Terns have experienced a greater decline than either species, making it perhaps Alaska’s most imperiled seabird. Once the statewide surveys are complete, scientists will have a much better sense if that's the case—and if it is, the work to save the Aleutian Tern may just be starting.