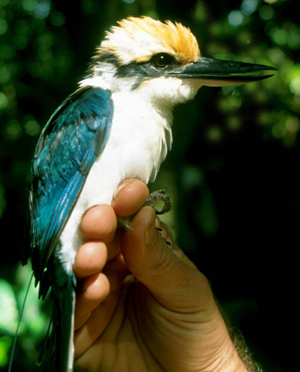 The Micronesian kingfisher is one Guam’s native species of birds that was eliminated by alien brown tree snakes. Photo: By Dylan Kesler/ CC BY-SA 3.0

Guam might just be an arachnophobe’s worst nightmare. After brown tree snakes devoured most of the island’s native species of birds, spiders have become more abundant on the tourist-friendly island.

Researchers from Rice University, the University of Washington, and the University of Guam examined the number of spider webs in the island’s forests and found that there were up to 40 times more spiders in Guam than in neighboring countries. Rota, Tinia and Saipan, the three other Micronesian islands observed in the study, have similar bird communities, but no well-established populations of brown tree snakes.

"You can't walk through the jungles on Guam without a stick in your hand to knock down the spiderwebs," said Haldre Rogers, a Huxley Fellow in Ecology and Evolutionary Biology at Rice and the lead author of the study, in a press release.

The highly invasive snakes, which were introduced to Guam by accident in the 1940s, wiped out 10 of the 12 native bird species, according to the study. Although there is no conclusive research, the biologists linked the absence of the predatory birds to the growth of the spider populations. Fewer birds mean fewer predators for the spiders and less competition for prey.

The study is one of the first to examine the effect of the loss of a prey on an entire ecosystem. The researchers also plan to study the effect on plants.

“We’ve known for some time that the introduction of the invasive brown tree snake was a disaster for the island’s native bird populations; now we are learning about some of the consequences of that loss of avian diversity,” said Dr. George Fenwick, President of American Bird Conservancy in a statement. “This study clearly illustrates the valuable function that birds provide in controlling invertebrate numbers, and the natural balance that birds bring to our environment. Birds pollinate our crops, control crop pests, and, it would seem, keep spider populations from exploding.”