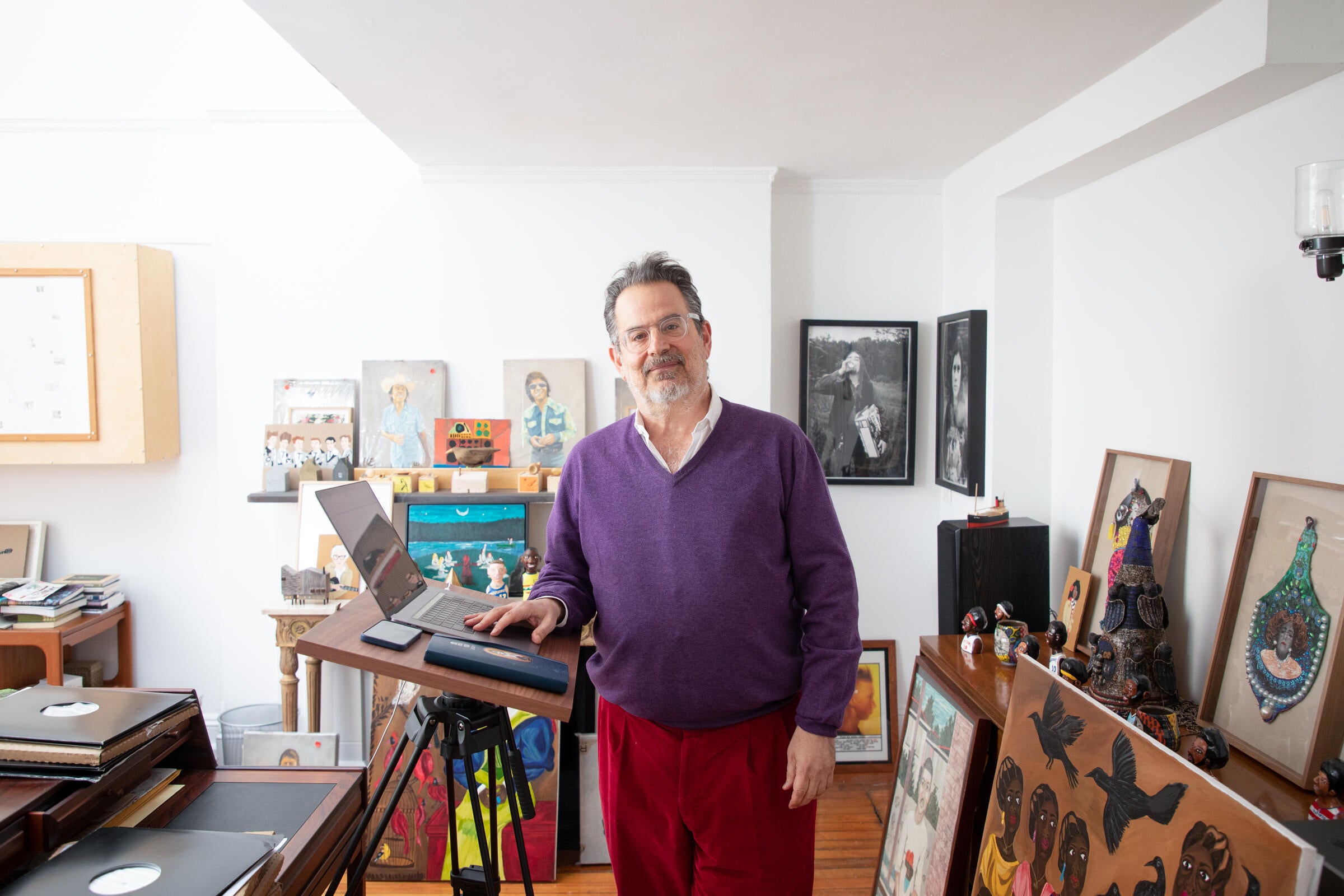 Randall Poster, a sought-after film and TV music supervisor and producer of “For the Birds: The Birdsong Project,” in his Manhattan office. Photo: Luke Franke/Audubon

The man behind your favorite film soundtracks wants to build a joyful movement around bird conservation. On ‘For the Birds: The Birdsong Project,’ he’s enlisted musical legends and silver-screen icons to help.

Randall Poster is Hollywood’s man with the golden ear, a renowned matchmaker of sound and image. When a filmmaker wants a soundtrack to create a certain mood or needs just the right tune to lend a scene punch or poignancy, Poster’s phone rings.

His list of credits as a music supervisor, starting with the 1995 indie film Kids, is staggering. Perhaps best known for developing the critically adored soundtracks for Wes Anderson’s films since 1998’s Rushmore, Poster has shaped the sound of blockbusters (No Time to Die), hit comedies (Zoolander), indie gems (The Squid and the Whale), and streaming sensations (Tiger King; The Queen’s Gambit). “A music supervisor is the person who helps a director imagine and then execute a musical vision for the film,” he explains. He’s worked with many of today’s best—Kathryn Bigelow, Todd Haynes, Martin Scorsese, and more—and won a pair of Grammys along the way.

So when a hush descended over the world in 2020, Poster’s ear picked up a different kind of music that had been there all along. Checking in with locked-down friends, he learned he wasn’t alone. “We were all talking like, ‘Are you hearing all these birds?’” he says.

A New York City native, Poster had never paid much attention to his avian neighbors. (“I was more of a squirrel person.”) Like so many others, he welcomed this new distraction from the day’s bleak headlines. He found out that, despite appearances, his hometown supports a rich variety of resident and migrating species. But he also learned about dramatic declines in bird populations and how climate change and habitat loss threaten many of them with extinction.

Poster decided to do something about it. He discussed his desire to help with his friend, activist and producer Rebecca Reagan, and together they dreamed up the idea for a collection of original compositions inspired by birdsong, one that would reach new audiences to support conservation. He started calling up musicians to gauge their interest in contributing. “I had no idea what the response would be,” he says. As it turned out, many performers, their tours scrapped by COVID-19, were stuck at home with time on their hands and birdsong pouring through their windows. Audio files started trickling, then pouring into Poster’s inbox. “The artists’ commitment to this is beautiful,” he says. “I have a different favorite song every third day, or based on whatever mood I’m in.”

What began as a loose idea for a musical benefit project has blossomed into something far more ambitious: For the Birds: The Birdsong Project. At its heart are 172 new pieces of music created by some of the world’s most celebrated songwriters and performers, interspersed with avian-themed verse written by major poets and read by A-list actors and artists. The first volume of music and poetry is available for streaming, with additional releases monthly throughout the summer. A limited-edition box set of 20 LPs will follow in November, featuring original artwork and a 60-page book of essays and companion materials. 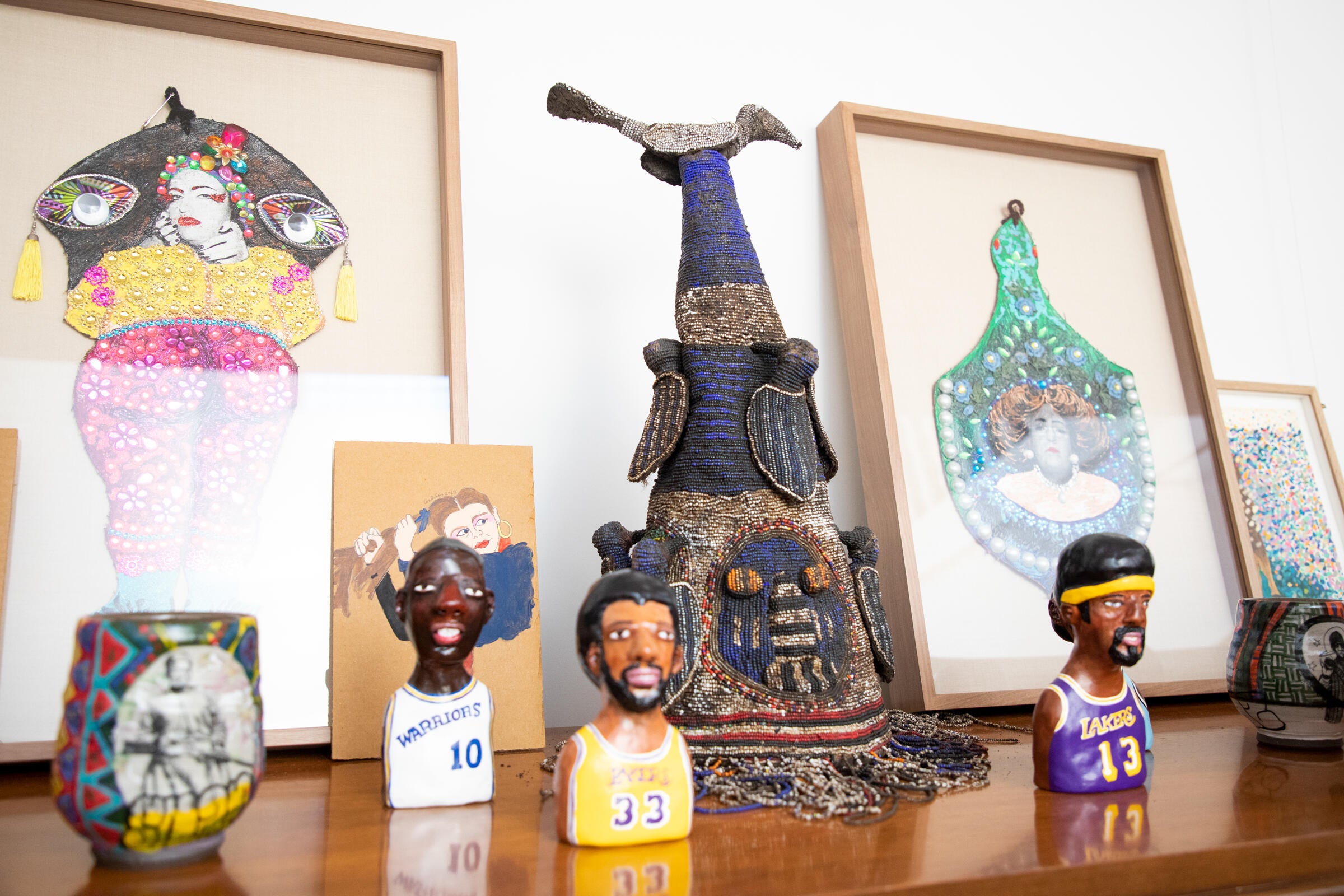 Poster is an avid collector and, since developing an interest in birds in the pandemic’s early days, has started amassing various avian-themed artwork, such as this beaded hat. Photo: Luke Franke/Audubon 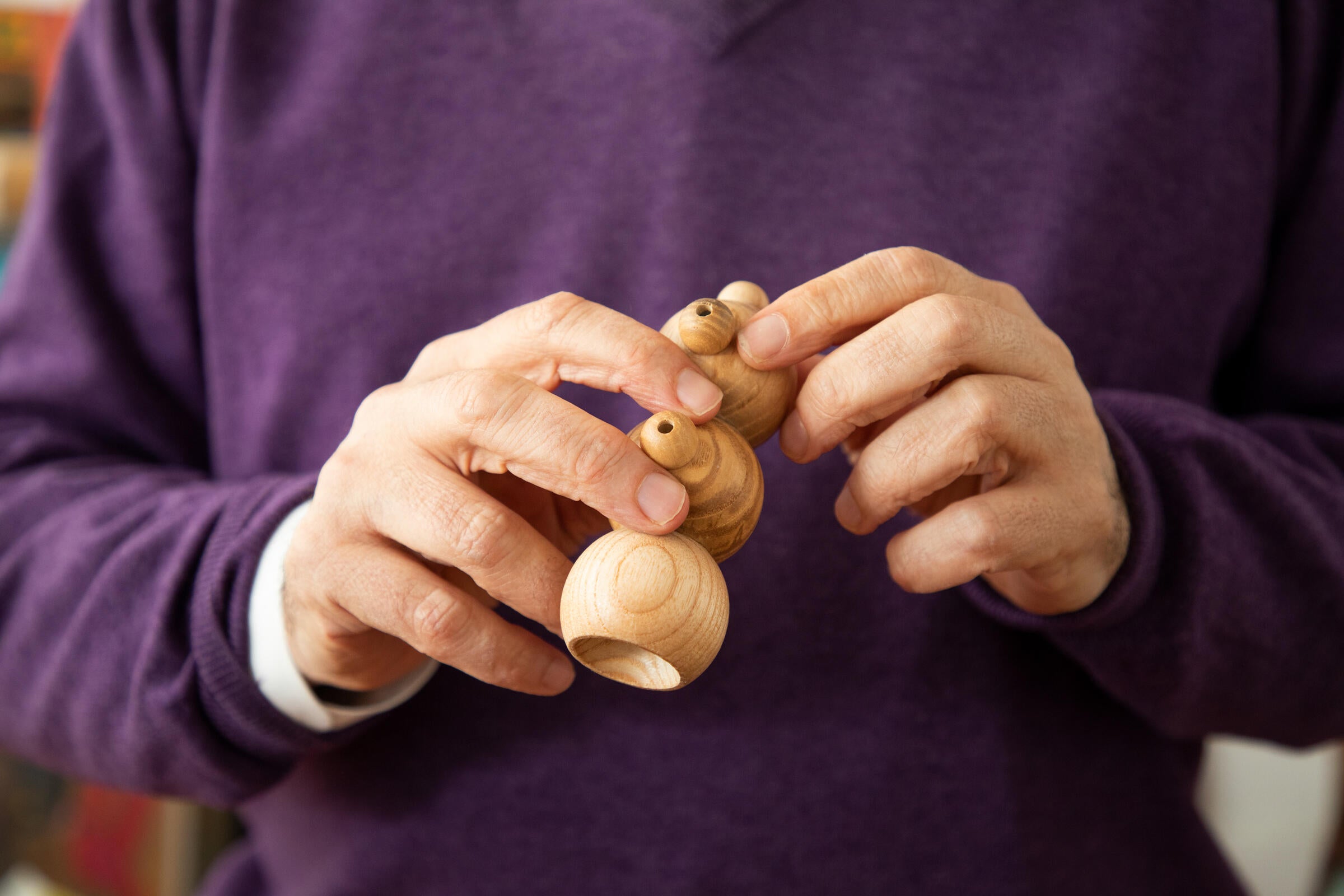 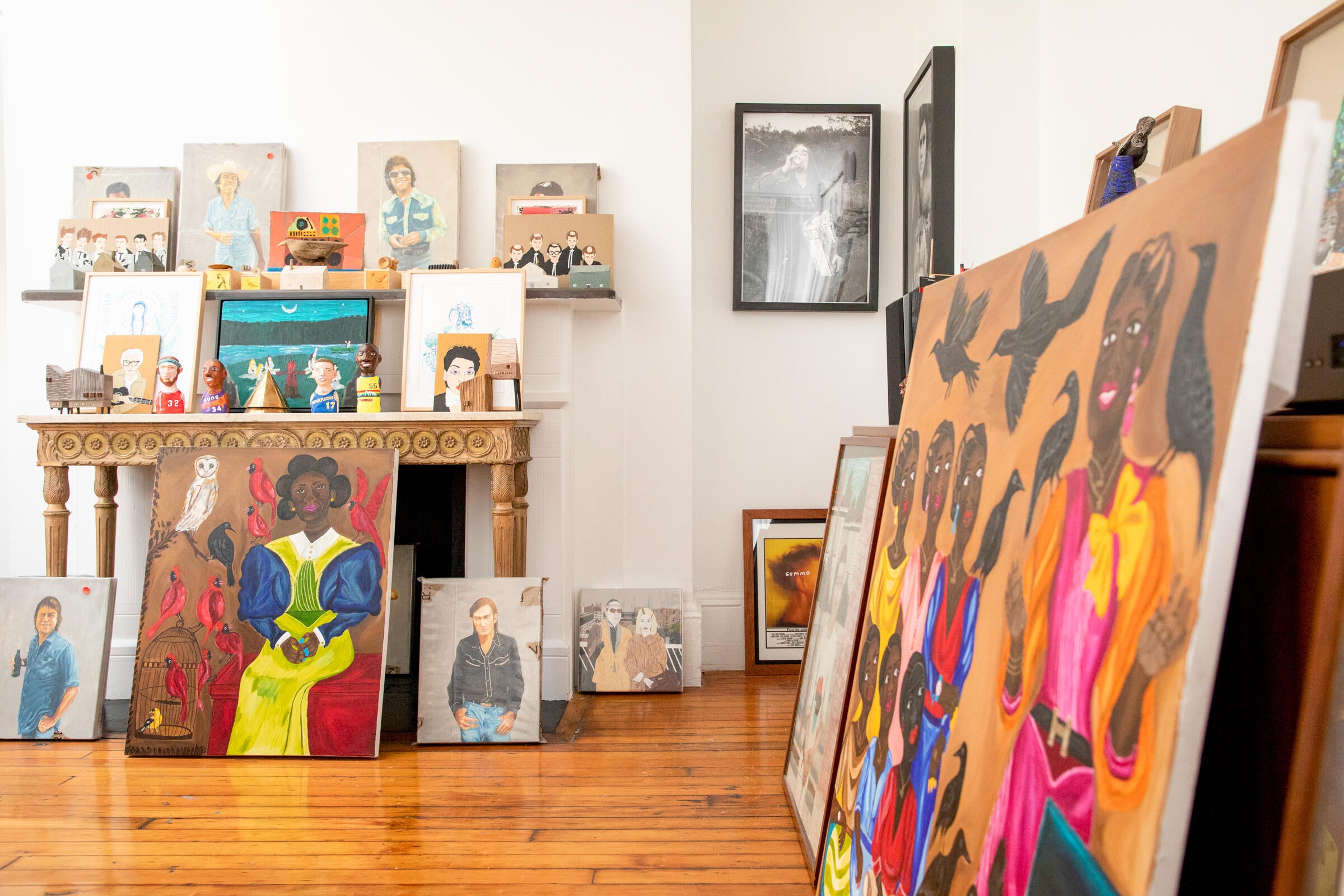 Poster’s art collection is increasingly filled with bird-themed paintings to complement portraits of musicians and other works. Photo: Luke Franke/Audubon 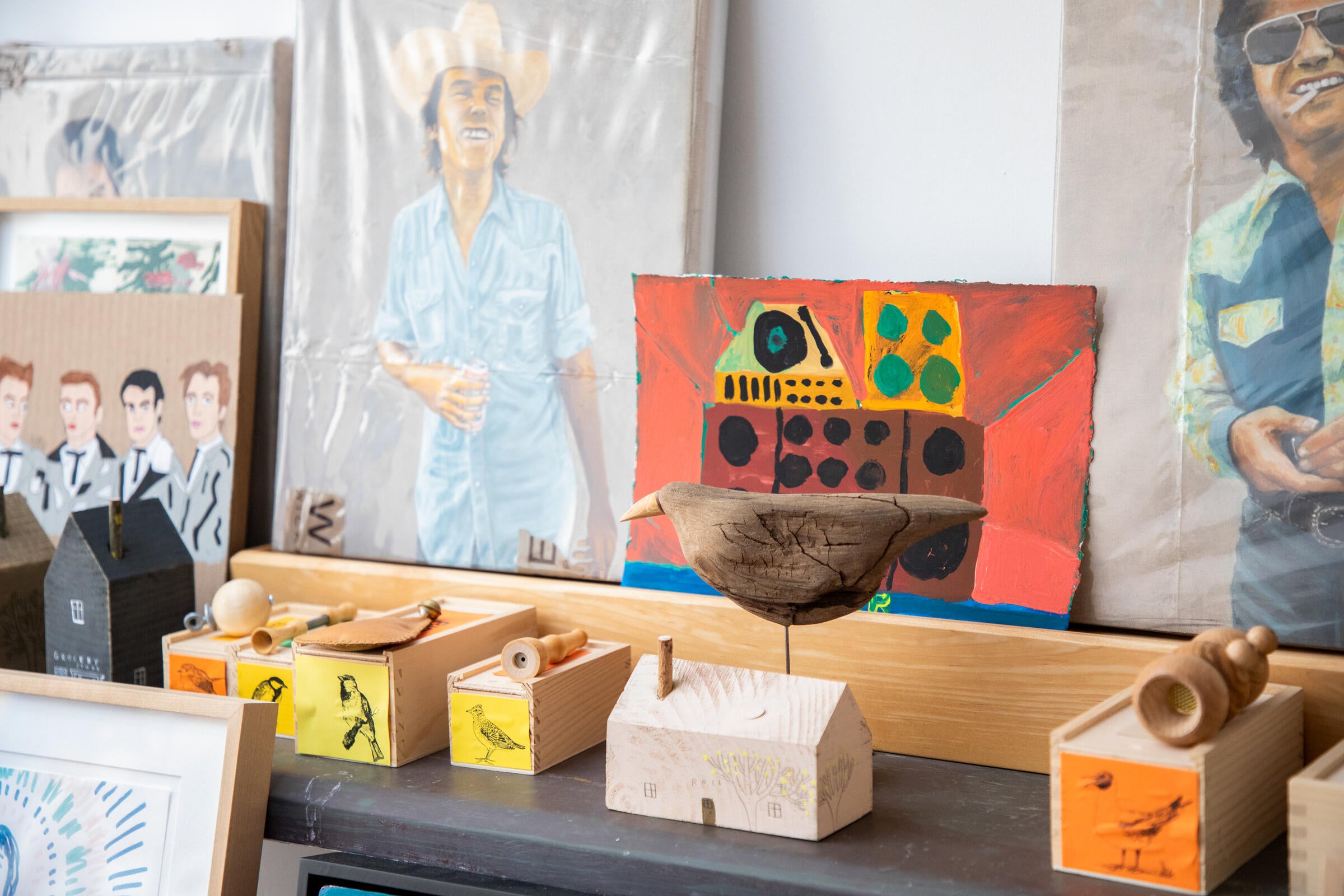 Bird calls and a wood block carving of a bird adorn the art collection in Poster’s office. Photo: Luke Franke/Audubon

In addition to the recordings, Poster and partners have also arranged a series of art exhibitions and live performances, all intended to build community and joy around the notion of celebrating and protecting birds. The National Audubon Society, which Poster contacted in the project’s early stages due to its conservation focus, will benefit from all proceeds.

“I think people in this moment want to be connected, want to be pursuing some higher purpose, and not be solitary in that pursuit,” Poster says. “And I think we’re going to make a big impact.”

The collection certainly has the star power to make a splash.

One of Poster’s first calls was to Jonathan Meiburg, an ornithologist and leader of the indie rock band Shearwater. Along with an original song, Meiburg—author of an acclaimed book on a genus of birds called caracaras—contributed an essay exploring connections between human and avian music. “Birds make all kinds of sounds. They cackle and shriek and whirr. They make sounds lower than you can hear. They make sounds only children can hear,” he tells Audubon. “They’re musicians like we are.”

The tracks are also varied in how each artist approached Poster’s anything-goes assignment of making music inspired by birds. Shearwater’s contribution, a meditative ambient piece called “Kwitaro Backbone,” incorporates field recordings Meiburg made at a place of the same name, a sandbank overlooking a river in Guyana, while researching his book. “A few mornings spent really listening to the dawn chorus there make you feel like human music is really primitive,” he says.

Several other artists also wove recorded birdsong into their pieces, and ear-birding aficionados will enjoy trying to decipher where each track was made based on its background species. Elsewhere, the line between human and avian sounds blurs. Listening to “Rare Birds” by Andrew Bird (yes), you might think you’re hearing a recording of the Kauaʻi ʻŌʻō, which the federal government declared extinct last year. But in fact it’s Bird imitating the vanished nectar-eater, along with the Mourning Dove and American Robin, with his trademark whistling—a skill he’s honed since childhood by playing call-and-response games with species he encounters. “I’ve always had a relationship with birdsong,” he says. “I could be just humoring myself that I’m actually interacting with them, but you try to see if you can pass off as one of their species.”

On other tracks, the influence of birdsong is more subtle. There are no field recordings or avian imitations on “Overview” by CUP, but the song is “very birdy” to its creators, says Yuka C. Honda, one half of the duo with her husband, the avant-garde guitarist and Wilco member Nels Cline. “Maybe we have our own language.” The song’s guitar harmonics and swells of synthesizer reflect the couple’s move, in the pandemic’s early days, from Brooklyn to a wild corner of upstate New York, where they were all but overwhelmed by what Honda calls a symphony of bird (and frog) sounds. “They bring a lot of abstract and experimental music into our world,” she says. “The birds made us really connected to this new life.”

You can hear a similar connection on “Hum Hum Hum” by Karen O. Known for her brash onstage persona, the Yeah Yeah Yeahs singer lets her guard down on this delicate ode to a hummingbird. “Without your kiss no foxglove springs,” she coos sweetly. “Without the joy your visits bring I’m lost.” It’s a sentiment that transports the listener back to those isolated days of early 2020, when the bright plumage of a backyard bird could feel like a priceless pop of color in a washed-out world.

The same spirit of gratitude inspired Poster to undertake the project. “I’m far from being any kind of expert on anything except putting music in movies and working with musicians,” he says. “So, for me, part of the joy in this has been my own growth and education.” Now, he hopes that through artistic expression others will be similarly moved to learn about birds and help them thrive despite the many challenges they face—that The Birdsong Project will awaken in more people the same tenderness that Karen O voices to her cherished hummingbird: “Let me be your flower.”