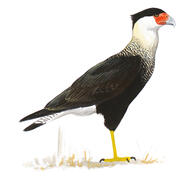 Indie rock musician Jonathan Meiburg didn’t initially travel to the Falkland Islands for the birds. It was 1997 and Meiburg, fresh on the heels of his college graduation, had received a year-long Watson Fellowship to study human communities in the world’s most remote places. But when he arrived at a collection of windswept, treeless islands in the far reaches of the archipelago, he was surprised to find a raptor that seemed as curious about him as he was about it: a Striated Caracara.

“I was walking through colonies of albatrosses and there are penguins everywhere, and whales and seals, and there are these magnificently weird caracaras running up to me and staring at me, like, ‘What are you?’” Meiburg told Audubon in a recent interview. The birds were playful and daring—unlike any bird of prey that he’d met before. “It's not an overstatement to say that I was hooked from that moment.”

If you’ve heard Meiburg’s name before, it's likely because he’s the lead singer of the band Shearwater, whose occasionally bird-themed albums have been praised by NPR and Pitchfork.  His latest project captures the same adoration for the natural world that’s expressed in his music: In A Most Remarkable Creature, Meiburg’s debut book released last month, he explores the hidden forces that gave rise to our world and the species we share it with. Abounding with intriguing characters and too-close-for-comfort wildlife encounters, the book is an enrapturing tale about the unfolding evolutionary drama of our planet.

A Most Remarkable Creature hinges on the charismatic genus of birds called caracaras, which are related to falcons but look more like a mash-up between a vulture and an eagle. The 10 surviving species of caracara inhabit the most varied and extreme corners of South and Central America, with some populations reaching into the southern United States. Most have yellow legs, striking black-and-white plumage, featherless red faces, and blueish-silver hooked beaks. They’re intrusive, bold, and will eat just about anything, from small mammals and turtle eggs to carrion. “The obvious questions when you meet them are, ‘What is this? Why is it like this? And what is it doing here?’” Meiburg says. “It turns out, those were the very same questions that Darwin had had about them.”

English naturalist Charles Darwin had encountered Striated Caracaras during his famed voyage on the HMS Beagle in the 1830s. He was intrigued by their inquisitive nature and penchant for pick-pocketing his crew. Darwin wondered how these birds had ended up on the remote Falkland Islands, and why they looked similar to scavenging birds he’d seen on the South American mainland—species now known as the Chimango Caracara and Southern Crested Caracara. Though he wasn't the first to collect a Striated Caracara, Darwin was the first to document the gregarious nature of the Falkland birds.

When Meiburg encountered the unusual raptors two centuries later and found that many of Darwin's original questions about the birds persisted, he took on the task of finally figuring out the caracara's place in the larger evolutionary puzzle. “I really did feel like these birds had said, ‘You!’” he says. “I don't know why, but this was the story that came to me for whatever reason.” Over the next two decades, Meiburg would trek to some of the most remote reaches of South America in an effort to better understand their story.

The most extraordinary thing about caracaras, says Meiburg, is their brain.

His four-part tale begins in the Falkland Islands when Meiburg and a team of scientists find the remains of male Striated Caracara named G7, and conclude he was likely killed by a Peregrine Falcon. Meiburg uses the bird's death to discuss the divergence between generalist and specialist species, highlighting the balance between specialized skills and malleability needed for survival. As Meiburg unravels the caracara's history, we follow him deep into the forests of Guyana to search for Red-throated Caracaras and ascend to the Andes in search of Mountain Caracaras. Meiburg weaves evolutionary history with tales of his adventures into remote regions, while incorporating the life and work of naturalist William Henry Hudson, who was among the first to write about the species. Hudson was struck by the caracaras as he watched them congregate like House Sparrows and scavenge like vultures, writing that they have “the habits of twenty diverse species.”

The most extraordinary thing about caracaras, says Meiburg, is their brain. “I had never met an animal that seemed so conscious,” he says. While other raptors have excelled as skilled hunters, caracaras have gotten by on their corvid-like intelligence and scrappy nature. In A Most Remarkable Creature, Meiburg describes teams of Andean Caracaras overturning rocks to find a meal, a captive Crested Caracara that can operate a vending machine, and a Striated Caracara that entertains itself with a piece of string. “They don't act the way a falcon is supposed to act, but that's what I love about them,” Meiburg says.

Though most caracara species are stable despite habitat loss, there are just 500 breeding pairs of Striated Caracaras left in the Falklands, and their island home is threatened by a changing climate and rising seas. But Meiburg believes the birds' opportunistic nature and ability to quickly adapt could be key to their survival. “They don't have an intelligence problem—they have a geography problem,” he says. Take for example, Meiburg says, how Striated Caracaras that have learned to forage for introduced earthworms when their usual meal of migratory seabirds is sparse. Ultimately, though, the fate of the species “might be on us to help out,” he says.

Meiburg's admiration for the species is clear throughout the book, and at times A Most Remarkable Creature reads like an extended, poetic love letter from one misunderstood being to another. “People are always confused by hybrid creatures,” says Meiburg, noting that his passion for music and for ornithology don’t exist in isolation. “The most exciting moments in playing music are moments of discovery, when something happens you weren't expecting that delights you,” he says, “and with birds, it's the same.”