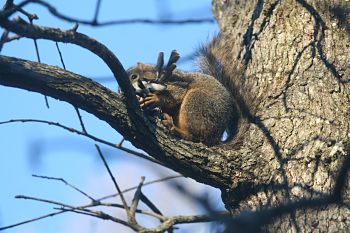 This past February marked a photographic first for Harold Hague: the shot above of a squirrel sinking its little rodent teeth into a bird. “He was munching away,” recalls Hague, a dental technician based in Tyler, Texas, “he ate about two-thirds of it and threw it down.” A self-professed camera nut, Hague maintains that this photo is “probably the most unusual one that I have” from sixty-some years of shooting.

The back-story, unfortunately, isn’t so unusual. Hague was reading at a table near a window in his house when the bird—Hague thinks it was a nuthatch—flew into the pane, knocking itself to the ground. The squirrel, perched about four feet away in a tree, apparently saw the collision and scurried over. It nudged the avian invalid, which jumped. Undeterred, the squirrel nudged the bird again and then “just grabbed it and took it up the tree and started eating it,” says Hague.
Although Sir Squirrel surely sealed its victim's fate, the window the bird flew into represents the culprit in what has become an insidious, global problem. A vast amount of evidence shows that clear and reflective sheet glass and plastic are the largest manmade threat to birds after habitat loss. A billion birds—at least—die annually from colliding with such material in the U.S. alone, and the toll worldwide is far greater.
The problem stems from the fact that birds don’t perceive glass (or transparent plastic--think sound walls) as a barrier (although, some birds such as city-dwelling pigeons seem more immune, likely because they’ve become accustomed to their environment). Enticed by the reflection of sky or nearby foliage in mirrorlike panes, or tricked by a transparent pane that looks like a way to vegetation inside a building, for example, birds fly into windows and knock themselves out—sometimes fatally. What’s more, glass is an indiscriminate killer, culling the weak and fittest alike.
So why aren’t some of us more aware of the problem? In part, because if we don’t hear the crash and if we don’t see the felled bird, it can be scavenged—say, by an opportunistic squirrel. And what’s out of sight is out of mind.
An ideal solution to the problem is a glass or window film (that can be applied to existing windows) that birds can see and humans can’t. Research done by Daniel Klem Jr., an ornithologist at the Acopian Center for Ornithology at Muhlenberg College who’s devoted much of his career to studying bird collisions, shows that a film of alternating ultra violet (UV) light-absorbing and UV-reflecting strips could work in deterring birds (they see in the UV spectrum, but humans don’t). Such a film isn’t currently commercially available, however. As for new windows—Isolar, a German company, does sell a product called Ornilux that incorporates UV coatings, but from what Klem knows about the properties and testing of its panes—he hasn’t been able to experiment with the glass himself—he says the product’s ability to deter bird collisions is questionable.
But don’t lose heart—before you paint your windows black, there are a few steps you can take to lesson the bird blows. The American Bird Conservancy just produced a flyer offering bird-safety tips. Also, check out some of the innovations mentioned in “Pain in the Glass,” from our November-December 2008 issue.
Klem recommends a number of tips as well in a recent paper presented at the Fourth Annual Partners in Flight conference, including the following:
1) Cover windows with netting.
2) Move bird feeders, watering areas, perches, and other attractants to within one meter or less of the glass surface.
3) Place decals on or hang strings of objects in front of windows such that they uniformly cover the surface and are separated by 10 cm (4 in) or less in vertical columns or 5 cm (2 in) or less in horizontal rows. (*Author’s note: In other words, one lonely decal isn’t enough of a warning sign. The idea is to produce a visual disturbance that signifies to birds, “Stop!”)
4) Use one-way films that consist of patterns and color shades acceptable to homeowner and commercial building manager; these films provide a minimally obstructed view from inside while rendering a window opaque or translucent when viewed from the outside.
5) Reduce the proportion of glass to other building materials in new construction.
6) Use ceramic frit glass with 0.32-cm diameter translucent appearing dots separated 0.32 cm apart in new or remodeling existing structures.
7) Angle windows 20 to 40 degrees from vertical in new or remodeled construction.
Some of these may not be the most aesthetically appealing solutions in the world, and okay, maybe there is some “nature in the raw” cache from seeing a squirrel feast on a bird. But I’m betting most of us agree: A bird in the air is worth two in a squirrel’s stomach.