Do birds ever mate with other avian species? The New York Times recently tackled this question, and I found the answer fascinating: about 10% of the 10,000 known bird species have mated with another species.  Hybridization most commonly occurs between closely related species, but occasionally it happens between birds of different genera that have evolved separately for millions of years. (Quick reminder: Genus is the taxonomic classification level just above species.) Animals have to be in the same family (the level above a genus) to hybridize, The New York Times reports.

Some hybrids fare better than others. Even if the mix is healthy and lives to adulthood, it may not be able to produce offspring (similar to when when horses and donkeys mate—their mule offspring are most often sterile).

Here are some of the coolest hybrids:

When a golden-winged warbler makes whoopee with a blue-winged warbler, the results aren’t always the same: you get a Brewster’s or a Lawrence’s warbler, depending on the genetic makeup. First discovered in the wild in 1874, Brewster’s warbler (below) exhibits genetically dominant traits, and Lawrence’s warbler (far below) exhibits genetically recessive traits. These two hybrids are relatively common and found throughout the eastern United States. There’s some controversy surrounding their parents, which are so closely related that scientists have debated whether they should be considered one species or two. Brewster’s and Lawrence’s warblers successfully mate with blue-winged or golden-winged warblers (producing birds that are clearly hybrids and birds that are indistinguishable from either pure species), but rarely with other hybrids. 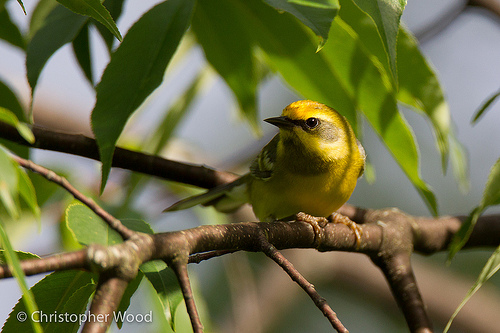 Different species of pheasants have long been known to mate, and there are even instances of pheasants and chickens reproducing. Below is a picture of two specimens of crosses between pheasants and domestic chickens (which are in the same family, Phasianidae). The jury is out on whether they would taste like chicken. 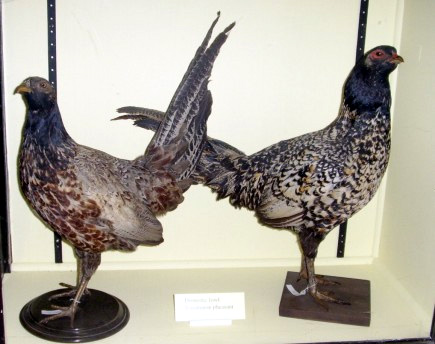 There are 23 known hybrid bird of paradise species in the Indonesian islands. The Barnes’ Astrapia (below), living in high-altitude forests of Papua New Guinea, is a cross between the Ribbon-tailed and Princess Stephanie’s Astrapias, but most of them resemble one parent or the other. These elusive creatures are rarely seen.

When a swan and a goose get together, their offspring is called a swoose. The known goose-swan pairings, in nature and captivity, include a mute swan and domestic goose, and a Black Australian Swan and Canada Goose. Their offspring are thought to rarely survive past fledging. Go to http://www.gobirding.eu/Photos/Swoose.php to see lots of great photos of this remarkable bird.

The Rackelhuhn is a cross between a western capercaillie (also known as a wood grouse) and a black grouse. It has very uniform coloring, and because its parents are so similar it is difficult to identify at first glance as a hybrid. It is normally black or dark-colored with lighter-colored wing tips, and while quite attractive, unable to pass on its good looks: it’s sterile.