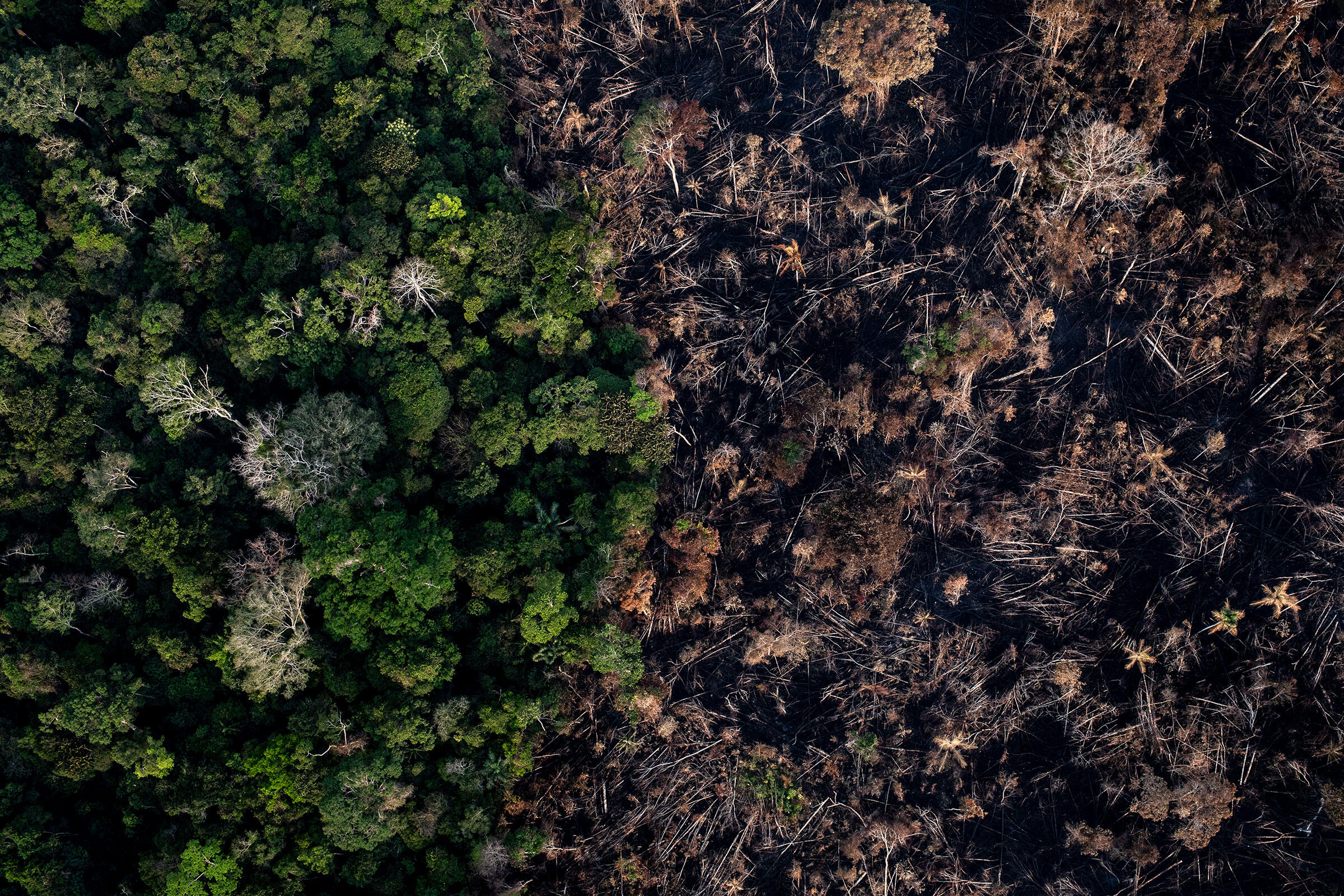 The Amazon Could Soon Transition to a Dry, Savanna-like Ecosystem

A new study shows that more than 75 percent of the rainforest is losing its ability to recover from droughts and fires—a finding with huge consequences for humans and wildlife alike.

For decades, deforestation, drought, fires, and climate change have ravaged the Amazon, worrying scientists that the sprawling South American rainforest could eventually hit a critical tipping point and irreversibly transition into a drier, savanna-like ecosystem. More recently, three once-in-a-century droughts during a 10-year span in 2005, 2010, and 2015 caused some researchers, including the late Thomas Lovejoy, to speculate that the Amazon was nearing this breaking point. But most attempts to gauge the health of the rainforest or predict when a point of no return would occur have relied on theoretical models, leaving much uncertainty.

Now, a new study using real-world data and published in Nature Climate Change reveals that the Amazon is losing its ability to recover from disturbances and indeed approaching a pivotal moment, with huge consequences for humans and wildlife alike. The team of researchers, led by Chris Boulton at the University of Exeter, tapped into a trove of satellite data collected between 1991 and 2016 to examine how the Amazon has changed over time and better understand how close this possible tipping point could be.

Strikingly, the researchers found that more than 75 percent of the Amazon forest has lost resilience, meaning it can’t recover as quickly after drought or fire. In chunks of forest closer to human development—croplands, roads, or urban areas—the forest lost resilience faster. Similarly, areas in the basin that receive less rainfall and which already have a drier climate are becoming more stressed and rapidly losing resilience.

As a result, “if that same drought [in 2005] were to happen today, it would take a lot longer to recover,” Boulton says. The researchers see this severe loss in resilience as a strong signal that the Amazon will soon hit its much-feared tipping point. “This study tells us something about the actual world we live in,” Boulton says, setting the team's findings apart from modeling studies that have attempted to forecast when the Amazon might cross this looming threshold.

To estimate the forest’s resilience, the researchers calculated how much the amount of biomass varied from month to month across the Amazon basin throughout the 25-year study window. This required analyzing satellite data detailing the “vertical optical depth” of an area, a measure of tree biomass that is closely related to water content. An increase in variation for this measure would indicate a loss in forest resilience.

The Amazon has endured changes in rainfall over millennia, but large-scale deforestation, drought, and fires are threatening the very processes that makes the Amazon a rainforest. Thanks to geography, the Amazon produces almost half of its own rainfall. When humid air from the Atlantic Ocean hits the Andes Mountains, it gets trapped over the Amazon basin and falls as rain. The trees suck water up through their roots and then release moisture back into the atmosphere, a process called evapotranspiration. A single tree can emit 1,000 liters of water into the atmosphere each day, falling as rain elsewhere in the basin. This natural water cycle—and the processes that the forest uses to restore itself after an event like a fire or a drought—breaks down when the forest is less resilient. The worse resiliency gets, the longer it takes the forest to recover—until it can't recover at all. 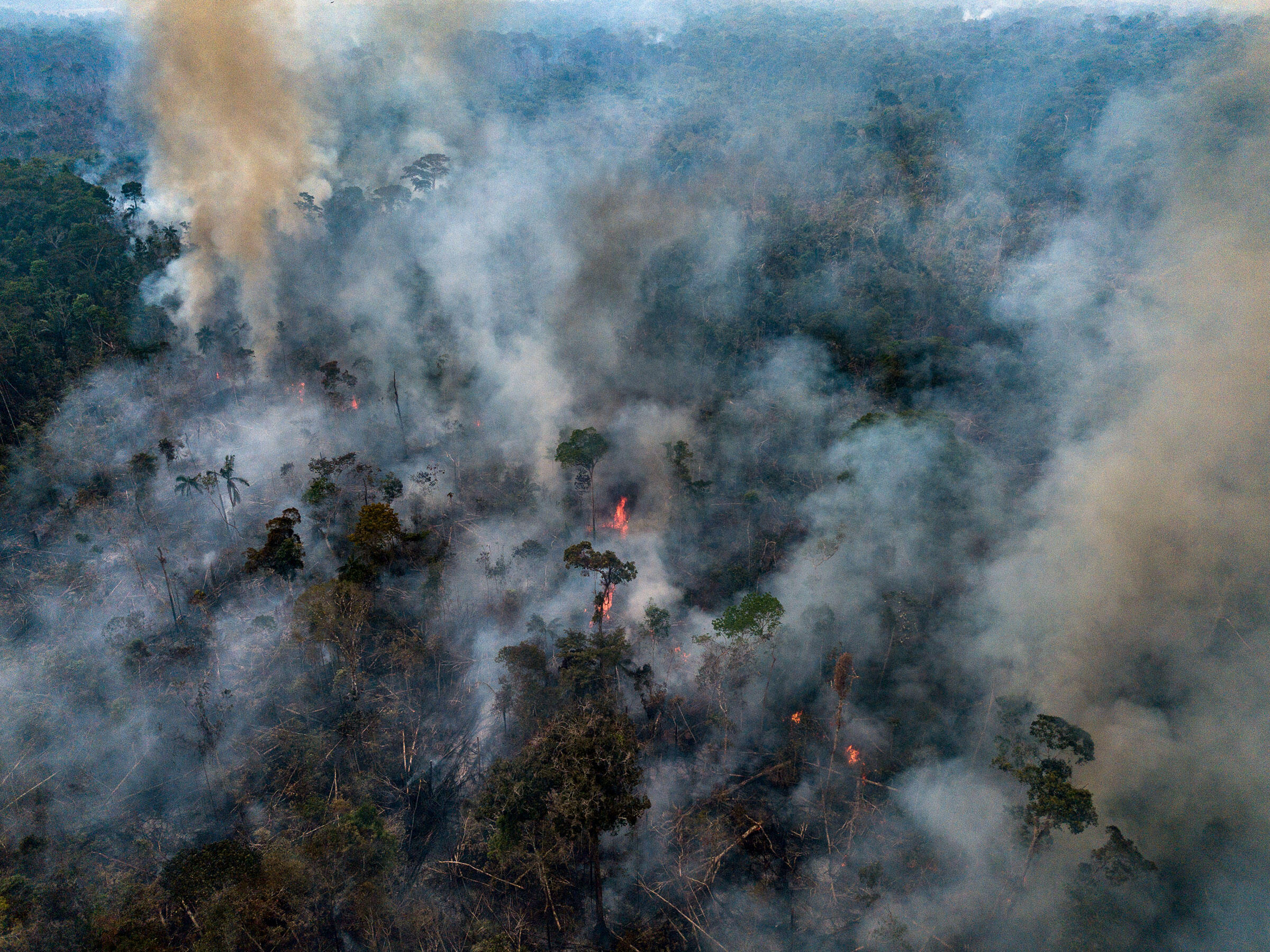 At a press briefing for the study, Tim Lenton, a coauthor on the paper and director of the Global Systems Institute at the University of Exeter, emphasized that hitting the Amazon’s tipping point would not only be devastating for the world’s largest rainforest but also have repercussions for the whole climate. The Amazon acts as a carbon sink for the planet, trapping greenhouse gasses like carbon dioxide—but that could change if the rainforest becomes a dry savanna. Instead, the region could start emitting more carbon than it absorbs. “That’s a major change in one of earth’s most important systems,” says Miles Silman, an ecologist at Wake Forest University who studies forest dynamics in the Amazon.

Climate change fuels the deadly trio of drought, fire, and deforestation that is pushing the Amazon beyond its limits. A recent report by the United Nation's Intergovernmental Panel on Climate Change forecasts decreased precipitation in the Amazon with worsening droughts. The warmer and drier conditions lead to increased fire and more dieback of trees, reducing available moisture in the air and triggering the cycle to repeat in a dangerous pattern. “Put forests in the equation with humans and fire, and things change really dramatically,” says Silman.

Along with the people who still call the Amazon home, the results of this study have dire implications for its wildlife.

Along with the people who still call the Amazon home, the results of this study have dire implications for its wildlife. A biodiversity hotspot, the Amazon contains the greatest number of freshwater fish species in the world—almost 3,000—plus 430 mammal species, including the world’s largest rodent, the capybara. An estimated 1,500 bird species depend on the Amazon rainforest to find food, raise young, and survive. The new study throws that current existence into question.

“If [the forest] didn’t recover, that would be a game-changer,” says Philip Stouffer, a biologist at Louisiana State University who wasn’t involved with the study. For nearly four decades, Stouffer has studied Amazonian birds—rainforest specialists that occur only in closed-canopy areas with dark understories—in a preserved patch of the Amazon. His previous research detected a decrease in the abundance of ground foragers, most likely caused by climate change and the same resilience issues the new paper highlights. How the birds fare after we hit the tipping point, says Stouffer, depends on what the transition looks like. If it happens slowly, they may still have access to food and adapt to new resources. But a rapid shift to a savanna-like ecosystem? “There’s no doubt there would be catastrophic changes to the rainforest bird community,” he says. Vitek Jirinec, an ecologist at Integral Ecology Research Center who also was not involved with the study, agrees that a fast transition would be a disaster for the birds. “There’s no way these habitat specialists can adapt in that sort of time frame.”

Previous research by Jirinec and Stouffer has shown that Amazonian birds have the ability to adapt to certain changes: They found that species there are shrinking with climate change, weighing less but having longer wings to dissipate heat more easily. Although birds could theoretically fly to remnant forest patches as the rainforest shifts to a new ecosystem, Jirinec says that these rainforest birds seldom move beyond the several hectares of forest that they occupy their entire lives. They avoid hot and dry conditions, so an open pasture and even rivers present insurmountable barriers—to the point that you may see a closely related but unique species on the other side of the river.

The new analysis didn’t try to predict exactly when the Amazon might reach its tipping point, but a previous study suggested that this threshold could come as soon as 2039. This current trajectory isn’t irreversible, Boulton says, but a transition to savanna would be extremely difficult to prevent, perhaps requiring the global climate to revert to pre-industrial carbon emissions. While his team’s findings do not bode well for the Amazon or any of the life that currently calls it home, Boulton believes there’s still hope. “It gives people a chance to do something about it potentially,” he says.