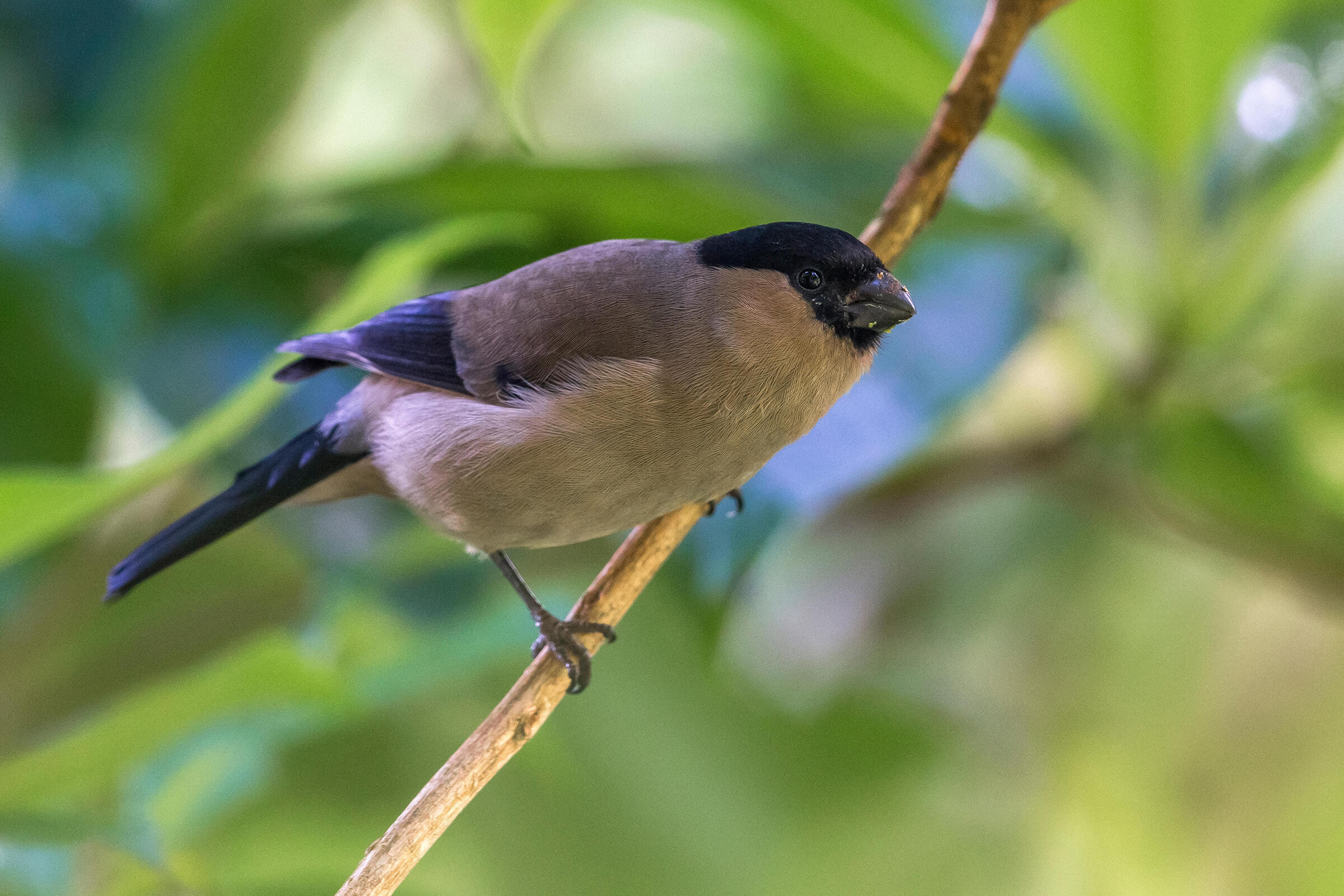 The health of the Azores Bullfinch, endemic to the island of São Miguel, in the Azores, is closely tied to its habitat. Its diet includes seeds, buds, berries, and fruit of at least three dozen native plant species. Photo: Buiten-Beeld/Alamy

The Encouraging Comeback of the Azores Bullfinch

At a time when most European bird populations are shrinking, the recovery of a Portuguese songbird is a bright spot that underscores the importance of habitat restoration.

Just before Luís Pacheco was born in 1992, a mysterious man began showing up near his family’s home on the Portuguese island of São Miguel. The man would search the woods for a small grey songbird with a black crown, tail and wingtips, arousing the locals’ curiosity. “When I was young, my father and my uncles talked about this guy, wondering what he was doing in the forest,” Pachecho told me. “It was very strange for the people from the island!”

It turned out the man was biologist Jaime Ramos, who was initiating what became a decades-long effort to save the Azores Bullfinch, an endemic songbird that was already in trouble when he arrived. Locals knew the bird as the Priolo, but paid little attention to it back then. Their attitude has changed significantly over Pacheco’s lifetime, and today, thanks to the efforts of conservationists, volunteers, and supportive locals, the recovery of the Priolo is hailed as a rare success story in a challenging time for European birdlife.

In early October I went in search of the bird, starting on the grounds of the Priolo Environmental Center on the eastern tip of São Miguel, a 290 square-mile island located 1,000 miles west of Portugal on the Azores archipelago. The center is a testament to the bird’s status on the island as a source of both pride and concern. After passing through a silent, dense stand of towering trees planted in tight military formation, I emerged onto a trail among native junipers, laurel, and heather. As the day alternated between sun and rain, I spotted Chaffinches, Grey Wagtails, and Common Waxbills, but the Priolo remained elusive.

The closest I got to a Priolo was inside the center, where Pacheco, now an interpretive guide, led me through the conservation history of the species while its melodious call sang out from a portable speaker. Pacheco, who has helped with Priolo conservation since his internship with the Portuguese Society for the Study of Birds (SPEA) eight years earlier, related how the birds were abundant when humans first settled the island, hundreds of years ago. But by 1900 they were rare, primarily because humans had whittled away their native habitat, replacing endemic forest with pastureland and dense plantations of Japanese cedar. Non-native species that had been planted for beauty or utility—such as Chilean rhubarb, Kahili ginger lily, lily-of-the-valley tree, and Australian cheesewood—became invasive, choking out the native laurel forests the Priolo depends upon.

In the 1990s, when he was poking around the forest while working on his Ph.D., Ramos began the first surveys to get a grasp on the bullfinch population. When it became clear that the species was declining, Ramos experimented with keeping a few birds in captivity, curious about the potential for breeding. But unlike other finches that readily accept proffered sunflower seeds and other feed, the Priolo was picky and wouldn’t accept anything other than food collected from the forest. Ramos decided that habituating the Priolo to captivity would require time and effort that they didn’t have. The species was listed as “endangered” on the on the IUCN Red List in 2000, and as “critically endangered” in  2005, when only a few hundred birds were left.

Around that time, SPEA took the lead on Priolo conservation efforts, which have been spearheaded by coordinator Azucena de la Cruz Martín and head of terrestrial conservation Rui Botelho. In 2005 and 2006 they tried putting out a network of feeders to compensate for the loss of native plants, but they encountered the same problem Ramos had when he was considering captive breeding. The feeders attracted plenty of birds, but not the bullfinch. Ultimately it became clear that habitat restoration was most crucial.

Even after zeroing on this strategy, it took years to figure out how to beat back invasives and best nurture native plants. To make matters more complicated, years of invasive plant encroachment led to the loss of natural soil seed banks, so starting nurseries became another key part of the habitat recovery equation.

Today 1,100 acres of laurel forest at varying elevations have been restored. Those tracts, which lie within the 15,000-acre Pico da Vara/Ribeira do Guilherme Special Protection Area, is once again thick with Macronesian holly and Portuguese laurel, Azorean cedar and Azorean blueberry, all endemic to the island and essential to the bullfinch’s diet. Although the bird has adapted to feeding on some non-endemic species during the lean winter months, it is entirely dependent on native plants for most of the year, feasting on tree seeds, flower buds, fleshy fruit seeds, and even–unusually–fern fronds, from 37 different plant species. This diverse diet is probably part of the reason feeders failed. “What we learned from the Azores Bullfinch,” says de la Cruz, “is that by recovering the habitat and food sources, we can stabilize the population.” 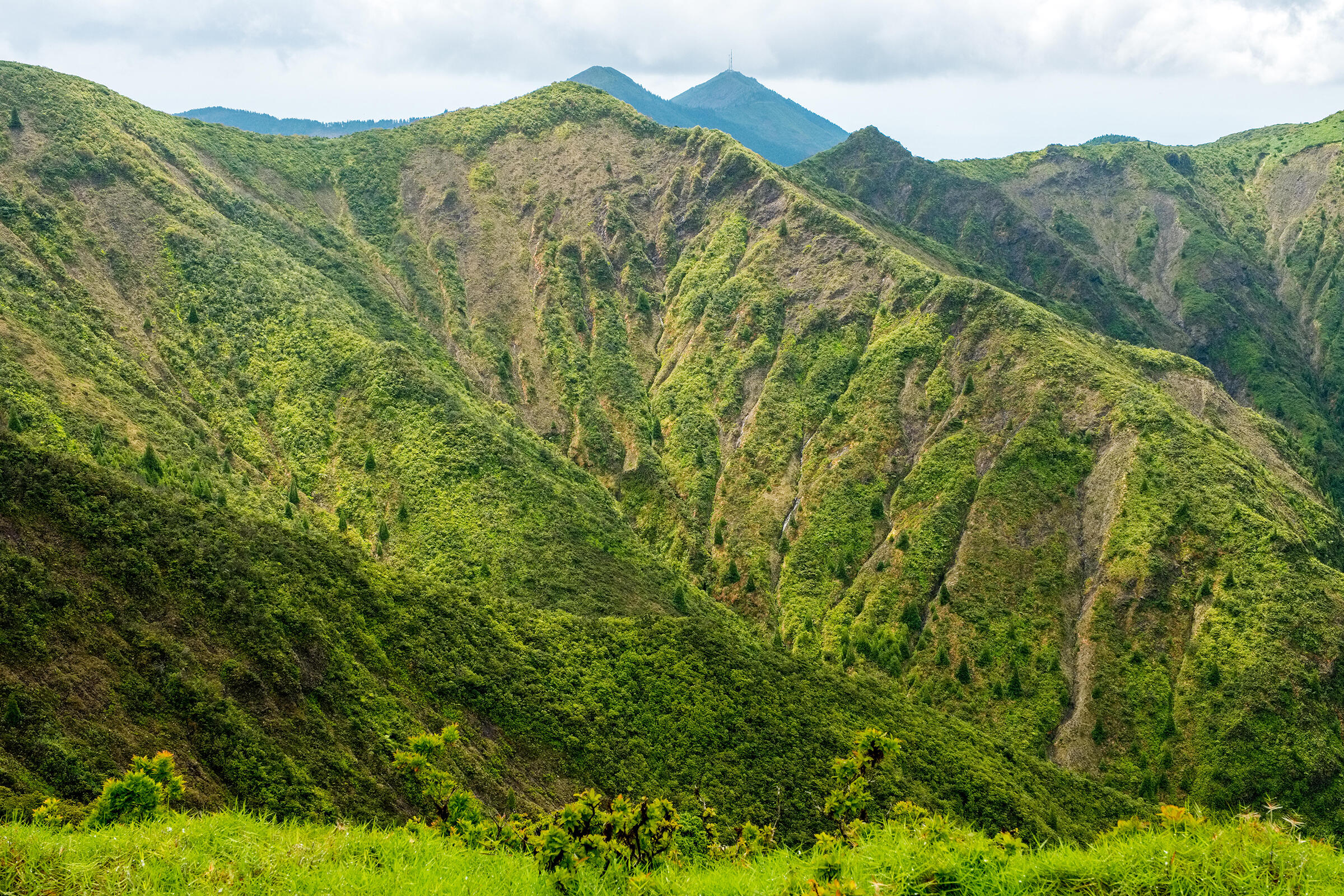 The slopes of Pico da Vara, the highest point on the island. Photo: Shoults/Alamy

And the Priolo population, at around 1,000 birds, is indeed considered stable. In 2016 the species was downlisted to “vulnerable” on the IUCN’s list. “[It’s] now become a symbol of the territory and a symbol of a wider conservation of Azorean biodiversity,” de la Cruz says.

The recovery efforts have been so successful that the Azores Bullfinch was highlighted as one of the few bright spots in the 2021 European Red List of Birds report, released by BirdLife International in October. Of the 544 species assessed, 37 species were reclassified to be more at risk since the prior report, published in 2015. While 47 species were deemed less at risk than previously, many of their populations are still shrinking. Overall, a third of all European bird species are in decline and one out of five are threatened or near threatened with extinction.

The takeaway, BirdLife Europe’s conservation officer Claire Rutherford said in a press release, is that “bird populations in Europe are dropping mainly because they are losing their habitats.”

As the Azores Bullfinch shows, if you bring back native habitat, birds rebound.

As the Azores Bullfinch shows, if you bring back native habitat, birds rebound. Yet while the Priolo population is considered stable, the term is relative in these tough times for birds. Even as the estimated 970 individuals are hanging on, invasive plants continue their incursion, threatening to undo all the conservation work accomplished so far.

“I feel divided about the downlisting,” says de la Cruz. “On one hand, it is good news and shows that restoration works. On the other hand, it can convey the message that there is no longer need for action.”

Ramos, now a conservation biologist at the University of Coimbra in central Portugal, agrees the gains are precarious. “Invasive species are very aggressive, and their control is a long-term project,” he says.

SPEA is set on maintaining its habitat gains and expanding its focus to restoring vegetation in watersheds and steep areas vulnerable to landslides, which frequently claim homes, and sometime lives, of Azoreans. The efforts underscore that taking care of landscapes can help humans along with birds.

But finding financial support for the work remains challenging. Just since my visit this fall, Pacheco’s position at the Priolo Environmental Center was cut due to budgetary constraints, says de la Cruz.

In spite of the job loss, Pacheco’s enthusiasm for the bird and its conservation hasn’t flagged. “It’s very important to have this project here,” he says. Priolos and the healthy habitat where they live attract tourists in search of nature and scientists dedicated to restoring landscapes and wildlife populations. And, he says, this little songbird has given his local community a deeper sense of connection to, and sense of responsibility for, this one particular place on Earth where they all belong.