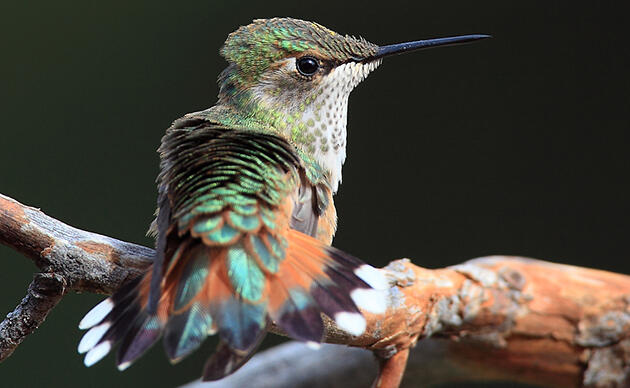 If you’re lucky, and you live West of the Rockies, you’ve seen a courting male Rufous Hummingbird, displaying like a crimson comet. The male mates with any female that graces his well-defended territory of blooming shrubs.

The duties of nesting fall entirely to the female.

Her nest-building is a marvel: She first weaves a cup of soft, fluffy plant material. The downy cup, she layers over with moss bound with adhesive strands of spider web. The final touch: layering the outer surface with lichen flakes to provide perfect camouflage. Smaller than a walnut half, the nest soon harbors two eggs the size of shelled peanuts. A favorite nest site is the fork of a downward-drooping twig, perhaps low in a shrub or up higher in an old conifer.

The female feeds the two nestlings vast quantities of tiny insects as well as some nectar. We think of hummingbirds as nectar-feeders, but they also excel in hawking insects, gleaning aphids from leaves, and pilfering insects from spider webs, while dining on spider eggs and young spiders, too. Mm.m.m….

You can take a peek at her nest on birdnote.org. I’m Michael Stein.

As hummers make their way north for spring, draw them to your yard or space with the plants they need to refuel.