Emperor penguins are the only birds that nest on ice, right? Wrong! The bird world has been shaken to the core (well, at least astonished) by news of a small finch that builds its bulky nest on glacial ice in the Peruvian Andes. The species is known as the white-winged diuca-finch (Diuca speculifera) and inhabits high mountain meadows in Argentina, Bolivia, Chile and Peru. It belongs to the large Emberizidae family, making it a far distant relative (in geographic terms) of the American tree sparrow, Lapland longspur and snow bunting, all of which breed on the Arctic tundra in not-quite-so-harsh conditions. 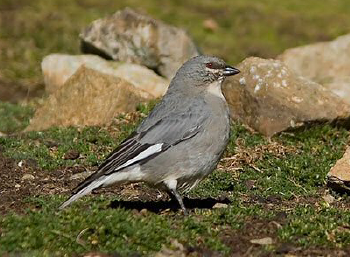 The discovery, reported in the current issue of the Wilson Journal of Ornithology, was made by University of Massachusetts Amherst geoscientist Douglas Hardy with help from his 14-year-old son Spencer, an enthusiastic bird student who identified the species from photographs. The senior Hardy has been monitoring climate change on the Quelccaya Ice Cap, high above Cuzco, for several years and had found a number of diuca-finch nests that appeared to have fallen off the ice face as it melted. Then this past austral winter he located intact nests on the ice and one of them contained abandoned eggs. 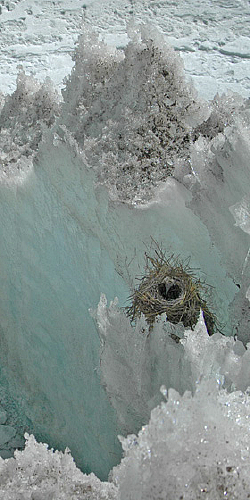 Hardy describes nesting conditions on the ice cap, at nearly 19,000 feet, as brutal for weeks on end with low oxygen, bitter cold, heavy snow and high winds. Few people, he relates, have visited the glacier during the breeding season, believed to be in April and May since immature birds have been seen in June, and birds on nests have never been observed. Indeed, little information exists about the species' nesting habits from anywhere in the Andes. The white-winged diuca-finch, he says, may be the highest-nesting bird in the Western Hemisphere. And the nest, Hardy relates, is a bulky structure weighing just under half a pound. It starts from a platform of twigs and grasses and tapers to a cup 2.5 inches in diameter that is woven from finer grasses and feathers from other birds but, surprisingly, contains no alpaca or vicuna fleece. The eggs rest 10 inches off the ice. 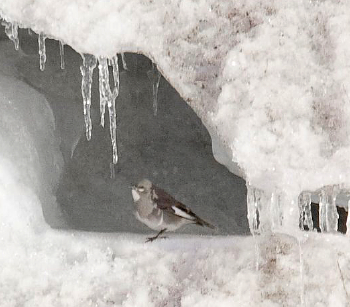 The retreat of the ice margin in that area, the scientist says, has apparently increased to one meter a year due to global warming and there are indications that the faster melt is impacting downstream wetlands where the tough glacial-nesting finches and other birds get nesting material. Changes in the Andean climate, he adds, are likely to affect not only wildlife living high in the mountains but also communities at lower elevations where people rely heavily upon the Quelccaya glacier as a water resource.