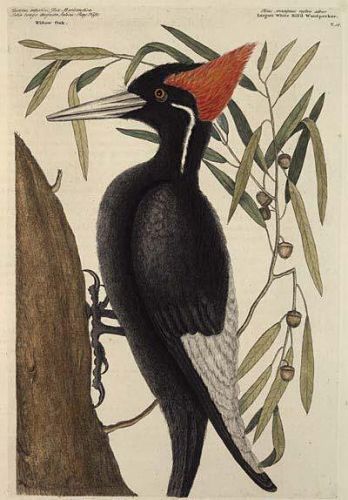 Ivory-billed woodpecker and willow oak, by Mark Catesby. This is one of the artist's most famous plates. (Courtesy of the Ewell Sale Steward Library at Philadelphia's Academy of Natural Sciences.)

A century before John James Audubon charmed audiences with his bountiful bird illustrations, another artist had already chronicled many New World wildlife and plants: Mark Catesby, an Englishman born in 1683 (Audubon was born in 1785). “Catesby was one of the earliest naturalists to explore the southern British colonies of North America,” writes Robert Robertson, author of a detailed profile of Catesby appearing in the February 2011 edition of Natural History magazine and a former curator of malacology at the Academy of Natural Sciences in Philadelphia. Catesby eventually published his work in a series of engravings to the delight of European subscribers.

Like Audubon, Catesby was interested in nature at an early age. Plants in particular piqued his fancy, and he eventually became a horticulturist. At 29, Catesby traveled to America, “in search of adventure,” writes Robertson, and landed in Virginia where his sister lived. He stayed for seven years, exploring the Appalachian region, collecting specimens, and drawing. 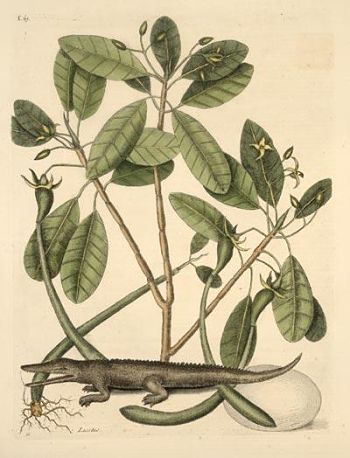 Alligator, by Mark Catesby. An original edition of Catesby's The Natural History of Carolina, Florida, and the Bahamas is one of the treasures at Ewell Sale Steward Library, part of Philadelphia's Academy of Natural Sciences. It was acquired through Horace Walpole, the 18th century English author and politician. (Courtesy of the Ewell Sale Steward Library at Philadelphia's Academy of Natural Sciences.)

After Catesby returned to England in 1719, “the intrigue of the New World, fueled by his judicious submission of samples to [potential benefactors], opened doors of sponsorship and encouragement for a second voyage to the Americas,” writes Terrance M. Wright, in an online biography, and he journeyed back to the New World in 1722. This time, he had a plan: “to illustrate all the plants, animals, birds, fish and reptiles of the American Colonies, creating a collection of drawings and watercolor paintings upon which his future endeavors would be based,” according to Wright. Catesby also visited the Bahamas for nine months during that visit.

Back in England again several years later, Catesby set to work on an ambitious project entailing the production of 220 etched plates based on his observations. “They were to be published in 11 issues of 20 plates each, to be sold by subscription, and later bound into volumes,” Wright indicates. The first plates were inscribed with the year 1731; plate releases spanned nearly 20 years.

Entitled The Natural History of Carolina, Florida, and the Bahama Islands, the project was “the first major work on the flora and fauna of any region of North America,” writes Robertson. It also inspired reprints and later editions. (If you’re curious to see how the volumes appear in person, one place you can visit is the Academy of Natural Sciences of Philadelphia. Its Ewell Sale Stewart Library hosts one complete copy—in two volumes—of the first edition, and one complete copy of a posthumously published edition.) 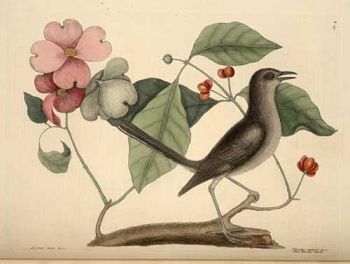 Mockingbird with dogwood, by Mark Catesby. Catesby's work was owned by many English and European scientists and aristocrats. (Courtesy of the Ewell Sale Steward Library at Philadelphia's Academy of Natural Sciences.)

Catesby's subjects range from birds and mammals to fish, insects, reptiles and amphibians, and of course, many plants. Some of the birds are familiar—take the northern cardinal, for example; others are now extinct, such as the passenger pigeon. At times, Catesby mixed species on one plate that wouldn't normally mingle. In one image, for instance, an Anolis lizard found in Jamaica clings to the sweet gum leaves of a mainland tree. He also made some blatant pictorial errors as a result of the etching process (see Robertson’s in Natural History magazine.)

Catesby's companion text wasn't perfect, either, but his descriptions still still made an indelible mark on history: He abandoned the Indian names given to organisms, choosing scientific ones instead—a nomenclature that inspired the taxonomist Carolus Linnaeus. He “adopted Catesby’s scientific naming of 38 of the 100 birds in Natural History, for his Magnum Opus Systema Naturea" Wright notes. 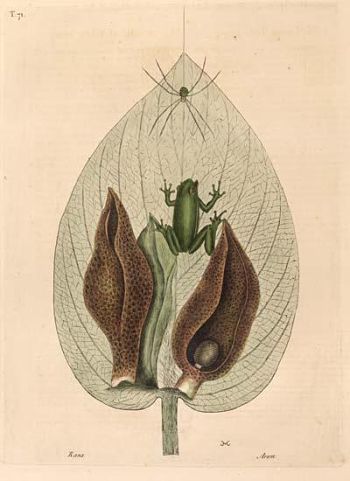 Catesby’s natural observations also led the scientific community to an insight involving birds—they migrate. For three September nights during his stay in the Bahamas, Catesby heard bobolinks calling as they flew overhead. The birds use rice fields, but “as rice does not grow in the Bahamas and ripens in the Carolinas in September, Catesby recognized that the birds must have been en route” from Cuba, writes Robertson. It seems hard to imagine now, but before that September, “birds were thought to hibernate in such unlikely places as the bottoms of ponds.” (Catesby published a paper on bird migration much later.) 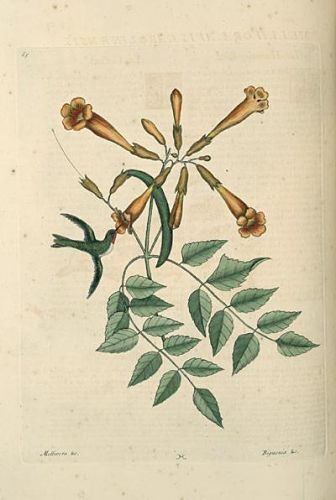 A hummingbird, by Mark Catesby. (Courtesy of the Ewell Sale Steward Library at Philadelphia's Academy of Natural Sciences.)

John James Audubon seems to have embodied the naturalist inclinations of his predecessor, and it’s tempting to think that he also found inspiration in Catesby’s work, given the similarity in subject matters. Yet, “I’m not convinced that Audubon actually saw Catesby’s illustrations,” Robertson told me in an interview. He notes that when people point out resemblances in the artists’ works, they’re probably not considering the style but rather the subject matter—indeed, both men painted some of the same birds, such as the Carolina parakeet. But “Catesby was primarily a botanist,” says Robertson, and he didn’t seem to share Audubon’s preternatural environmental concern. “Catesby was not a conservationist,” says Robertson, “He wrote about eating flamingos.” But he also drew them, and our knowledge of America’s fauna is richer for it.

For more on Catesby, Robert Roberston recommends this film: The Curious Mister Catesby, as well the book Mark Catesby: The Colonial Audubon, by George Fredrick Frick and Raymond Phineas Stearns.