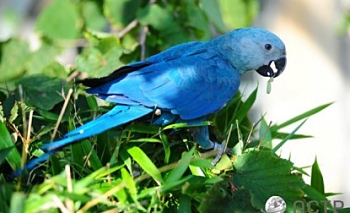 The azure Spix's Macaw, now extinct in the wild, most likely due to the illegal pet trade / Credit: Association for the Conservation of Threatened Parrots

Did you know that President William McKinley had a parrot named “Washington Post?” The parrot trend has certainly persisted through time—there are more than 40 million kept as pets in the U.S. alone. While it makes sense that these intelligent and bejeweled animals would make excellent pets, it’s anything but sensible when the illegal animal trade threatens biodiversity and accelerates extinction.

The business of exotic pets is poorly regulated and enormously profitable: Interpol values the illegal animal trade at $10 billion dollars, placing it just behind guns and drug trafficking in profitability. This illicit industry is believed to have contributed to the threatened status of 66 parrot species and the extinction of brilliant blue Spix’s Macaw.

In Mexico alone, the nonprofit Defenders of Wildlife found that between 65,000 and 78,500 parrots were traded internally, according to a study in 2007. More than 75 percent—about 50,000 to 60,000 parrots—died before reaching a purchaser. Of the 22 identified species, six are endangered, 10 are threatened, and four are receiving special protection.

After publishing their report on the Mexican parrot trade, the researchers brought their information to the authorities and in 2008, the Mexican Congress has made it illegal to buy, sell or trap wild parrots in Mexico. Since then, one of the study’s leading researchers has helped launch a public awareness campaign with the Environment Ministry to highlight the importance of parrot conservation and to dissuade people from buying wild parrots.

Peru also shares Mexico’s problems, with an estimated 88,000 parrots traded per year in the country’s internal market alone, according to a study released by the journal Bird Conservation International. In 2008, researchers monitored 20 wildlife markets in eight cities and identified 34 species, even though the Peruvian government only allows seven species to be traded. Of the 34 species, one is categorized as near threatened, two are vulnerable, and one is endangered—the gray cheeked parakeet. The study also finds that even for the seven species that can be legally traded, the numbers of parrots in the markets far exceeded the allotted amount. For example, only 150 Pacific parrotlets can be traded, but in the 20 wildlife markets alone, 361 parrotlets were found.

The Peruvian government has tried to address this issue with mixed success. Although it created the Instituto Nacional de Recursos Naturales (INRENA), an environmental protection organization, it has had limited success in enforcing the wildlife quotas. But the study finds hope elsewhere: it notes that five years ago, the city Cusco had a vibrant market, but the combination of dedicated local authorities, an active INRENA presence, and local rejection of the parrot trade have reduced the illicit trade. The study advises increased public awareness campaigns against the illicit trade, so that demand will decrease and fewer trappings will take place.

Conservationists are also working hard in places like Puerto Rico and Bonaire to restore these impressive animals, and in the meantime, keep your eyes open for updates.