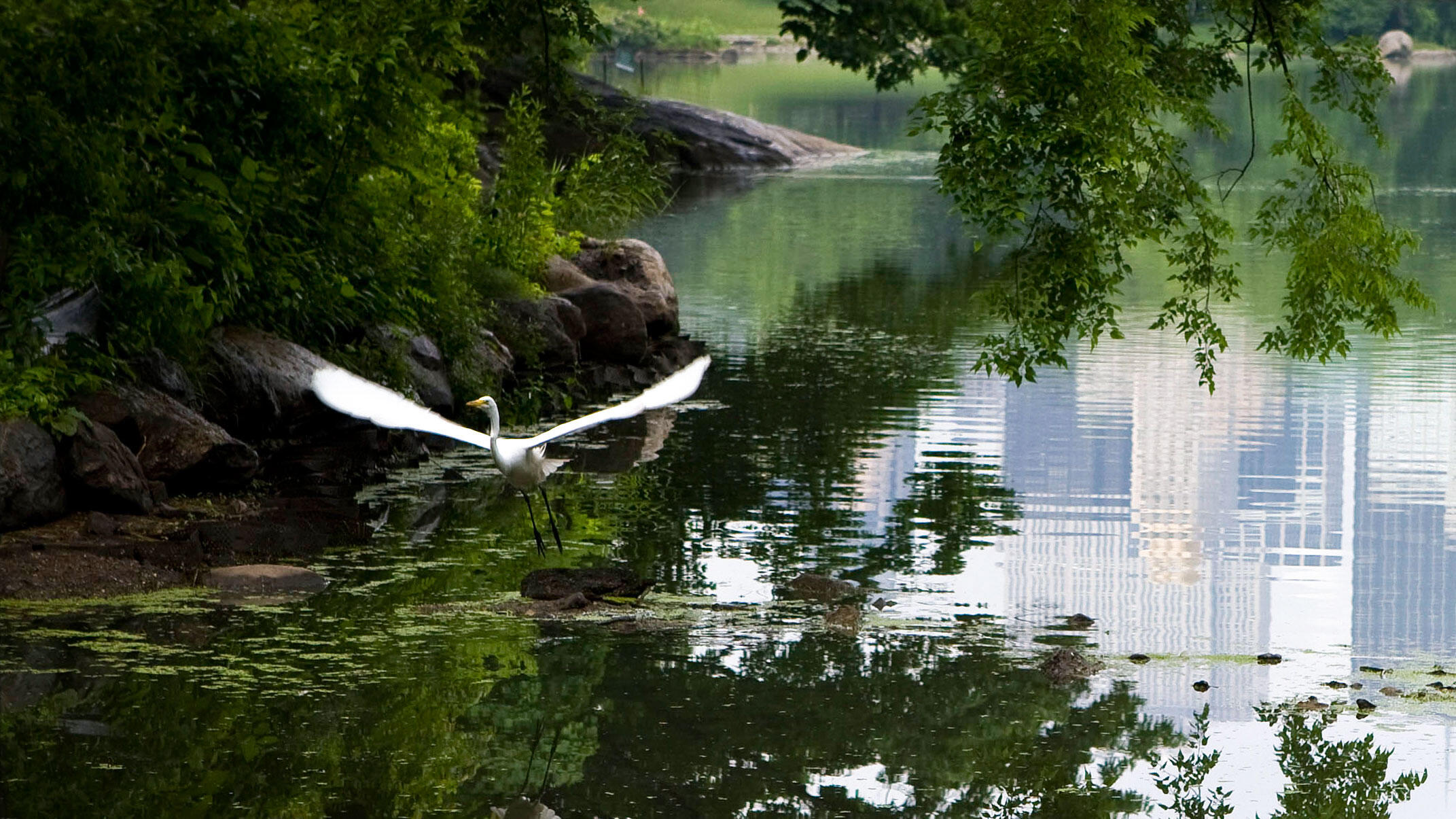 A Great Egret takes off from one of Central Park's water bodies, which are visited by dozens of waterbird species. Photo: Francois Portmann

It won’t be your typical birding experience—but that’s what also makes it so special. We asked the experts for tips to make the most of your visit.

Most travel guides aren’t designed for birding—so in this series, we’ve called up birders who bird and work in some of the best birding territory in the country to get the inside scoop on where to go, what to look for, and how to make your trip as successful as possible.

Take some great birding, then add subway access, plentiful benches, restrooms, and even snack carts—that’s birding in Central Park in the heart of Manhattan. We mean it when we say great birding, too: More than 200 species of birds visit the park every year, taking advantage of all that green space in the middle of the dense city buildings. Each spring, migration keeps birders coming back for warblers and other species stopping to refuel. People willing to spend the whole day sweeping through the park and targeting sightings of rare birds occasionally top 100 species, although that takes concerted effort, according to Kellye Rosenheim, who works at New York City Audubon and co-authored a book on birding in the city.

Even without such dedication, birding in Cental Park can be highly rewarding and yield a surprising number of species. This makes it hugely popular with birders, which is a resource in itself: Word of rarities spreads quickly, and there are always plenty of like-minded people to offer directions or tips—just walk up to anyone sporting binoculars. We called up a few of them to help you plan your trip.

Central Park crams three forested areas, seven relatively large bodies of water, and a motley collection of meadows, gardens, and rock outcroppings into less than one-and-a-half square miles. Although the meticulous landscape architecture was designed primarily for urbanites’ recreation, the city's spread over the past century and a half has made the park's enduring greenery particularly valuable bird real estate—not to mention an oasis for migrants passing through the city.

Central Park’s Woodlands
The Ramble is the single most popular wooded area of the park for birding, particularly where the stream nicknamed "The Gill" flows. In the spring, the treetops are lush with migrating warblers, and in the fall it's a hotspot for Northern Flickers, Cedar Waxwings, and other striking birds. Elsewhere, the North Woods is another large, heavily forested area with somewhat fewer birders. Hallett Sanctuary, a third wooded landscape only opened to the public relatively recently, is "underbirded," according to long-time and well respected park birder Tom Fiore. That's partly because it is only open during certain times of the day, not including mornings—primetime for birding.

Red-tailed Hawks and Other Birds of Prey
In the early 1990s, a Red-tailed Hawk began nesting across the street from Central Park and captured the heart of the city, earning the nickname Pale Male for his unusually light coloring. The same bird (or maybe his successor; birders are split over whether “Pale Male” has become a title rather than a name) still rules over a stretch of Fifth Avenue and is sometimes spotted in the park. The city is home to many other Red-tailed Hawks that sometimes visit the park, so even if you miss your celebrity sighting, you might still see one. Peregrine Falcons and owls—including Great Horned, Long-eared, and Barred—can also occasionally be found in the park. 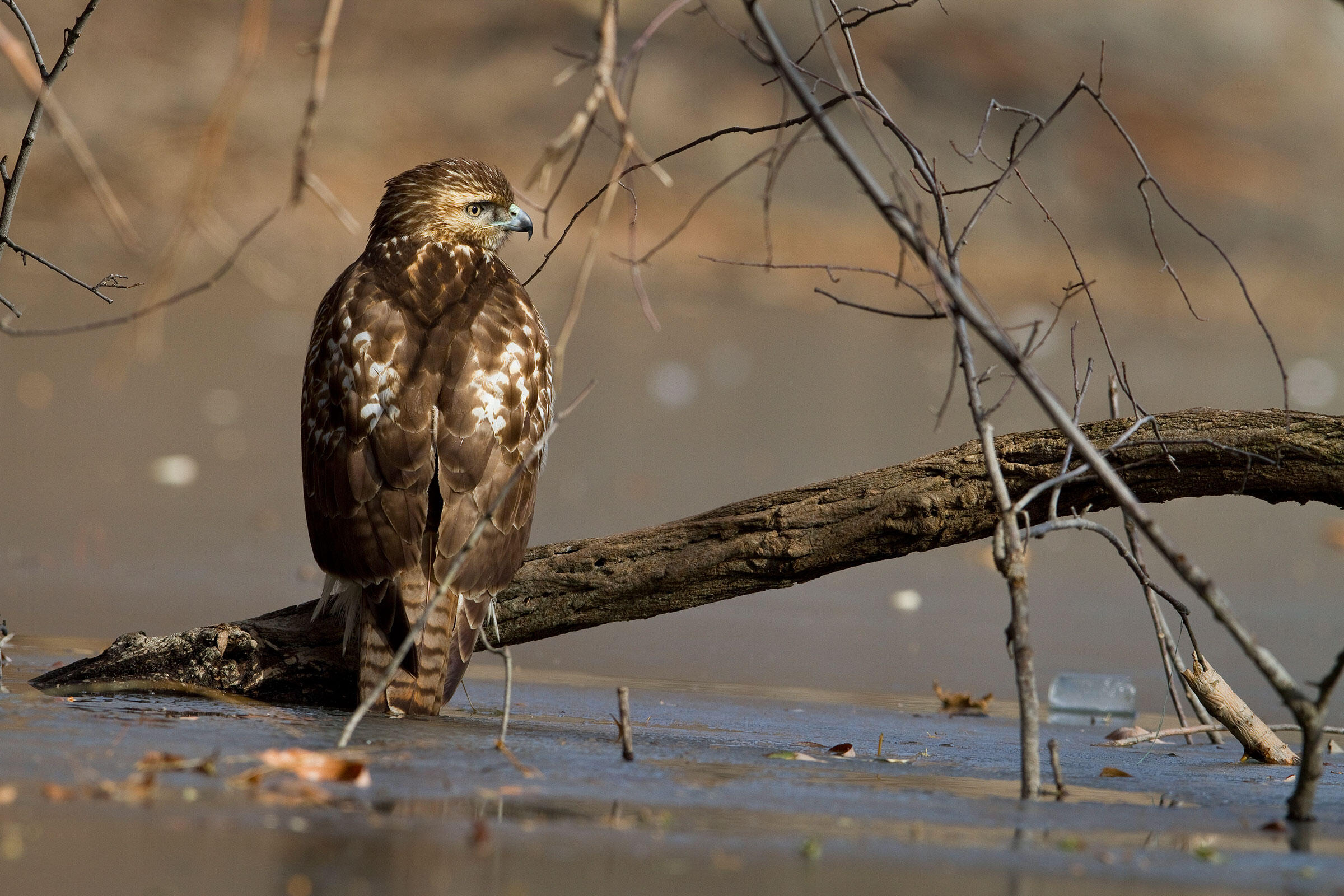 Red-tailed Hawks are flourishing in New York City to the benefit of birders. Photo: Francois Portmann

If you’re looking for something more dramatic, more than a dozen species of raptors migrate directly over the park during September and October. Belvedere Castle offers extensive sky panoramas for a good view of the spectacle.

The Reservoir
During the winter, the Reservoir is particularly popular with waterfowl such as Ruddy Ducks, mergansers, and the occasional Ring-necked Duck, Green-winged Teal, or American Wigeon. But not all of the birds are on the water. In the fall, resident grackles crack open acorns from the nearby oak trees ringing the reservoir, and in the spring, the same trees can be dripping with warblers. The large body of water also attracts rarities. Earlier this spring, a Glaucous Gull caused a stir when it paid a surprise visit from the frozen North.

Summit Rock
Climbing up this rock formation—conveniently located near the Ramble—offers a new perspective on the park's birds, particularly songbirds. You'll have a 360-degree view of the tree tops, and it's a particularly fruitful stop during the spring migration, when birders sometimes spot as many as 10 different warbler species. 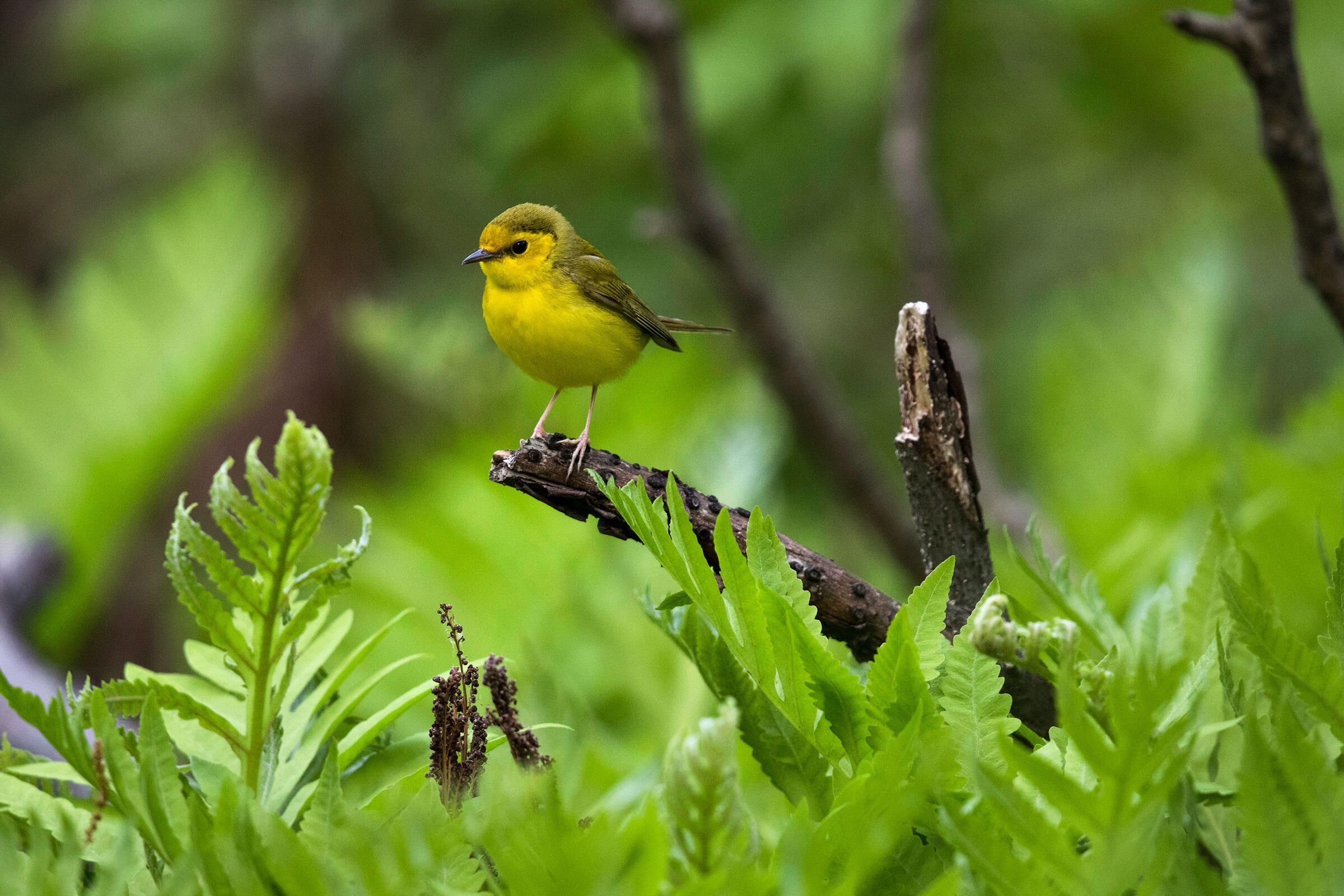 Hooded Warblers are among the many warbler species that take a pit stop in Central Park during spring migration. Photo: Francois Portmann

Central Park is most famous for its host of spring migrants—throughout May and early June, dozens of warblers stop by the park to refuel as they head north for the summer. Fall migration is another popular birding time, although the park's visitors are more spread out over the fall migration weeks. Winter has its perks, too, particularly an intriguing variety of waterbirds. And songbirds don’t desert the park even when the temperature dips. “I know this sounds a little silly, but I like the White-throated Sparrow because they kind of keep us going through the winter,” says Alice Deutsch, a dedicated park birder. The only really quiet time of the year is between late June and August, when the visiting birds all head inland to beat the heat and the handful of resident nesters hunker down.

Know Before You Go

New York City is the city that never sleeps, but if you have to, at least don't sleep in. “The earlier you get there the better,” Deutsch says of birding in Central Park. That doesn’t just keep you on the birds’ daily routine—it also helps you avoid the crowds of humans and have the best luck. “You want to get there by 8 o’clock in the morning," she says.

For real-time updates about current hotspots, check Twitter's #birdcp hashtag, which gathers sightings and notes from local birders. (Be forewarned that some reports are farther afield in New York City than Central Park or even Manhattan; reports for Brooklyn's Prospect Park and elsewhere also occasionally appear.)

And to know what everyone is talking about on Twitter, you’ll want to reference this map detailing Central Park landmark nicknames that birders have established over the years. Many of these names—like the Oven, Captain's Bench, or Sparrow Rock—don’t appear on official park signs. If you don't want to have to worry about finding your own way around, several organizations offer birding walks in the park, including New York City Audubon, Central Park Conservancy, the American Museum of Natural History, and the Linnaean Society.

Like everywhere else in the park and city, there will likely be people nearby, but they shouldn’t get in the way of your birdwatching. “I’m not sure if anywhere could be considered ‘off the beaten path’ in Central Park, to be honest,” says Paul Sweet, an ornithologist at the neighboring American Museum of Natural History.

Central Park stretches less than three miles on its long side, so it’s relatively easy to get a full picture of the park, particularly if you take public transit between places you want to see. Nevertheless, it's worth allotting a half- to a full day to explore the habitats it offers, depending on your ambitions and interests. While it certainly won’t be the most pristine landscape you’ve ever birded in, it will be an experience like no other. And don't worry: Nobody will blink an eye at you craning with your binoculars for a better look at a bird. “It’s Manhattan—everyone’s in their own bubble,” Deutsch says. “You just do your own thing.”