Winter botanizing, especially trying to identify deciduous trees without leaves to guide the way, can try one's patience. Sometimes you can place a tree in its proper family by the shape of its naked silhouette, or the look of the bark. So, you're pretty sure you've got an oak, but which oak? The hickory by the fenceline has shaggy bark, but that's not conclusive proof it's a shagbark hickory. At this point, if you're persistent, you get out a magnifying lens and begin examining buds, leaf scars, twigs, the pith, while referring to complex keys. 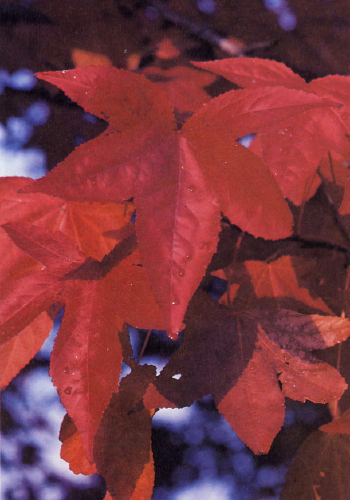 A few trees, however, continue to shout their names long after the foliage has fallen. The American sweetgum (Liquidambar styraciflua) , for instance. Though empty of seeds, its unique fruits hang from the branchlets all winter long, hard spiny balls an inch and a half in diameter. The sweetgum's leaves also are remarkable--star-shaped, up to seven inches long, thick and leathery with deeply cut lobes. And they depart the tree with a blaze of glory. In a nearly pure stand of sweetgums, the autumn colors of those five-pointed stars can land any place on the spectrum between orange and fire-engine red. 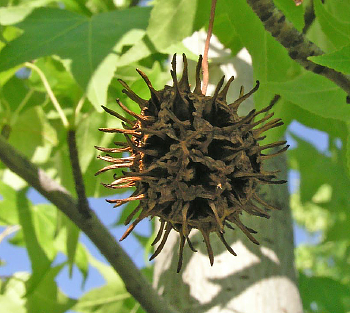 A kin of witch-hazel, sweetgum belongs to a minuscule genus of only four or five trees, the others found in Asia. The generic name, Liquidambar, means, literally, "liquid amber" and refers to the pleasant-tasting resin that the tree exudes when you peel away the deeply furrowed bark. It was once used commercially for making soaps, adhesives and drugs. And the sweetgum's dark, reddish-brown wood is valued as a veneer for fine furniture. In some areas, sweetgum is second only to oak in hardwood production.

Sweetgum is largely a tree of the Southeastern states, although its range stretches northward along the Atlantic coast into Connecticut. On rich alluvial soils, sweetgum can attain a height of 130 feet, usually growing in association with tuliptrees, hickories, oaks and bald cypress. In many southern towns, the species is as widely planted for shade as maples are in northern communities.