When I tottered downstairs for an eye-opening cup of coffee this morning I was both startled and delighted to find a luna moth clinging to the screen door. The lime-green luna with its four-inch wingspan and long twisted tail is, in my opinion, the most beautiful of the giant silkworm moths in North America. That's a bold statement, for the Saturnidae family includes some magnificent specimens, among them the cecropia, polyphemus and promethia moths. 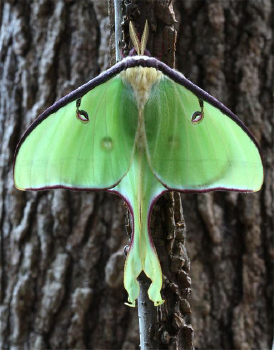 The night-flying luna, recently popularized in a very creative television commercial for a sleeping aid, is an inhabitant of hardwood forests in the eastern states where its caterpillar feeds on the leaves of walnut, hickory, paper birch, sweet gum and persimmon trees. Perhaps the larva of this particular luna wrapped itself in a leaf on the birch that's the centerpiece of my dooryard green garden where it is surrounded by a collection of native ferns. The adult would have emerged from the cocoon yesterday morning, dried its fragile wings during the day and set off in search of a mate in the evening, only to be distracted by our porch light.

Luna moths in our area typically fly from early June to the first week of July. Their lifespan is about one week, and this together with their nocturnal habits make them a rare discovery even though the species is a fairly common one over most its range, especially in the Northeast. This luna was only the third or fourth I've seen in 30 years at Seasons. Fearing that it would tumble off the screen because of high traffic, I gently lifted the moth and moved it to the sanctuary of a nearby holly. A tragic error on my part. The lovely creature tumbled to the ground and was immediately pounced on by Trouble, our blue-eyed white cat, who streaked out of nowhere.

It could be years before I see another moon moth.

[A great website about North American butterflies and moths]