It's early August, and the starring role among field and roadside wildflowers in the Northeast belongs to Queen Anne's lace, yet another colonist from the Old World. The wild ancestor of our garden carrot, Daucus carota (as botanists know the plant) also has a more or less edible root, but unless you're a wild foods enthusiast or hopelessly lost and starving in some old pasture and have a shovel handy, I would recommend a trip to the supermarket for a bag of the domesticated and much sweeter orange variety.

Queen Anne's lace. (By Les Line, from "A Countryman's Flowers") 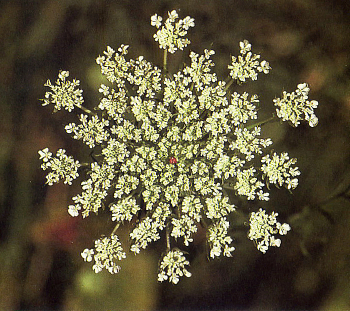 "The name Queen Anne's lace," the naturalist Hal Borland wrote, "pays tribute to the flat-topped heads of florets, dainty as fine lace and pretty enough to deck a queen." The honored monarch was probably Anne of Great Britain, the Queen of England, Scotland and Ireland from 1702 to 1714. Examine the three- or four-inch-wide heads (or umbels), which in turn contain any number of round clusters of tiny individual flowers, and you may find a single red or purple floret in the very center. According to English tradition, Anne pricked her finger with a needle and a drop of blood fell on the lace she was making. It's not as romantic a story, but the real purpose of this odd floret is to attract pollinating insects. The leaves on the three-foot-tall stalks, meanwhile, are favored by the munching caterpillars of black swallowtail butterflies 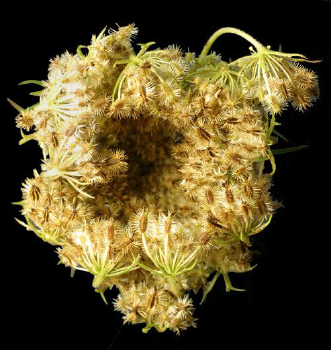 As Hal also noted in our book A Countryman's Flowers, the plant is sometimes called "bird's nest" because as the flowers ripen into seeds, the stems curl upward and form a cup-shaped basket. Its seed production is copious, which accounts for the forests of Queen Anne's lace in untended fields. And like many other wild plants, wild carrot has had its place in herbal medicine. Two thousand years ago, Hippocrates described the use of a teaspoon of crushed seeds for natural birth control, and it is still being used today for contraception.