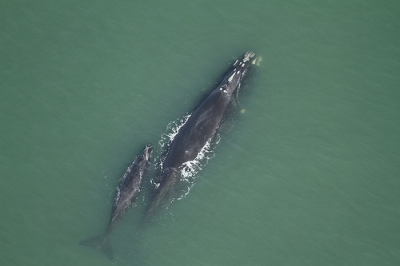 A federal judge just signed a potential death warrant for the straggling population of endangered right whales. On September 6 the judge gave the U.S. Navy the go-ahead to build an undersea warfare training range close to the right whales’ only known calving ground in North Florida. The facility will inundate the surrounding waters with sonar, which has disastrous effect on whales and other marine mammals.

With only 300 individuals left in the world, North Atlantic right whales are the most critically endangered species of large whale. This massive species was called the right whale by whalers because they were the “right” whale to kill. Swimming slowly close to shore, they made easy targets.

Hunting ceased in the 1930s following the Convention for the Regulation of Whaling, the predecessor to today's International Whaling Commission. By then it was almost too late—the right whale population was already decimated, and things haven’t improved since. Like other large mammals, right whales are slow breeders. Females do not reach sexual maturity until they are about nine years old, and they only breed every three years.

Right whales spend much of the year in the waters off of Nova Scotia, near the Bay of Fundy, where they feed on plankton like krill and copepods. But as winter arrives the whales migrate south along the coast to give birth to their calves in the warm waters off of southern Georgia and northern Florida. The small patch of ocean is the only known calving area for right whales.

Despite acknowledging the plight of the right whale and the importance of its only calving ground, U.S. District Judge Lisa Godbey Wood ruled that the Navy could build its proposed offshore submarine warfare training range. The Natural Resource Defense Council, along with other state and national environmental groups, originally filed suit against the Navy and the National Marine Fisheries Service in 2010, arguing that they had not adequately assessed the impacts on the environment and wildlife.

The $100 million facility will span nearly 500 square miles of ocean perilously close to the calving grounds. There the Navy will train submarines, ships, and aircraft, putting whales and other sea mammals at risk of both ship strikes and sonar.

Right whales are especially vulnerable to fatal collisions with ships because of their dark color and lack of a dorsal fin. The danger increases for calving mothers, who spend a lot of time near the surface as they give birth and as their young develop the lung capacity to dive deeper. Currently, the Navy’s only way to avoid ship strikes is by visual detection, which does not bode well for the fate of nearby whales.

Just as menacing is the threat of sonar. While underwater noises might not seem threatening, they can be deadly for ocean mammals. Sound travels through water much faster than air, and can be deafening to marine mammals miles from the source. Loud blasts of sonar often cause whales to surface quickly, and the rapid change in pressure can lead to bleeding from the ears and eyes. Its also suspected to cause inner ear.

Naval sonar has already been linked to multiple marine mammal deaths, notably the stranding of whales and dolphins in the Bahamas in 2000. Scientists found internal hemorrhaging and bleeding in the ears and brains of the stranded whales. Injured and disoriented, the whales helplessly washed ashore. Another stranding occurred in North Carolina’s Outer Banks in 2005, when 34 whales beached shortly after Navy sonar training.

In addition to traumatic injury or death, sonar can also disrupt normal whale activity like navigation or feeding, cause panic and disorientation, and make it harder for whales to detect predators. Even whale watching boats can cause hearing trouble and make it hard for whales to communicate.

Mothers and newborns are stressed and vulnerable, even without nearby waters teeming with with deadly ships and menacing sonar. Perhaps even more rancorous is the Navy’s refusal to give the baby whales a fighting chance by restricting sonar use during the calving season. It’s not hard to see how this court decision will likely spell disaster for right whales.

Related Links:
How Many Songs Can a Bowhead Whale Sing?

Arctic Drilling Noise and Shipping Traffic May Cause Problems for Whales