A casual stroller down Manhattan’s East 20th Street might overlook an unassuming, low-story building that huddles just west of Broadway, camouflaged in large bricks the color of cocoa powder, quiet windows, and a hunter green door. But this brownstone is noteworthy, to say the least, as a national historic site marking the spot where our nation’s first conservationist president was born: Theodore Roosevelt.

Enter on the ground floor and you’re transported into an upscale, mid-19th century abode like the one in which Roosevelt lived until 1872, when he was 15. I had a chance to tour the site two weeks ago, as a prelude to New York City’s National Parks Week, which runs from September 19-27. Organized by the National Park Service, PBS, and the National Parks Conservation Association, an independent advocacy group, the weeklong event celebrates the country’s 391 national parks—10 of which can be found in NYC and northern New Jersey alone.

The Roosevelt house open to tourists is actually a replica of the president’s childhood home, which he sold later in life after contracting malaria on a trip to Brazil. The building was then replaced with another, until a group of women lead by Eleanor Roosevelt (the president’s niece) decided that the old homestead should be reconstructed. Forunately, the female architect hired for the job had a nearly perfect model in the house next door, in which Theodore’s uncle had lived and which was practically identical to the president’s childhood residence.

Many pieces of  furniture and accoutrements are original to the Roosevelt family, including the master bed, elegantly fashioned out of satin wood with rosewood trim, and a medicine ball in the nursery, symbolic of Roosevelt’s lifelong aspiration to be physically fit—he once compared himself with a bull moose—despite, or perhaps better said, because of his affliction with asthma growing up.

Visitors can peruse various Roosevelt paraphernalia in a gallery downstairs, including his Rough Rider suit, as well as the shirt he was wearing during an assassination attempt (after which he proceeded to deliver a 90-minute speech, the bullet still lodged in his body. If that doesn't say "tough," what does?).

The man of soft speech, big stick fame is renowned for numerous and diverse accomplishments in various arenas. But where the National Audubon Society's mission is concerned, his role as a pioneering conservationist stands out. In fact, the April 1899 edition of Bird-Lore (Audubon’s precursor) published a letter written by Roosevelt—then New York’s governor—to the magazine’s editor, the renowned ornithologist Frank Chapman, that was read at the annual meeting of the New York State Audubon Society, held in the American Museum of Natural History on March 23 of that year (incidentally, Roosevelt's father donated the land the AMNH sits on). To me, the missive seems to reflect the mindset that drove Roosevelt toward many environmental decisions:

I need hardly say how heartily I sympathize with the purposes of the Audubon Society. I would like to see all harmless wild things, but especially all birds, protected in every way. I do not understand how any man or woman who really loves nature can fail to try to exert all influence in support of such objects as those of the Audubon Society. 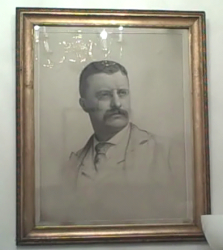 The Loon ought to be, and, under wise legislation, could be a feature of every Adirondack lake; Ospreys, as every one knows, can be made the tamest of the tame, and Terns should be as plentiful along our shores as Swallows around our barns.

A Tanager or a Cardinal makes a point of glowing beauty in the green woods, and the Cardinal among the white snows.

When the Bluebirds were so nearly destroyed by the severe winter a few seasons ago, the loss was like the loss of an old friend, or at least like the burning down of a familiar and dearly loved house. How immensely it would add to our forests if only the great Logcock were still found among them!

The destruction of the Wild Pigeon and the Carolina Paroquet has meant a loss as severe as if the Catskills or the Palisades were taken away. When I hear of the destruction of a species I feel just as if all the works of some great writer had perished; as if we had lost all instead of only part of Polybius or Livy.

After reading this note, it's understandable why Roosevelt declared a site that had been ransacked by plume hunters as the nation’s first wildlife refuge—specifically, Pelican Island on Florida’s Indian River. In “Where Wildlife Rules” (Audubon, April-June 2003), Frank Graham Jr. describes the spot as “an unlikely 5.5-acre lump of shells and mud”—but one that harbored thousands of pelicans. Chapman wanted the island protected and appealed toh Roosevelt, who designated the "lump" a preserve, thus creating the foundation of our National Wildlife Refuge System.

All in all, our nation’s 26th president set aside 51 refuges before he left office in 1909. Now the refuge system has expanded to every U.S. state, under the stewardship of the U.S. Fish and Wildlife Service.

Roosevelt also helped shape our national park system. In 1906, he signed the Antiquities Act, thereby establishing a federal policy to protect historic or prehistoric ruins or monuments, as well any object of antiquity, on land owned or controlled by the federal government. The Act also instituted a permitting process for research of antiquities and a penalty for unauthorized access to them. Finally, it provided the president with a means to set aside places for special preservation. (Prior to 1906, specific areas had been set aside as parks or reserves, each requiring an act of Congress as well as presidential approval; the Antiquities Act made the whole process more efficient.)

During his administration, Roosevelt established six national parks and 18 National Monuments, including Devil’s Tower in Wyoming and Arizona’s Grand Canyon. In so doing, he helped lay the blueprint for the National Parks Service, which Woodrow Wilson created in 1916, and set a precedent for other presidents who added sites to the park system, including FDR, JFK, Truman, Nixon, Carter, and Clinton.

If there were ever a time to recognize and honor our national parks (and those who take care of them), it’s now, during this time of environmental flux. And this doesn’t mean you have to book a ticket out of state—as the tour I went on proved, there are parks and monuments all around, maybe even in your own neighborhood. Just keep an eye out. A wide-brimmed hat—attached to a knowledgeable ranger—is a good clue that you’re close to re-discovering a national treasure.

Finally, meet a 23-year-old who traced naturalist John Muir’s footsteps in search of inspiration for new strategies in conservation.